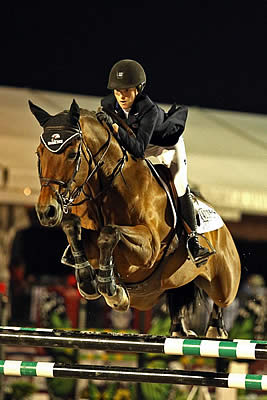 Each year this award is presented to a young rider in one of the Olympic disciplines who exemplifies both sportsmanship and horsemanship. In 2015, Deslauriers’ career took off when she captured the “Grand Slam” of show jumping for a young rider, winning Individual Gold and Team Silver at the Adequan/FEI North American Junior and Young Rider Championships, Individual and Team Gold at the Neue Schule/USEF National Junior Jumper Championships, and Individual Gold at the 2015 USEF Under 25 National Championships.

Sixteen-year-old Deslauriers was presented with this prestigious award at the USET Foundation’s Olympic and Paralympic Games benefit, Rockin’ Rio, on Jan. 22, in Wellington, Florida.

“It’s a huge honor that I wasn’t expecting,” expressed Deslauriers. “I’ve received this thanks to the incredible team I have behind me and my group of horses. I’m very thankful that I’ve been recognized and have received this honor.”

“I think that is part of the reason that I was able to accomplish these goals, because I didn’t get caught up in how I had done previously or how much I had ahead of me, but took it step-by-step,” she said. Deslauriers quickly added, “I also think that it’s important that I don’t get too caught up in how successful this year was. I’m definitely very lucky to have the results that I did. I am looking forward to competing next year and continuing my partnership with Hester. Hopefully we’ll continue to do well as we bond and move up and forward into next year.”

Lucy’s father, former Olympian Mario Deslauriers, originally rode Hester, a 10-year-old Dutch Warmblood gelding, but when Lucy took over the reins, it was an even better match. “He’s really incredible in a number of ways, but I think that something that really stands out about him in particular is his fight,” noted Lucy. “I always know that he’s going to be there for me trying his best 200 percent of the time. It’s really important to have a dependable partner like he has proved to be for me.”

In 2015, Lucy’s success was not only related to the show jumping arena, as she also took top honors in the 2015 George Morris Excellence in Equitation Championship and placed second in the 2015 ASPCA Maclay Horsemanship Championships.

“The equitation division has provided a great base for my jumper riding and doing the jumpers with my father has also helped a lot in the equitation ring,” she commented. “I think that the courses are often very similar.”

This year, Deslauriers’ goal is to move into the 1.50m division with Hester, where she already had success competing against the best in the world during the Bromont CSI3* over the summer. Deslauriers concluded, “In the more extended future, being able to represent the United States is something that I have dreamed of for a very long time, so that would be an amazing goal for me to accomplish.” 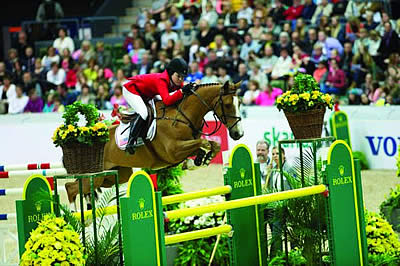 Gladstone, NJ – January 28, 2014 – The United States Equestrian Team Foundation is pleased to announce that the recipient of the 2014 Lionel Guerrand-Hermès Trophy is the talented show jumping rider Katie Dinan of New York, NY and Wellington, FL.

Each year this award is presented to a young rider in one of the Olympic disciplines who exemplifies both sportsmanship and horsemanship. In 2013, Dinan had a breakthrough year competing at her first World Cup Finals and representing the United States at the Furusiyya FEI Nations Cup Jumping Final in Barcelona, Spain.

Dinan was presented with this prestigious award at the USET Foundation Gala on January 24th, in Wellington, Florida. “I am very honored to be this year’s recipient of the Lionel Guerrand-Hermès Trophy,” Dinan commented. “Past recipients of the award include riders whom I look up to as well as some of my incredibly talented contemporaries. I am excited to have my name join the list and to be recognized by the USET Foundation as a young rider who demonstrates sportsmanship and horsemanship, two qualities I aspire to embody in this sport.”

For a young rider to achieve consistent success is not an easy feat, and to do it while carrying a full course load at college is even more impressive. In 2013, Katie Dinan managed to do just that. She competed in her first ever World Cup Final in Gothenburg, Sweden, and she then went on to represent the United States during two Nations Cup events. Two clear rounds helped her clinch the Furusiyya Rider of the Day Award at Spruce Meadows, and she was also a part of the third-place team in Dublin. In September, Dinan was a part of the U.S. team during the Furusiyya FEI Nations Cup Jumping Final in Barcelona, Spain, where she helped them take top honors in the Consolation Round.

“2013 was my first year really competing with the U.S. Team,” noted Dinan. “I had always dreamed of going to the World Cup Finals and competing on Nations Cup Teams. I had amazing opportunities this past year to compete on teams with some of the best riders in our sport and gained invaluable experience. I give tremendous credit to my horse, Nougat du Vallet, who has been an incredible partner for me. Finishing the year with the Grand Prix win at the Alltech National Horse Show was a big moment for us, and it was really exciting to win a grand prix of that caliber.

Earlier in the year she kicked things off with a second place finish in the $125,000 FEI World Cup Grand Prix to qualify for the Finals, and she then went on to win the $100,000 Old Salem Grand Prix. She concluded the year with a fantastic victory in the Alltech $250,000 Grand Prix at the Alltech National Horse Show aboard Nougat Du Vallet.

Dinan is star outside of the ring as well. She is a 20-year-old sophomore at Harvard University, where she is studying Human Developmental and Regenerative Biology.

“While balancing riding and school can be hectic, I am incredibly lucky to have an amazing team at our farm, Staysail,” commented Dinan. “This allows me to go back and forth from school to competitions. I appreciate the balance gained from both attending university and riding. Looking forward, I hope to have additional opportunities to represent our country and dream of attending championship competitions.”

Dinan concluded, “I would like to take this opportunity to thank all the people who have coached me, especially McLain Ward, the recipient of this same award in 1991, who gave me invaluable guidance over the past three years. I am also very grateful to Craig Pollard, who runs our farm, and Camilla Pettersson, who takes care of Nougat and Glory Days, for keeping my horses in super form. Most of all, I would like to thank my family for their endless support.”

Wellington, FL – January 28, 2013 – The United States Equestrian Team Foundation is pleased to announce that the recipient of the 2013 Lionel Guerrand-Hermes Trophy is the talented show jumping rider Reed Kessler of Lexington, KY. Each year this award is presented to a young rider in one of the Olympic disciplines who exemplifies both sportsmanship and horsemanship. In 2012, Kessler advanced to the highest levels of the sport, competing during the Olympic Trials and winning the USEF Show Jumping National Championship. After her stellar performance throughout the Observation Events, Kessler and her top mount Cylana were selected to represent the United States at the 2012 London Olympic Games.

Kessler, an 18-year-old graduate of the Professional Children’s School, was presented with this prestigious award at the USET Foundation Reception on January 25th, in Wellington, Florida.

“The list of riders who have stood in this exact place giving this same speech is a truly exceptional group, and I am honored to join their ranks,” stated Kessler. “One year ago, I sat in this audience, wondering how my first Florida show season, free from all the age restrictions, would go. I sat wondering if I would be ready for the approaching Olympic Trials, and most of all, who would make up the team that we would send to London. It did not cross my mind that one year later I would stand here, having been a member of that team. It did not occur to me that my new horse, Cylana, which we were still so unfamiliar with, would carry me to those Games. It is truly amazing what can happen in a year, and when I look back, this will probably be one of the best of my life.”

END_OF_DOCUMENT_TOKEN_TO_BE_REPLACED

Gladstone, NJ – January 30, 2012 – The United States Equestrian Team Foundation is pleased to announce that the recipient of the 2012 Lionel Guerrand-Hermes Trophy will be talented show jumping rider Lucy Davis of Los Angeles, CA. Each year this award is presented to a Young Rider in one of the Olympic disciplines who exemplifies both sportsmanship and horsemanship. In 2011, Davis set the west on fire, winning four grand prix events in a row at HITS Thermal, including the $200,000 Lamborghini Grand Prix of the Desert aboard her brilliant mount Nemo 119.

Davis, a 19-year-old freshman at Stanford University, was presented with the trophy during the USET Foundation’s benefit, “An English Country Evening,” at the Palm Beach International Equestrian Center in Wellington, FL, on January 27, 2012.

“It’s a really big honor and I am very excited to have won the award,” said Davis. “I got the call when I was in the middle of finals, and it really changed my mood. I am very honored because I know there are a lot of really incredible young riders in the United States, so this is really exciting to win.”

END_OF_DOCUMENT_TOKEN_TO_BE_REPLACED

Wellington, FL – February 2, 2011 – The United States Equestrian Team (USET) Foundation Board of Trustees hosted a cocktail reception on Friday, January 28, 2011, to honor the equestrian athletes that represented the United States during the 2010 Alltech FEI World Equestrian Games (WEG), the recipients of the Foundations’ Gold Medal Club Anniversary Awards, the Lionel Guerrand-Hermes Trophy, and the Whitney Stone Cup. The reception was held at Player’s Club in Wellington, FL.

The party also recognized members of the Gold Medal Club, the most loyal and generous supporters of the USET Foundation. These individuals have been a vital and essential source of support to the U.S. equestrian teams. Special awards were presented to those supporters recognizing their giving at the Gold Medal Club level for 10, 15, 25 and 30 years.

END_OF_DOCUMENT_TOKEN_TO_BE_REPLACED

Gladstone, NJ – January 13, 2011 – The United States Equestrian Team Foundation is pleased to announce that the recipient of the 2011 Lionel Guerrand-Hermes Trophy will be talented eventing rider Tiana Coudray. Each year this award is presented to a Young Rider in one of the Olympic disciplines who exemplifies both sportsmanship and horsemanship. In 2011 Coudray had a banner year, winning the Jersey Fresh CCI*** and the Galway Downs International Horse Trials CIC***, as well as leading the U.S. efforts at the Boekelo CCI*** in Holland.

“When the USET Foundation told me that I was the winner of this year’s award I went and looked it up,” commented Coudray. “I was pretty honored to look at the other names on the list throughout the years and think of what those people have gone on to do later in their careers.”

Over the years, Coudray has consistently shown her talent as a young rider. She won Team Gold at the North American Young Riders Championships in both 2004 and 2008, and took home the Individual Silver Medal in 2004. She has won the United States Eventing Association Young Rider of the Year Award an amazing three times in 2005, 2007, and 2009.