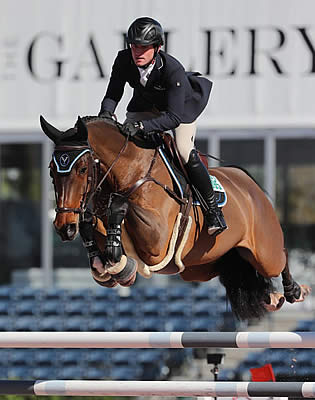 Wellington, FL — January 11, 2019 — Ireland’s Darragh Kenny and his mount, Billy Dorito, bested a field of 68 entries to win the $6,000 Bainbridge 1.40m Speed Challenge by a margin of more than three seconds on Friday, January 11, during the first week of the 2019 Winter Equestrian Festival (WEF) at the Palm Beach International Equestrian Center (PBIEC) in Wellington, FL.

In Friday’s featured $6,000 Bainbridge 1.40m Speed Challenge, Kenny and Billy Dorito were the seventh entry to contest the Eric Hasbrouck-designed track, stopping the clock in a quick and clear 71.221 seconds. While 21 entries would jump clear throughout the class, none would catch the early time to beat set by Kenny and the nine-year-old bay Anglo European Studbook gelding (Billy Mexico x Vechta) owned by Vlock Show Stables LLC.

After a year-long hiatus from the E. R. Mische Grand Hunter Ring at the Palm Beach International Equestrian Center, Laurie Stevens and her own Santiago returned ready to win. The pair performed consistently throughout the division with two firsts, a second, a third, and fifth to capture the grand championship title during Week 1 of the Winter Equestrian Festival.

“Two years ago, I was reserve champion for the entire circuit, but then I had an accident in July of 2017 that forced me to take the entire last year off,” Stevens said. “So, I haven’t even been in this ring in two years.”

The pair made their first debut back into the Adult Amateur division in July and have been working hard to be ready for the winter season since.

END_OF_DOCUMENT_TOKEN_TO_BE_REPLACED

Wellington, FL – February 17, 2012 – The FTI Consulting Winter Equestrian Festival featured events at two facilities today. At the Stadium, the $30,000 WEF Challenge Cup Round 6 had grand prix competition with Reed Kessler of Armonk, NY, taking three of the top four spots. She scored the win with Cylana, was third on Ligist, and fourth with Pacha de Nantuel. Tina Fletcher (GBR) and Unique IX were second. In the International Arena, the FarmVet Amateur-Owner 3’3″ divisions awarded age division championships to Laurie Stevens on Iceman and Elizabeth Faraci and Paramour.

Week six of the FTI WEF, sponsored by Equine Couture/Tuff Rider will run February 15-19. The week is full of exciting events, including Saturday night’s USHJA WCHR Hunter Spectacular of Palm Beach, and Sunday’s $50,000 G&C Farm Jumper Derby held at The Stadium. The 2012 FTI Consulting Winter Equestrian Festival has 12 weeks of competition that conclude on April 1, 2012, and they will be awarding more than $6 million in prize money through the circuit.