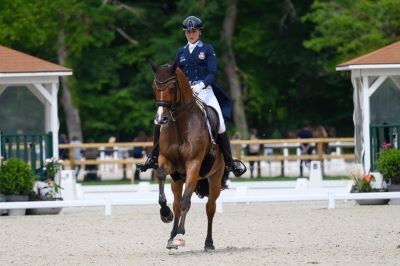 Heading into the final day of competition at the FEI Dressage Nations Cup™ in Compiègne (FRA), it was apparent it would take a monumental shift in momentum for Sweden to relinquish its grasp on the lead. Still, the dominance with which the squad of Juliette Ramel (Buriel K.H.), Antonia Ramel (Curiosity), and Patrik Kittel (Touchdown), led by Chef d’Equipe Jo Bena, executed victory was eye-opening. When Kittel and Touchdown received an 82.025 percent score for their Freestyle, it left Sweden’s final margin of victory at 32 points. Spain (48 points) finished second, with Belgium (51 points) third.

The win marked the third for Sweden at Compiègne in the last five years, having also triumphed in 2018 and 2021.

“We were a bit ahead of the others this time, and I’m very happy about that. They are doing so well in the ring and also in their training, and it looks very promising for the future,” said Chef d’Equipe Jo Bena (SWE).

Each point was equal to an athlete’s placing, with lower numbers reflecting top performances. All athletes competed in Saturday’s Grand Prix before splitting across Sunday’s Grand Prix Special and Grand Prix Freestyle tests, with the three best results tallied. No Swedish rider received a point tally in double digits, with all three making the podium in at least one test. After recording just 10 points from the Grand Prix, Sweden was even more dominant on Sunday, adding just six points to their score. While Kittel was the highest placing Nations Cup rider in the Grand Prix Freestyle, Juliet Ramel finished second in the Special (75.277%), with Antonia Ramel just behind her in third (72.043%).

“The horses have done very fault-free tests, and if there have been small faults, we have still be able to pick it up with high points,” Kittel said. “I think that’s what I’m most happy with. The thing is: the horses have all just been there for us through the entire weekend.”

Sweden put forth a squad of veteran riders — each an Olympic veteran — but the horses brought forward were mixed in experience. Touchdown had only performed two previous Freestyle tests at the CDI5* level and had never before contested a CDIO event. Curiosity, formerly trained in jumping, is also new to the level, having represented Sweden in one previous Nations Cup event at Aachen (GER).

“He’s been with me for a long time,” Antonia said. “He was in the beginning a jumping horse, which he did until he was six. I’ve educated him on my own, and I’ve had him now for seven years.”

“It means a lot [to start the season strongly]. It’s always good to have a victory in a five-star Nations Cup to start with, and then we can go on with the rest,” Bena said. “And we have been lucky and also good, I would say, [in previous years], because we have won in Compiègne before. We like it very much here.”