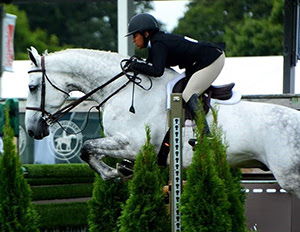 This year, the Washington International Horse Show Honor & Service Award, sponsored by the EQUUS Foundation, is being presented to Jane DaCosta, the Executive Director and Founder of Metropolitan Equestrian Team (MET).

Jane founded MET to cultivate young, aspiring athletes in grades 3 through 12 by developing their talents through horseback riding. They also provide resources to help the kids curate their college experience by giving them access to educational resources that allow students to expand their way of thinking about academics.

Jane grew up participating in equestrian sports, learning not only horsemanship and athleticism, but also leadership skills, the value of teamwork, and responsibility from the sport. As a competitor, Jane was an undergraduate rider for Long Island University/C. W. Post Intercollegiate Horse Show Association (IHSA) Equestrian Team. Jane has competed and shown successfully in United States Equestrian Federation (USEF) Horse Shows ranging from “C” to “AA” rated shows for over 30 years in Equitation, Hunters, and Jumpers.

Jane is a graduate of St. Leo University and an Electronic Warfare Technician Third Class Veteran of the United States Navy. Jane is also a Graduate student at New York University Stern School of Business enrolled in the Executive MBA Program.

Through her experiences, Jane was inspired to create the MET program. During practices, students learn horsemanship, sportsmanship, and agricultural skills, similar to Jane’s experiences in the sport. MET helps students with college preparation through various education programs. They also provide access to representatives from colleges and universities, and highlight scholarship opportunities. Through its academic programs over the years, MET students have received over $1,600,000 in college scholarship opportunities.

Jane and her team have created a supportive, encouraging environment at MET that instills a sense of belonging. Many MET Team members are kids who, prior to joining the MET Team, had never set foot on a farm. MET helps open their eyes to a new world, then teaches them how to contribute to and care for it.

At MET, Jane brings horseback riding to kids of all backgrounds – and helps educate the next generation of leaders. Jane has helped MET grow to a national organization, providing programs throughout the country in New York, New Jersey, Connecticut, Wisconsin, Utah, Texas, Georgia, Mississippi, and Tennessee.

Jane will be recognized by WIHS and EQUUS Foundation during a virtual awards ceremony in October. As the recipient, the Metropolitan Equestrian Team will receive a $1,500 grant from the EQUUS Foundation.

The WIHS Honor and Service Award was created in 2013 following the induction of Klinger into the Horse Stars Hall of Fame in 2013. Klinger, a member of the Caisson platoon of the 3d United States Infantry (The Old Guard), was the inspiration for the award and its first recipient. The Honor & Service Award recognizes a horse, individual, or organization that best demonstrates the values of honor and service as embodied by Klinger.