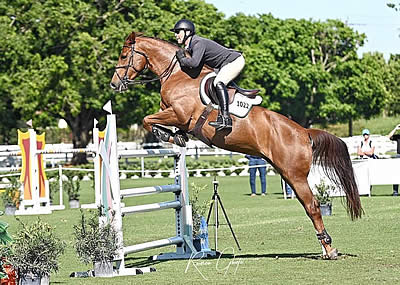 Wellington, FL (March 25, 2019) – The 2019 Turf Tour has been dominated by one rider this year: Ireland’s Willie Tynan. For the second week in a row, Tynan jumped to victory this time aboard Shannon Hughes’ speedy mare Dominique in Friday’s $15,000 Sidelines 1.40m Turf Tour Grand Prix, held on the gorgeous grass fields of Black Watch Farm. With his most recent Grand Prix win, Tynan snatches the cumulative points lead in the Turf Tour’s Grand Prix, 1.30m Rising Star, and 1.20-1.25m divisions and is poised to win the prize of a custom golf cart presented by Iron Horse Transit, the official horse carrier of the 2019 Turf Tour.

Due to a rainy forecast for Wednesday, the Turf Tour’s $5,000 Pegasus Laser Therapy 1.30m Rising Star Classic and the day’s full divisions of show jumping were shifted to Wednesday, where James Chawke and Chalan flew to victory over the course designed by Olympic course designer Leopoldo Palacios. Second went to Ilan Bluman and F. Brightwood Lynz, while Katherine Benard and Cap Diamond D’hof Ten Bos rounded out the top three. Designed to be a platform for young horses to build their skills towards the Grand Prix, the Rising Star was sponsored this week by Pegasus Laser Therapy, which provides pain reduction, encourages healing, and helps maintain peak condition in equine athletes.

Tynan and Dominique are known for their blazingly fast jump-offs, and Friday’s Sidelines Turf Tour Grand Prix proved no variation from their modus operandi. The second to last Turf Tour Grand Prix of the year featured 33 riders, which included iconic show jumping names as Ben Maher and Tic Tac. With a final time of 36.657, Tynan and Dominique edged out this week’s Rising Star champion, Ilan Bluman and F. Brightwood Lynz, by exactly one second; the pair finished on 37.657. Third went to Tynan again, this time aboard Fancy Girl, double clear in 37.703. Tynan now stands as the cumulative points leader in the Rising Star, Grand Prix, and 1.20-1.25m divisions going into the Turf Tour Finale March 27-29 at Black Watch, where all classes are worth double points towards the Iron Horse Transit custom golf cart. 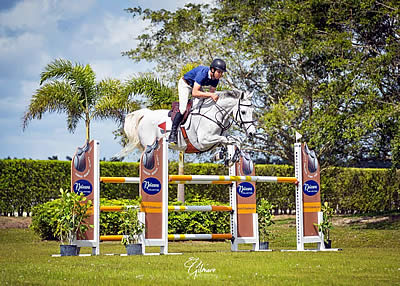 Wellington, FL (February 15, 2018) – James Chawke was feeling the love during 2018’s Valentine’s Day Turf Tour, where he and the Irish bred Flemis Bouncer bounded over the 1.30m course to rule the week’s $5,000 Rising Star Classic. The spectacular day of show jumping was highlighted by Chawke’s win, along with bald eagle sightings, a busy 1.20m class on the grass in the morning, and .80m-1.10m jump-offs and power & speed rounds running all day in Ring 2. Hosted by The Ridge at Wellington and at their home farm during Valentine’s week, Friday’s continuation of the Turf Tour promises more splendid show jumping including the $15,000 1.40m Turf Tour Grand Prix and wine tasting provided by The Vineyard House.

A relatively new mount for Chawke, of Leinster, Ireland, Flemis Bouncer recently topped an early February 1.20m class during this year’s Turf Tour and shows no signs of slowing the momentum. The game gray gelding galloped to a winning jump-off time of 33.155 seconds, and Chawke says the next steps are to continue to elevate both the jumps and their technique for the Grand Prix. The luck of the Irish held out for Chawke’s countryman Willie Tynan, whose 33.266 second jump-off with the elegant mare Dominique narrowly cut him out of first place in the class with just over a tenth of a second to spare. Samantha Bairs and Italian Gold van de Kruishoeve jumped to third on a time of 35.972 seconds.

“The Turf Tour’s Rising Star Classic is designed to serve as a foundation for advancing riders or new horse and rider pairings, giving them the atmosphere, jumps, and competition to seamlessly transition to the Grand Prix or achieve their own personal goals,” said US Olympian and co-founder of The Ridge and Turf Tour, Nona Garson. “The 1.30m level is such an important time for both horses and riders to develop the skills needed for a successful Grand Prix career. It is at this height that riders must evaluate their own strengths and weaknesses as well as those of their mount, and learn to apply strategic riding and a focused, competitive mind. Providing a variety of venues, excellent natural footing, and surmountable challenges on course is our way of nurturing these horses and riders and ultimately was the inspiration for the Turf Tour.” 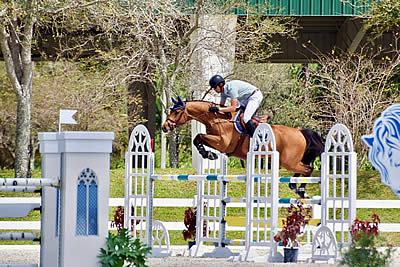