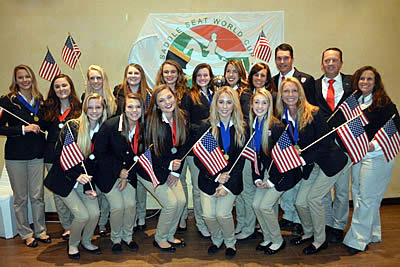 The stage for the competition was set on Monday when the athletes drew for the horses they would ride during the three-day competition. On Monday and Tuesday, the athletes participated in training sessions where they had 20 minutes to familiarize themselves with horses drawn by each team – a true test of their riding skills. During the competition, the amateur athletes competed for individual scores, which ultimately accumulated toward a total team score. The Three- and Five-Gaited sections rode in two phases held over three days: rail work, where the athletes competed as a group, and then individual workouts.

Competition officially got underway on Thursday afternoon with the railwork phase. In front of the judging panel of Terry Johnson (Surrey, British Columbia, Canada), Cindy Mugnier (Belchertown, Mass.), and Aretha van Rooyen (South Africa), the U.S. Team members confidently rode their unfamiliar mounts and performed well in the first phase. On the second and third day of competition, the U.S. athletes once again produced great efforts in the individual workouts.

“I thought the team performed very well under pressure in the 2016 World Cup. It’s not easy for the riders to perform on horses that they have hardly ridden, and our team did a fabulous job with the horses we paired them each with,” coach David Cater said. “We could not be more proud of the team as a whole and both the Three- and Five-Gaited teams had brilliant performances. More importantly, they came together as a team which made the whole event more meaningful.”

The U.S. Team and supporters were thrilled with the final results announced at Saturday evening’s Award Ceremony. The Three-Gaited section of the U.S. Team received stellar scores to win its Gold medal with South Africa and Canada earning Silver and Bronze, respectively, and Namibia finishing in fourth.

The U.S. Three-Gaited section consisted of:

In the Five-Gaited section, the U.S. Team rode well in the challenging competition to win the Silver medal with South Africa earning Gold and Canada collecting Bronze.

The U.S. Five-Gaited section consisted of:

For more information about the event and a complete list of supporters, visit www.usasaddleseatworldcup.org or contact Lori Nelson, USEF Senior Director of National Affiliate, Competition and Alliance Partner Relationships, at lnelson@usef.org.