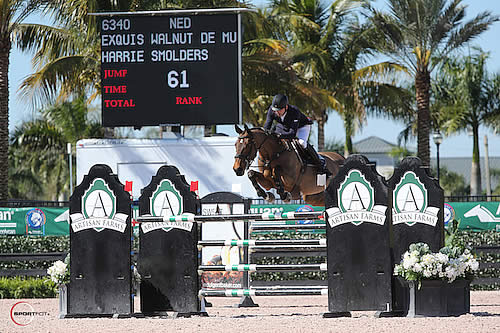 Wellington, FL – February 11, 2015 – The 2015 Winter Equestrian Festival (WEF) began its sixth week of competition, sponsored by Salamander Hotels & Resorts, on Wednesday with a win for Harrie Smolders (NED) and Exquis Walnut de Muze in the first international jumper class of the week. Smolders and his veteran partner of eight years blazed to victory in the $34,000 1.45m speed class to kick off the week.

As the hunters are featured on the main show grounds at PBIEC, the highlight jumper competition will be held on the adjacent grounds at The Stadium at PBIEC. The $85,000 Salamander Hotels & Resorts Grand Prix CSI 3* will the feature event in the International Ring at The Stadium on Friday night.

Several of the week’s highlight classes will be available LIVE online at the following links:

Richard Jeffery of Great Britain is the course designer in the International Ring at The Stadium for week six. On Wednesday, Jeffery began the day with 47 entries in the $34,000 1.45m speed class with 16 clear rounds.

Harrie Smolders and Exquis Walnut de Muze, owned by Team Exquis, had the winning time of 64.06 seconds over Canada’s Vanessa Mannix and Dooley’s Deluxe. Mannix took an early lead that held through most of the class in 66.21 seconds, but eventually settled for second. Peter Leone (USA) and My Pleasure jumped the third place round in 67.18 seconds.

Smolders has ridden Exquis Walnut de Muze, a 16-year-old Belgian Warmblood mare (Nabab de Reve x Chin Chin), since she was eight years old. The pair has a long history of success, including many top grand prix victories, and the rider was happy to see his mount back to her winning ways after a little time off.

“I have already had her a long time, and we have had many good shows together,” Smolders said of their partnership. “She had a little injury last year, so she is just coming back, but she has already been jumping fantastic the last two weeks. We have already been close to winning a few times and I couldn’t stay out (of the winner’s circle), the way she jumps. I still needed to be patient and wait for the right moment, but today was it.”

“I know her so well. I know exactly how she reacts and what she is going to do, so that makes it a bit easier,” Smolders said of his winning round. “It was quite a bit of turning in this class, but she knows the game and she always finds the fence. She has a lot of routine, so I only have to stay quiet in the turns because otherwise she wants to go in front of me. She thinks too fast. I have to think a bit slow and just look in the turns and then she finds the fences herself.”

Smolders noted that Exquis Walnut de Muze tends to have her best performances in bigger arenas, but had no problem adjusting to the change of venue this week. The International Ring at The Stadium is a smaller ring that many riders liken to the venues in Europe. When Smolders was last in Wellington in 2012, the facility had just been built to host the Adequan® Global Dressage Festival, and has since transitioned to holding many different events throughout the circuit. He enjoyed the opportunity to compete in a new location and give the horses a different experience.

“I had not been in here yet; this is my first time jumping here,” Smolders noted. “It is like the size of most of the rings on the Global Champions Tour. It is different. The International Arena (at WEF) is way bigger and also the derby field here, but I think it is good to have the change in venue. It is good for the horses to have a different place to show sometimes. It keeps them fresh in the mind.”

Along with Exquis Walnut de Muze, Smolders has top horses Emerald and Don VHP Z in Wellington for the big classes. The mare will compete again in Sunday’s $34,000 Suncast® 1.50m Championship Jumper Classic, while the two stallions will handle the grand prix duties.

“I started Emerald a bit quiet because these are his first outdoor shows this year, but I want to move him up this week to the grand prix,” Smolders explained. “Don, I used the first two weeks for the grand prix, and she [Exquis Walnut de Muze] has done all of the other classes. In the Suncast series she was already clear two times and now she will go again on Sunday.” 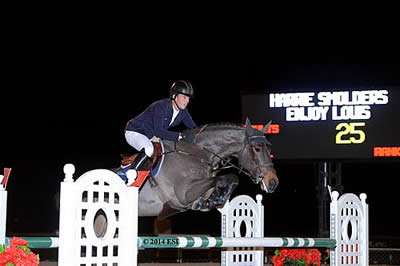 An impressive 63 horse and rider pairs had their eyes on Thursday evening’s $35,000 FEI Sunshine Welcome prize. However, just enough Round 1 faults kept the majority at arm’s length from the top six. Several contenders clocked just split seconds beyond the time allowed so one-fault rides put five more in ribbons after the jump-off riders.

Jos Verlooy and Farfelu de la Pomme commenced the jump-off, followed by Lauren Hester and Abigal, both of which fell victim to downed rails. Third to enter the ring was a hopeful Bliss Heers aboard Prado K, who cleared the course in a swift 42.85. Tensions rose and spectators grew quiet as Audrey Coulter piloting Acorte charged to a clean round, besting Heers, with a remarkable 36.93.

The fifth jump-off attempt from Belgium native Harrie Smolders and Enjoy Louis began and onlookers knew the chase was on. The seemingly aerodynamic duo secured their fate with a quick, clear round in 35.20.

With one still to go, Smolders was sitting pretty, but not in the clear yet. Enrique Gonzalez and Quilebo Du Tillard of Mexico went last, finishing with a time of 34.37 but an unlucky rail at Fence 14 left them in fourth place.