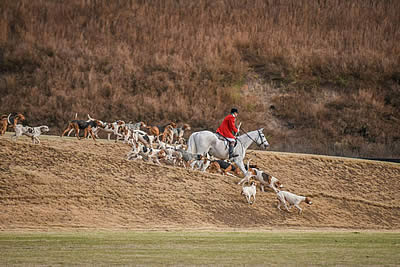 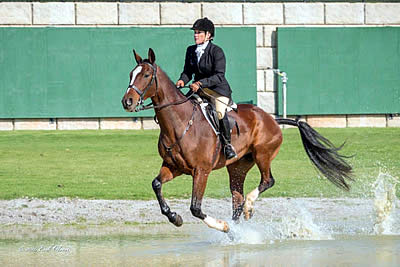 Mill Spring, NC – November 12, 2016 – Anita Crouse, representing Green Creek Hounds of Tryon, NC, piloted her own Rickie to top honors in the Tryon International Equestrian Center Field Hunter Championships presented by Adequan® hosted on the Grass Complex at the venue this afternoon. The TIEC Field Hunter Championships presented by Adequan® served as the highlight of the inaugural “Festival of the Hunt”, which brought together three fox hunting organizations from the region for a week of sport across the Carolina Foothills community.

Crouse and Rickie participated in the organized hunts throughout the week and were selected by judges Snowden Clarke, Linden Wiesman Ryan, Roger Smith, and Thomas Cadier to compete in the TIEC Field Hunter Championships presented by Adequan® as a culmination of the weeklong festivities.

“It was a great experience. My horse handled this very well. It was a little bit nerve wracking at the beginning, but I trust him and here I am,” said Crouse.

As part of the championship event, the top three combinations were asked to return to the complex by the judges, who then rode parts of the course on their respective choices to further exemplify the rideability and braveness of the top three finishers.

“I felt so confident when the judge got on Rickie, especially because the judge, Thomas Cadier, has a horse that is very much a look-a-like to mine,” explained Crouse. “I knew that he’d like him.”

This is the first time that Crouse was offered the opportunity to ride on the Grass Complex at TIEC and it was a memorable afternoon for her and Rickie. She elaborated, “Galloping in the field with all of my friends and other foxhunters will always be a highlight of this week. Just the gala and camaraderie around it is something I won’t forget.”

“It’s exposure to the public for what fox hunting is,” continued Crouse. “It can be such a fun sport and we’re glad that people were able to experience it here.”

The judges are experienced fox hunters and have a breadth of experience between them, participating in numerous hunts across the East Coast. In an effort to gain more attention and participation for the sport, the “Festival of the Hunt” will continue to be a staple of the fall season at the venue for years to come. 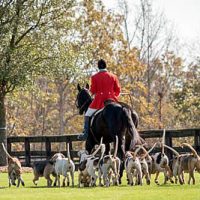 Snowden Clark, who hails from Middleburg, VA, one of the fox hunting capitals of the world, served as a judge for the competition and echoed Crouse’s sentiments, noting that the tradition of the sport, which dates back to the early 1500s, can only grow with festivals and events such as the one hosted at TIEC throughout the week.

“I think what was important about this week is that it showed the diversity of the horses and people who participate in fox hunting and hopefully made for an enjoyable experience for everyone,” he said. “It was a great first event.”

Roger Smith, a partner of the Tryon Equestrian Partners (TEP) and avid fox hunter, also served as a judge for the weeklong competition and is already looking forward to the growth of the “Festival of the Hunt” in the future.

“We hope this becomes a great tradition and legacy for the Carolinas. May I also say to Anita, who hunts all of the time, that I’m so proud of your performance and if anyone deserves the blue ribbon, it’s you,” commented Smith.

As each of the judges touched on the importance of the week, Linden Wiesman Ryan of Blue Ridge, VA was also quick to comment on the stellar performance of Crouse and Rickie, noting, “Anita’s horse was just one that stood out to me all week. It was just lovely and never put a foot wrong. We hope, as Roger said, that this becomes a yearly event and a tradition, ultimately attracting more people to fox hunting.”

“I believe that fox hunting is the foundation for virtually all of the equestrian sports that we love to watch and compete in. I feel that an event like this helps remind all of us, as well as engages spectators too,” added judge Thomas Cadier.

“I would like to thank Linden and Snowden for traveling here and adding their knowledge and expertise in judging to our first event, as well as the lovely young lady who put this all together, Carolyn Cadier. Without her it would not have been as successful as what we saw this year,” concluded Smith.

The event management team also sends its sincerest gratitude to Jim Troppman for his diligence as Master of Ceremonies for the event.

The “Festival of the Hunt” also featured an evening Meet & Greet event with renowned artist and photographer Drew Doggett in the Legends Club Lobby, as his collection “Band of Rebels: White Horses of Camargue” has been on display at TIEC for the past month. For more information on Drew Doggett and to view the collection online, please visit www.drewdoggett.com.

For more information on “Festival of the Hunt” and TIEC, please visit www.tryon.com.