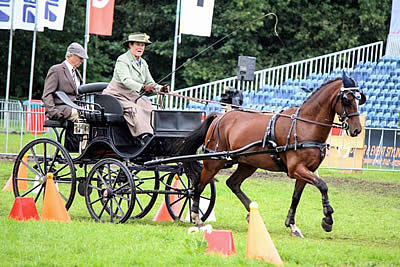 Breda, Netherlands – Tracey Morgan wrapped up a successful showing at the Singles Pony World Driving Championship Sunday with an eighth place finish in the cones phase. Morgan and her own Fuego 88 will leave Breda with a 19th place finish and score of 180.6 overall behind the 2015 World Single Pony Champion Fabian Gänshirt of Germany and World Single Pony Reserve Champion, Martin Hölle of Hungary. Gänshirt earned an overall score of 156.88 and Hölle finished with a total score of 157.55.

“I’m pleased, but I would have liked to have done better. The competition was outstanding and there were a lot of new drivers on the scene. This is the second time driving Fuego 88 in these world championships. He is a wonderful competitor. I’m looking forward to next year and defending our national championship title as well as helping to bring along new talent through the USEF Developing Drivers Program so we can compete on a team level,” said Morgan.

On Thursday, Morgan and Fuego 88 began the competition with a solid dressage test despite the extraordinary amount of mud and rain. The unpleasant conditions made it difficult for Fuego 88 to gain his footing; however, the team muscled through to earn a score of 47.49, good for eighth place. The judges had high standards as only 13 of the 32 teams scored under 50.

Morgan struggled during Saturday’s marathon phase. Unfavorable weather continued which made the course unmanageable for many drivers. Tight turns were especially hard to maneuver in the tough terrain. They finished in 24th place with a score of 130.88.

Morgan came into Sunday’s cone competition in 22nd place overall with a score of 178.37. Morgan drove Fuego 88 beautifully, even though the weather did not cooperate. They were one of nine teams who kept all the balls up, but they added 1.69 in time penalties. Five drivers completed the course perfectly. 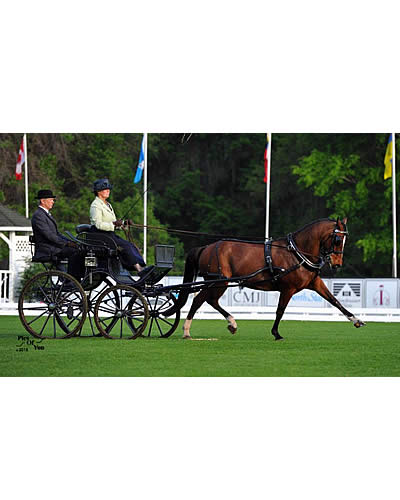 Breda, Netherlands – Accomplished pony driver Tracey Morgan (Beallsville, Md.) will represent the United States this week at the 2015 FEI World Driving Championships for Ponies. The championships will take place during Outdoor Brabant at the beautiful Prinsenhoeve Estate in Breda, The Netherlands, September 2-6, featuring 88 drivers from 16 nations competing across three divisions: single, pair, and pony team. Morgan will drive her own trusted partner, German Riding Pony, Fuego 88, in the single pony division. They join a field of 32 drivers all vying for the chance to be named Singles Pony Driving World Champion.

Morgan is no stranger to these championships having helped the U.S. team win Bronze in 2007 and competing in the 2009 and 2013 championships. That experience will help as she faces tough competition from returning Single Ponies Champion Martin Hölle of Hungary. However, she and Fuego 88 come into the 2015 FEI World Driving Championships for Ponies following stellar performances in national and international competitions.

The 2015 FEI World Driving Championships for Ponies will begin on Thursday with the dressage phase. On Saturday, drivers will test their ponies’ endurance during the marathon phase. The championships conclude on Sunday with the cones phase.