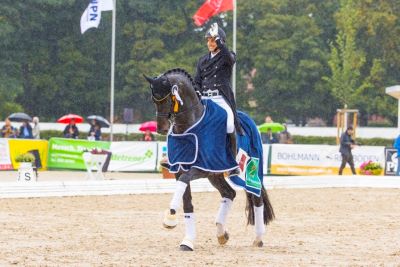 The KWPN stallion Jovian with Denmark’s Andreas Helgstrand on board. (FEI/Leanjo de Koster)

Stallions from the KWPN studbook claimed both the 6 and 7-Year-Old titles while a Danish Warmblood was crowned 5-Year-Old champion at the FEI WBFSH Dressage World Breeding Championship for Young Horses, which returned to Verden in Germany for the 2021 edition from 24 to 29 August.

Fry is no stranger to success in these Championships, taking the 7-Year-Old title with Glamourdale in Ermelo (NED) in 2018, and in Gert-Jan Van Olst’s Kjento she has found another exceptional ride. “When I got all those 10s, I got very emotional, and it is thrilling to see that everyone sees the same quality as we do. He felt his best ever, and I don’t know how to describe this horse – if you look up the word power, he is it!” she said.

Judge Jean-Michel Roudier praised the quality of both the horses and horsemanship he witnessed.

“The improvement in breeding and riding is incredible over the last years. The winner Kjento was a happy horse like all the three medallists – a happy horse means wonderful training and it gives a wonderful willingness in the horse.” — Jean-Michel Roudier

But in Sunday’s medal decider it was the Danish Warmblood stallion Hasselhoej Down Town (Hasselhoej Donkey Boy x Blue Hors Zack), ridden by Sweden’s Jeanna Hogberg, who grabbed the gold with an amazing score of 97.000%. The pair had finished fourth in the opening competition three days earlier, but with 10s for trot and perspective, and 9.5s for walk, canter, and submission, this time they left the rest in their wake. Danciero 7 had to settle for silver with 96.600% while Lightning Star took the bronze with 92.8%. Moller’s second ride, Global Player OLD, just missed out on the podium when earning a mark of 92.600%.

Hasselhoej Down Town was real crowd pleaser. “When I got him, everyone said he’s so cute and he really is, but he’s also a really fantastic horse!” Hogberg said. “I have a great team behind me and I have a lot of support from Andreas (Helgstrand), and I think today it was a matter of riding a really solid test without faults and at the same time showing the best of the horse, and he really stayed with me,” she explained.

“He was a bit surprised by the environment on the first day, but today he was much more relaxed,” Hogberg said. However, she pointed out that the young stallion is no pushover. “He’s also the only horse at Helgstrand that I have fallen off!” she added with a laugh.

Brouwer was delighted with bronze for the mare Lightning Star. “I’ve been riding Lily a long time and know her well but of course with Corona I didn’t get the chance to show her a lot. But she makes me every day happy, also here; she’s always fresh and willing to work. Today maybe there was a bit more tension because there was a lot of applause when you were warming up. But she’s only five and has a great future. I hope I can ride her a lot longer,” the Dutch athlete said.

The last Championship to be decided was the 7-Year-Olds, and Danish riders completely dominated the podium, but it was the KWPN stallion Jovian (Apache x Tango) who claimed the title with Andreas Helgstrand on board.

The Helgstrand name was all over these Championships as owners, sponsors, riders, and producers of top-class Dressage horses, and in Friday’s qualifier, Andreas steered Jovian to victory ahead of the Danish Warmblood stallion Elverhøjs Raccolto (Sezuan 2 x Sandro Hit) ridden by his wife Marianne Yde Helgstrand.

A mark of 89.136 from judges Sharon Rhode (RSA), Ulrike Nivelle (GER), Maria Colliander (FIN), Mariette Sanders van Gansewinkel (NED), and Kurt Christensen (DEN) gave Jovian the title, while silver went to the Danish Warmblood gelding Blue Hors Touch of Olympic L (Don Olymbrio x Fidermark) who posted 83.965 with Denmark’s Nanna Skodborg Merrald on board. And the third Dane on the podium was Anne-Mette Strandby Hansen, who steered the Westphalian gelding Eternity 75 (Escolar x Sir Donnerhal) to a score of 83.75% to pin Pearce and Quando Unico back into fourth place.

“To win with Jovian is special; he is my favourite horse. He is a PR machine for us, and he will have a lot of very nice foals coming up,” said Helgstrand.

Nanna Skodborg Merrald was very pleased to take silver for the Danish Warmblood studbook. “We have had so many good horses for DWB and it is good to give back,” she said. She’s been riding Blue Hors Touch of Olympic L since he was a four-year-old and is looking forward to watching him develop. “I will go into small tour shows with him now, I think he is a future Grand Prix horse,” she added.

And Anne-Mette Skodborg Hansen had every reason to be pleased with Eternity 75 because she’s only been riding him for two months. “Cathrine Dufour trained him and this is my first competition with him!” she said after collecting 7-Year-Old bronze.

Reflecting on another great FEI WBFSH Dressage World Breeding Championship for Young Horses, German judge Ulrike Nivelle commented that this year “we saw huge quality and the level is much better than before, both in breeding and riding. We saw more harmony and softer riding,” she concluded.