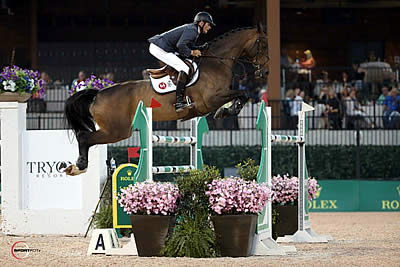 Mill Spring, NC – June 10, 2017 – On a spectacular summer evening at Tryon International Equestrian Center (TIEC), Eric Navet (FRA) and Catypso earned the top honors in the highly anticipated $216,000 Horseware® Ireland Grand Prix CSI 4* with a jump-off time of 41.485 seconds to take the win. Hunter Holloway (USA) and VDL Bravo S secured the second place position with a time of 42.797 seconds and Kristen Vanderveen (USA) rounded out the top three aboard Bull Run’s Testify stopping the timers in 43.875 seconds, with both U.S. riders adding four faults to their jump-off score.

Fans from the across the western region of the Carolina Foothills packed the George H. Morris Arena, creating an electric atmosphere for a class featuring Olympic veterans and many of the sport’s rising stars. With only four horse and rider combinations advancing to the jump-off, Navet was the single rider to jump clear around Alan Wade’s (IRL) impressive first round course and jump-off track.

“I thought it was a very good course. Alan Wade is one of the best course designers in the world in my opinion. We were very, very glad to have him tonight and throughout the week building the courses for us,” said Navet. “It did not walk so difficult, but that is the particularity of Alan [Wade] because there is always less to jump-off than expected. In the jump-off I went early in the order of go, and I knew that the two girls behind me are both very, very fast riders, so I had to take maximum risks.”

Navet has consistently placed well at TIEC over the past two weeks of FEI CSI 3* and 4* competition, with this win being the highlight of their time here in North Carolina. Catypso, a 2007 Hanoverian gelding (Catoki x Calypso II) owned by Signe Ostby, has developed into a remarkable horse under the guidance of Navet. Navet and Catypso have had a whirlwind spring season together, earning top finishes across the country since the start of 2017. The pair accumulated a list of solid performances on the West Coast, before gaining valuable experience in the FEI World Cup™ Finals Omaha 2017 in Omaha, NE in the spring.

Navet spoke about the development of Catypso over the years, saying, “It is a funny story with this horse. He was very weird in the beginning and did not jump so well. We always knew he had a very big, easy scope, and he can jump anything. He never struggles. It has just taken time to really build and teach him. I am so proud of him.”

Navet and his team at Pomponio Ranch visited TIEC last year for the first time, before returning this summer. They made a point to add two weeks of showing at TIEC onto their five-week tour of the East Coast before heading back to California. ”

“We really enjoy these shows and we really enjoy the facility. It is an amazing place. It is a very good place to work with horses because we show grand prix horses as well as develop young horses. We can do everything here and that is fantastic,” he explained.

With the stands packed, TIEC was brimming with excited fans who expressed enthusiasm and support throughout the night. Navet described how the buzz in the air played a part in his win.

“The crowd is amazing. It was the same last week as well. There are so many shows here and people still keep coming and cheering for the riders. It is a great atmosphere and for us riders it is very motivating. There is a big difference in competing with empty stands than when there is a crowd like tonight’s. It is so much fun for us.”

Hunter Holloway, the youngest rider in the class, piloted VDL Bravo S in one of the biggest classes they have competed in together. Holloway detailed her special connection with the 2006 Dutch Warmblood gelding (Ephepe For Ever x Chellano Z) owned by Virginia Bartholomay and Hays Investment Corp., saying, “My horse is amazing. I have such a good partnership with him and I really trust him. This is one of the bigger classes I have ever jumped on him and he was amazing.

“My plan for the jump-off was to go smooth and clean. Following Eric [Navet] is always a challenge. He is truly a beautiful rider and I love watching him ride.”

Having the experience of riding the course once already, Vanderveen expanded on her plan to ride the course differently with Bull Run’s Testify to make it to the jump-off.

“It is always nice to go in and ride the lines because it always walks a little bit different then it rides. I was able to go more forward on my second horse to give him a better chance than I did on my first ride,” she detailed.

Vanderveen knows she can always count on Bull Run’s Testify because of their trusted partnership. The pair has amassed numerous respectable finishes together and Vanderveen was happy with their performance.

“He is like a glove to me. I am so comfortable on him and I always put him in the biggest class when I am feeling a little insecure myself. He is like my teddy bear. He has a special place in my heart because he is a steady eddy. He always goes out there and does his job every time. He is very, very reliable,” Vanderveen added.

Among several other awards, Vanderveen accepted the Leading Lady FEI Rider Award presented by Meg Atkinson of Town & Country Realtors, honoring and recognizing her success and performance in FEI classes throughout the week. Eric Navet’s groom was also awarded the $500 Absorbine FEI Groom’s Award for his exceptional care and management of the evening’s grand prix winner, Catypso. 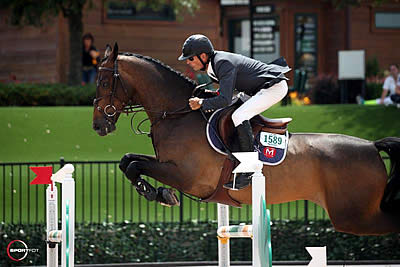 Mill Spring, NC – June 1, 2017 – Eric Navet (FRA) and Catypso made a quick run up the leaderboard in the $35,000 1.50m Tryon Challenge CSI 3* at Tryon International Equestrian Center (TIEC) on the second day of FEI competition during the 2017 Tryon Summer Series. Navet and Catypso clocked their jump-off finish in 38.209 seconds ahead of Hunter Holloway (USA) and VDL Bravo S, who were narrowly edged by Navet and finished in 38.485 seconds. Kristen Vanderveen (USA) and Bull Run’s Testify rounded out the top three place finishers, adding four faults to their jump-off time of 36.926 seconds.

Navet and Catypso have had a whirlwind of a spring season together, earning top finishes across the country since the start of 2017. The pair amassed a list of solid performances on the West Coast, before gaining valuable experience in the FEI World Cup™ Finals Omaha 2017 in Omaha, NE in the spring.

“He had a few good finishes last year, but has stepped into his own. He had a very successful season in Thermal, CA this winter and finished in fifth in the million there,” explained Navet. “We showed in Omaha, NE for the FEI World Cup™ Finals and I thought that it was an incredible performance for lack of experience at that level.”

The pair has only continued forward in good form after competition in the spring, as they collected a grand prix win in their first outing back in Lexington, KY before capturing their first win at TIEC. The pair navigated the track set by Michel Vaillancourt (CAN), which only saw five combinations advance to the jump-off round.

“I didn’t see Hunter’s round so I didn’t know how fast she was, but wanted to go into the ring and do our own thing. I didn’t want to go too fast before the class on Saturday, but I was lucky because it was very tight,” he added.

Catypso, a 2007 Hanoverian gelding (Catoki x Calypso II) owned by Signe Ostby, has been a labor of love for Navet and business partner Karl Cook, as Cook purchased the gelding in December of his five-year-old season. Navet explained, “It has been a process to bring him along to this level. It’s been about four years and he only started jumping the grand prix classes last fall. He needed to adjust to the system, but is flourishing and it’s been a good journey.”

The duo will head back to the West Coast after contesting this week’s CSI 3* and next week’s CSI 4* at the venue. Their East Coast tour has gone exceedingly well and Navet is hopeful for the future with Catypso.

“I’d like to do the grand prix next week as well. We’ll go back to California after that to work with some of the younger horses and competing there through the summer and fall. My goal would be to have both Karl and I qualify for the FEI World Cup™ Finals next year in Paris. That’s my hometown and it would be very special to compete there with Catypso,” concluded Navet. 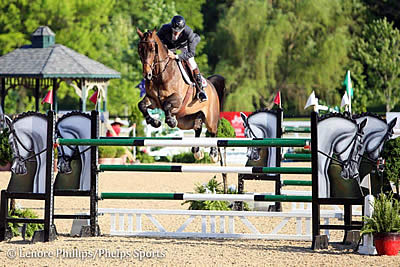 Lexington, KY – May 13, 2017 – The French flag was flying proudly over the Rolex Arena on Saturday night as Eric Navet and Catypso were victorious in the $130,000 CSI3* Grand Prix presented by Hollow Creek Farm. The pair, who has traveled to Kentucky from their home in California, bested a field of 51 athletes to take home the top prize after a double clear effort. Hollow Creek Farm’s own Emanuel Andrade came in a very close second place with Bon Jovi, while Sharn Wordley and Casper rounded out the top three placings.

Navet has been waiting for the perfect course and right venue to let his mount put all the lessons he has learned over the past few years to work. The Rolex Arena provided that perfect platform for the 10-year-old Hanoverian gelding to show his competitiveness at the Grand Prix level. The pair went early in the order of go and posted the first clear round of the night over a course designed by Marina Azevedo.

The French National Champion and Olympic medalist has been working with Catypso since he was acquired by the Cook family as a six-year-old. Even though 2016 was the first year that Navet began regularly competing Catypso in Grand Prix classes in California, the pair qualified to compete in the 2017 World Cup Finals in Omaha, Nebraska with positive results.

The spring Kentucky Horse Shows offered Navet with the perfect venue for his first show back since World Cup Finals. After competing in Kentucky for the first-time last year, the Kentucky Horse Park has become an ideal destination for Navet and his students because of the professional atmosphere and outstanding footing.

The $130,000 Hollow Creek Farm CSI3* Grand Prix was a truly international event, as can be demonstrated by the various countries that occupied the top three placings in the class: Navet of France, Andrade of Venezuela, and Wordley of New Zealand. In all, there were twelve different countries represented by the equestrian athletes.