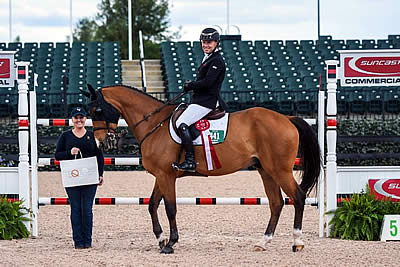 Wordley and Casper, a ten-year-old bay Oldenburg gelding (Contender x Baloubet du Rouet) owned by Sky Group, were selected as Best Presented by the ground jury at TIEC, led by President Michael DeTemple of Brazil. Prepared for the horse inspection by Wordley’s barn manager, Charlie Miller, Casper was impeccably turned out and went on to finish second in the $35,000 FEI 1.50m Suncast® Welcome before ribboning in the $130,000 Asheville Regional Airport Grand Prix CSI 3* on Saturday.

“I was really surprised to win the award, but it’s a great idea,” said Wordley in reaction to the Equis Boutique Best Presented Horse Award. “I’ll be in Tryon for nine weeks this year, so all my horses will be braided, and I may even throw on a tuxedo if it means I can keep winning it.”

“I was planning to purchase a pair of [Kentucky] boots for this season anyway, so [Equis] saved me some money!” he said.

Casper has been the mount of Wordley for only one year, but he has big plans for the gelding that include the FEI World Equestrian Games in 2018. The pair is well on their way after a banner winter that included many top ribbons, highlighted by second place in the $380,000 Douglas Elliman Grand Prix CSI 5* during week nine of the 2016 Winter Equestrian Festival (WEF).

“I brought him along slowly, but he has jumped some very good classes,” said Wordley. “Now I will start to use him more. He’s smart, careful, and has figured out how to jump the big, wide, five-star oxers, so he really believes in himself. He’s the best horse I have ever sat on.”

Equis Boutique will offer the Best Presented Horse Award again at TIEC during Tryon Spring 7 and 8, taking place June 1-5 and 8-12.

Equis Boutique is a shopping experience for the discerning equestrian and offers the most convenient and luxurious choice for top equine brands to dress the horse and rider. Featured brands include Parlanti, Manfredi Equestrian, KASK Helmets, Anna Scarpati, Kingsland Equestrian, Kentucky Horsewear, and Dy’on, as well as a variety of imported specialty bits and Official FEI and Just World International merchandise.

For more information on Equis, LLC boutiques, please visit EquisBoutique.com.  Email info@equisboutique.com for questions on the stores and their products.