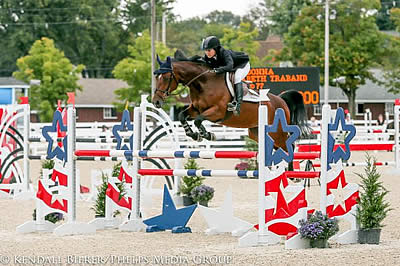 Devon, Pa. – Sept. 17, 2016 – Elizabeth Traband and Melissa Rudershausen wrapped up the Devon Fall Classic on Sunday with victories during the United States Hunter Jumper Association Zone 2 Horse of the Year Jumper Championships. Traband and Rudershausen were among seven athletes to secure a spot in the winner’s circle in their respective divisions.

“This is actually my first show with Ladonna, and she just went in and marched around like a champion,” Traband said. “This is my favorite horse show. Just to be able to come here is great. It is such an incredible facility. There is so much history. It definitely makes this win more special.”

Traband rode Ladonna to victory in the $5,000 Low Junior Jumper Classic, besting the field of four riders who qualified for the speed round. Each competitor laid down a double-clear effort and only four-tenths of a second separated the top two athletes. Traband and her 11-year-old Warmblood triumphed with a time of 33.055 seconds, forcing Ashley Hartman and Clear Lady to settle for second place with a time of 33.490 seconds.

The unique rider shared her background, explaining, “I have a really crazy story. I became a fan of a guy named Tommie Turvey. At the time, I had this rotten pony that liked to buck me off and was horrible in the show ring. I rode him bridle-less everywhere, and one day, Tommie said, ‘Why don’t you come on the road with us?'”

Traband was born without an arm, but never allowed herself to be held back. At age 7, she was given the opportunity to travel all over the country with Turvey, performing in night shows and clinics.

“In 2010, we were performing at the World Equestrian Games,” the Penn State student continued. “Louise Serio was there with the international hunter derby riders. They got together and got me a grant to go to Wellington for two weeks – I was hooked.”

She added, “I hope I am an inspiration. I hope that I continue to push myself, and get outside of my comfort zone. It is amazing what you can achieve and what you can do when you put your nose to the grindstone.”

Lauren Lindner and Nazario 2 led the jump-off of the Low Junior Jumper class and set the initial time to beat, tripping the timers at 35.710 seconds. Her effort earned her the third-place finish, ahead of Chloe White and Miss Understood II, who finished in a time of 36.121 seconds for a fourth-place ribbon.

Rudershausen and Alicante Manciaise won the final class of the day in the $5,000 Low Amateur-Owner Jumper Classic. The duo was first to tackle the Paul Jewell-designed course and laid down a faultless effort to claim their spot in the short course. Three other horse-and-rider combinations followed their lead, narrowing down the chance at the tricolor ribbon to four athletes.

“Going first in the jump-off, my plan was to not go crazy,” Rudershausen explained. “I wanted to be tight and tidy in the turns, save room in the turns and really let it go to the last fence. My plan went really well. When I landed from the last fence, I thought I had a pretty good chance of winning it.”

Rudershausen and her Selle Francais mare sped through the track effortlessly in a time of 33.852 seconds, setting a time to beat that was too difficult for the other contenders to catch.

“There is no feeling in the world like walking under the sign to the Dixon Oval,” Rudershausen said. “It is a special feeling, and one we always try to achieve. I have been showing here every year since the Fall Classic started. It is really nice that it is only one ring, only jumpers. It is just run beautifully. They do a great job, and I love it.”

The duo had one of the two double-clear rounds in the afternoon. Caroline Annarella earned the second-place honors aboard Maxima 103 with an errorless round and time of 36.970 seconds.

Taylor Willever incurred four faults and clocked in a time of 35.883 seconds for third place with Adeline, while Heather Irons and Quiesel 4 settled for fourth place with an unfortunate elimination.

Earlier in the day, Kimberly Nevitt and Pardoned earned the first rosette of the championship day, finishing first in the $1,500 Low Adult Amateur Classic, while Wendy Chapot Nunn and Finella settled for the red ribbon in the class.

The $3,000 High Adult Amateur Jumper Classic had a tough field of 22 competitors vying for the prize money and embroidered cooler. Sheila Ann Sadighi and Ulano bested the field of contenders and came out on top, while Joy Slater and Oilean Uno earned second place.

The ponies took over the Dixon Oval for the $1,500 Pony Jumper Classic, and Luke Sassi stole the show aboard Sky Miles as he sped through the course. Along the victory, Sassi earned the Pony Jumper Style of Riding Award. Catherine Wilson and EZ to Spot came up just short of the title, settling for the class’s red ribbon. 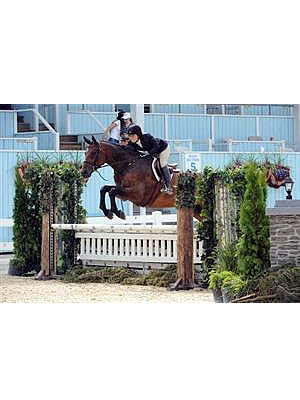 Lexington, Ky. – The United States Equestrian Federation (USEF) is pleased to announce the 2015 winner of the $1,000 Junior Hunter Finals competitor grant, Elizabeth Traband, of Centre Hall, Pa. Traband competed at the US Junior Hunter Championships East Coast in the 3’3″ Junior Hunter division with her own horse, Huh.

The grant is awarded annually to the applicant who constructs the best essay detailing how his/her competitive experience has affected him/her, and what it would mean to be awarded the grant. The winner is selected by USEF staff members, who were impressed with lines from Traband’s essay.

“When I reflect back on my world, I see so many positive effects from my time spent with horses,” Traband wrote. “It’s made me believe in my dreams and embrace the perseverance it takes to make them come true. I have learned responsibility, focus, commitment, and the benefit of hard work, which carries over in everything you do.”

Learn more about the US Junior Hunter National Championship at www.usef.org.