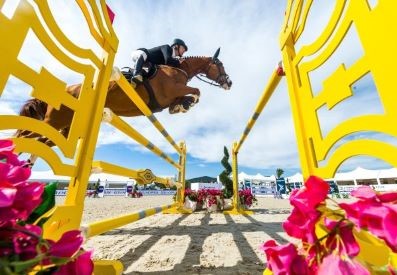 The scenario of the first HUBSIDE JUMPING SPRING TOUR CSI4* Grand Prix of 2021 was ideal. The sun shining again in the ring in Var, forty-one combinations competing in this 1.55m Grand Prix and a final with 10 jump-off riders: the French course designer Cédric Longis was to be commended to have successfully finished up with the 25% of clear rounds expected. Although two lady riders finished on the podium, in the end it was Spain’s Eduardo Alvarez Aznar who was the winner, riding Legend, his ten-year-old gelding.

Eduardo Alvarez Aznar, winner of the CSI4* Grand Prix: “This was Legend’s first 4* Grand Prix, so I couldn’t be more pleased today! He jumped really well in the first round. I knew there were still some very fast combinations after me in the jump-off so I took a lot of risks and they paid off. I’m really delighted and I would like to thank my groom for the great job that he has done.” 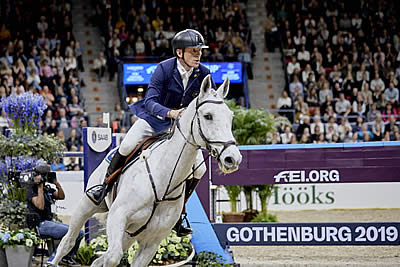 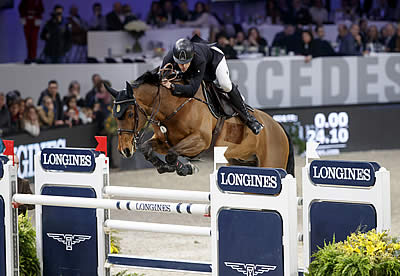 Zurich (SUI), 29 January 2017 – A daring ride gave Spain’s Eduardo Alvarez Aznar victory in the 11th leg of the Longines FEI World Cup™ Jumping 2016/2017 Western European League in Zurich, Switzerland. In a nine-horse jump-off against the clock the 33-year-old rider threw caution to the wind with a thrilling run with Rokfeller de Pleville Bois Margot that stopped the clock in the winning time of 36.20 seconds.

“He’s not a horse I normally ride so quickly, so I took a chance today and I’m so happy because it paid off!” Aznar said after posting his first points on the series table. Runner-up was last man into the ring, Austria’s Max Kuhner with Cornet Kalua, while Colombia’s Carlos Enrique Lopez Lizarazo claimed third spot with the ever-brave Admara.

Swiss course designer, Guido Balsiger, gave the 38 starters plenty to think about in the first round and many struggled to negotiate the left-hand turn to the triple combination at fence 10, often meeting the opening triple bar on a very deep distance, while the penultimate one-strided double also proved influential. Rio Olympic team gold medallist Roger Yves Bost from France took a spectacular fall with Sangria du Coty when the mare attempted to tackle the middle element of the triple combination on a single stride instead of two, but they left the arena unscathed.

Lizarazo set the target at 38.43 seconds when second to go against the clock, and when Germany’s Marco Kutscher played safe with his new ride, Clenur, he didn’t threaten the lead. Fourth to go, however, Alvarez Aznar was on fire, taking every risk to race through the finish and when Britain’s William Whitaker was a little cautious with Utamaro D’Ecaussines, and Belgium’s Nicola Philippaerts lost his chance when H&M Harley vd Bisschop tripped up after the second fence, there were only two left to deny him the win. Last to go Kuhner came closest to the Spanish rider’s time thanks to a courageous gallop to the last, but was almost two seconds adrift when breaking the beam in 38.03.

Alvarez Aznar, son of legendary six-time Olympian Luis Alvarez Cervera, now heads to the second-last leg of the qualifying series in Bordeaux (FRA) next weekend and, when asked if he thinks he can take maximum points again in order to qualify for the Longines Final at the end of March, he replied, “It’s difficult enough to win one without winning two-in-a-row – but we can always try!”

Eduardo Alvarez Aznar ESP (1st): “Winning is always the goal when you go to a show, but the first day here we didn’t start so good, so I thought today I would just try to be clear, and then we win it!”