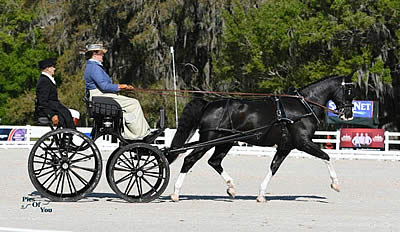 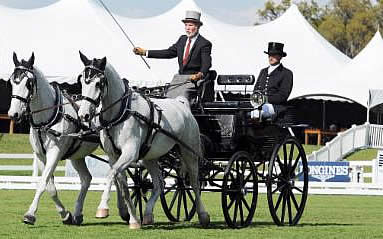 Gladstone, N.J. – June 20, 2017 – The United States Equestrian Team (USET) Foundation is pleased to announce the launch of a transformational fundraising initiative, the Driving Challenge, made possible through the generosity of Misdee and James Miller, Steve Wilson and Laura Lee Brown.

As active drivers and loyal supporters of equestrian sport, these competitors have come together to lead in their support for the US Equestrian High Performance Driving program.  The goal of the initiative is to raise $1,200,000 for the driving discipline, through multi-year gift commitments of $20,000 or more, made by December 31, 2017. These gift commitments will be matched dollar for dollar up to $500,000. Misdee and James Miller, Steve Wilson and Laura Lee Brown invite fellow drivers, owners and enthusiasts to help create a legacy for the United States High Performance Driving program by contributing to the Driving Challenge.

The United States High Performance Driving program is ready to advance to the next level. To achieve this, continued effort needs to be made in identifying and preparing U.S. drivers through the developing program, and to provide international competition opportunities for success at the elite level. Securing the services of world-class coaches, as well providing grants for European competitions are central to achieving success. In order to accomplish this and close the gap between nations currently winning international medals, an investment in the programs and the drivers must be made to establish a pathway to the podium.

The Driving Challenge will create a source of funding that can be drawn upon each year and provide increased support for the high performance programs. It will establish a meaningful base of annual support for all the driving disciplines including singles, pairs, ponies and four-in-hand. The challenge will also create momentum and provide an incentive for others to contribute, knowing their gifts will be matched.

Ensuring U.S. drivers have the opportunity and sufficient financial resources to train and compete in international championships depends on a commitment from all those passionate about the discipline of driving and from those that want to see our U.S. driving teams achieve excellence in international championships. Today we call on you to consider our U.S equestrian team’s path forward. Your leadership and participation in this exciting challenge will define the future of our nation’s equestrian sporting tradition in driving and underscore the importance of this incredible opportunity.

For more information about making a donation to the Driving Challenge, please contact Bonnie B. Jenkins at bjenkins@uset.org or call 908-234-1251.