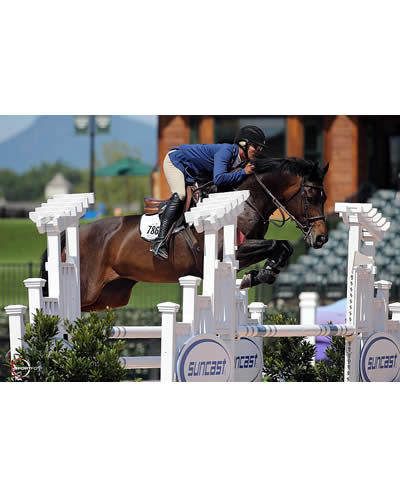 Holly Shepherd dominated the $1,000 Adequan® 1.30m Open Jumper class at TIEC, finishing first aboard the Belle Clara DKS, riding the jump-off round in 36.65 seconds to secure the win. Shepherd then put in another fast clear round riding Copycat, crossing the timers in 67.246 seconds in the first round and jumping clean in 36.66 seconds in the jump-off, just a hundredth of a second slower than her ride aboard Belle Clara DKS.

The class of 25 entries battled for the fastest time around J. P. Godard designed course, which entailed several quick rollback turns, creating faults in several trips. Belle Clara DKS handled the tight course with ease, suggesting good things to come for the pair who has started their week at TIEC in strong fashion.

Jordan Coyne, winner of the Tryon Spring 5 $25,000 Under 25 Grand Prix, rode Christoph Schroeder’s Catori to third place, completing their first round in 67.975 seconds and finishing the jump-off in 39.812 seconds.

David Blake and Pine Hollow Farm’s Zelaleen topped the first class of the $1,000 Animo 1.20 Open Jumper at TIEC, besting a class of 22 entries. The duo finished the first round on course in 61.457 seconds and completed the jump-off in 40.718 seconds to seal the win.

“Zelaleen is owned by the Dvorkins and is ridden by their daughter, Carly, who typically competes the horse. We decided to give it a run before she arrives this weekend,” said Blake. “She’ll be competing him in the Low Junior classes this weekend and I just wanted to basically give him a good round before she comes to compete.”

TIEC will serve as the summer base for Blake and Pine Hollow Farm team, as they will continue to compete throughout the remainder of the spring and summer seasons at the venue. This week is their first week of competition at TIEC and Blake was pleased with the course design he saw today.

“It was a lovely course and the ring is really nice to ride in. There’s plenty of space and you know it’s not too big or too small for what we need,” commented Blake. “This facility is just state of the art; we were here last fall and it was lovely and now it’s just 200% more.”

Blake had several rides throughout the first day of competition with mounts in both the 1.30m and 1.40m classes today and is looking forward to the larger classes to come later in the week.

“Basically today was about getting on and helping them get used to a new place. We’re hoping to do a few in the big class tomorrow and then a few on Saturday night in the Grand Prix as well and a couple in the Under 25 Grand Prix on Sunday,” he stated. “It’s a busy enough week for us for sure. It’s good to be busy and that’s why we enjoy it here.”

For more information on TIEC and to learn more about the June 6th schedule, please visit www.tryon.com. Please “Like” the TIEC Facebook page at www.facebook.com/tryonresort to be eligible for various contests and promotions. 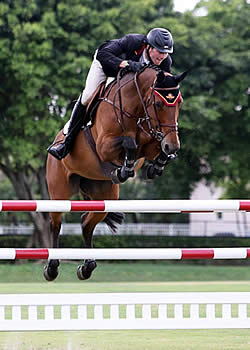 David Blake and Lisalba rode to the Wellington Turf Tour 1.30m-1.35m victory at IPC for Week 9 of the series.

Wellington, FL – March 5, 2014 – Ireland’s David Blake and Lisalba rode to a blazing time of 26.307 seconds in the second 1.30m-1.35m Jumper class at the International Polo Club Palm Beach (IPC) to snatch up the win. Not only did he secure the first place, but he also guided his other mount Aischa to the second place finish. Linda Sheridan and Invitational rode to the first place finish in the first 1.30m-1.35m class, riding to the time of 28.509 seconds.

Darrin Dilin set an early lead this morning at the IPC, riding to the top finishes with three mounts. He left nothing to chance as he guided Tennyson, owned by Susan Grange, to the jump off time of 29.043 seconds. Their time held strong as consecutive competitors attempted to catch it without avail. It wasn’t until the end of the day that defeat seemed a possibility.

Ramiro Quintana was the first to surpass Dilin in the jump off. He shaved the seconds with tight turns and an open stride to slide into the lead in 28.785 seconds. Quintana wore a target on his back as Ireland’s David Blake rode Aischa onto the field. Blake knew that he had ground to cover in order to take over Jeffery Welles for the Leading Rider Bonus, sponsored by the International Polo Club Palm Beach. Sitting in second with nearly 6,500 points separating the competitors, Blake threw caution to the wind.

He rode Aischa through the timers in a speedy 26.669 seconds, and then returned on his 1.30m ringer, Lisalba. Although he only had himself to beat, he took on the challenge. Blake rode Lisalba to a clear time of 26.307 seconds for the win.

“Lisalba is leading the 1.30m series at the Winter Equestrian Festival,” Blake said. “When I saw that the Wellington Turf Tour also offered the 1.30m-1.35m classes, I saw an opportunity to show her here. I am hoping we can show her here on Wednesdays until the end of the series.”

Blake continued, “She is older, so she is quite experienced. I have had her for a year and a half, and she is very competitive. We leave her at this level because she is good at it. She knows when it is the jump off. If you show her the turns, she will always make them. She is naturally a quick horse. She is very straightforward, all you have to go in and show her the numbers.

Blake also took the second place in the first 1.30m-1.35m class with Lisalba. His time of 29.019 seconds did not hold against Linda Sheridan and the 18-year-old Invitational. Sheridan is no stranger to the winner’s circle at the Wellington Turf Tour, having won the 1.30m-1.35m Jumper class at Deeridge Farms during Week VII with the same mount.

Sheridan made a beautiful turn from the first to second obstacles of the short course, and continued her winning ways during the in-and-out when she made a smart angle into the combination, leaving a stride out and emerging a half of a second faster than Blake and Lisalba to finish in 28.509 seconds.

“He was amazing!” Sheridan exclaimed. “Honestly, I think the biggest thing with this horse was doing a nice turn from the first to second jump in the jump off. Doing the short turn to a bigger oxer wasn’t the plan since I am normally very conservative with him, but he was on his favorite lead, the left, and he felt so balanced; he just soared. I really came in on an angle in the in-and-out and he was very clever about that; he left a stride out.”

At only 15.1 hands, Invitational is very short, but his stride, speed and scope proved that he is able to compete with the world’s best. Sheridan has been riding the gelding for 10 years, and she knows him like the back of her hand.

“It is so nice to be able to come out here and do this for fun,” Sheridan stated. “Out here you don’t feel all of the pressure. I like this location, and everything was good. For now, I am going to keep him at the 1.35m height, and then after going home in the spring we may do some small grand prix. The 1.40m competition here is very heavy, and he has been jumping fabulous, I don’t want to change that. I am so pleased with how he is jumping, that right now I want to keep him comfortable at this level.”

Kevin Babington and Borindy would capture the third place just behind Blake. They rode to the time of 30.301 seconds without fault. Jennifer Goddard and Forme Dubra rode to the fourth place finish, while Molly Ashe Cawley and Coq A Doodle finished in fifth. Peter Leone and My Pleasure rounded out the top six with their clean effort in 32.763 seconds.

Today marked the fourth of five YJC Young Jumper Qualifying opportunities. Over 40 competitors rode the track at IPC with their young mounts. Babington returned to IPC to take the victory in the 7 & 8 Year Old YJC Qualifying Class with Dublin 4, while Brooke Cudmore rode Cassin to the 5 & 6 Year Old YJC Qualifier win.

The course opened at 8 a.m. and remained open until 4:30 p.m., allowing competitors ample time to come at their convenience to ride and enjoy the ambiance of the International Polo Club Palm Beach. The $175,000 1.40m Invitational Grand Prix event will return to IPC Friday for the ninth week of competition. Next week the Wellington Turf Tour will continue at the spectacular Valiente Farms. This is the first time the venue has opened its gates for a show jumping event, and the Wellington Turf Tour will make history. The 11-week series will culminate with the $24,750 Wellington Turf Tour Invitational Grand Prix Finale on Saturday, March 22, 2014 at Deeridge Farms.

Meadowbrook Horse Transport will provide transportation to and from the horse show and other locations throughout Wellington for both the Wednesday and Friday events. The transportation is a nominal fee of $50 per horse, and will be calculated into the final show fees. To make a reservation for one of the three pickup times, 8 a.m., 11 a.m. and 2 p.m., please call Peter Tufano of Meadowbrook Horse Transport at (954) 415-7217, or call Nona Garson at (908) 500-0996.

For more information, call (908) 500-0996 or download information at www.theridgefarm.com.

Show Net is onsite for all Ridge at Wellington Turf Tour events, capturing footage and providing live results for each class. For full results and videos, please visit: www.shownet.biz.