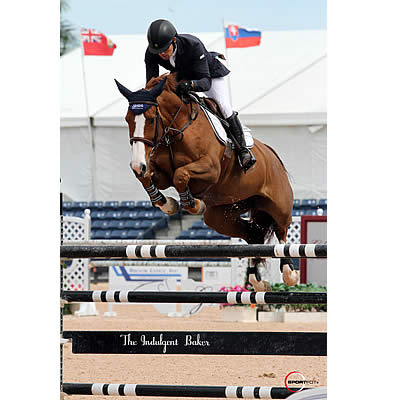 Tomorrow night’s exciting line-up of events at the Adequan Global Dressage Festival at The Stadium includes the $10,000 Head-to-Head Competition over the high jump “Puissance” wall at 6 pm, the FEI Grand Prix Freestyle presented by Horseware Ireland under the lights at 7:30 pm, and The Yale Spizzwinks (?) A Capella singing performances. General admission and parking are free, and there will be fantastic raffle prizes handed out to general admission seat holders. It will be a night of power and grace for equestrian sport that you won’t want to miss!

The 2013 FTI Consulting Winter Equestrian Festival features 12 weeks of competition running from January 9 – March 31, 2013, and will be awarding almost $7 million in prize money throughout the circuit.

Olaf Petersen, Jr. of Germany set the course in the International Arena for Thursday’s Challenge Cup class with 64 entries, 13 clear rounds to advance to the jump-off, and five double clear efforts over the short course. Conor Swail and Martha Louise, a nine-year-old Swedish Warmblood mare by Maloubet de Pleville 1039 x Wolfgang, had the leading time in 42.53 seconds.

Swail got Martha Louise last year and had a great season with many top placings, including wins in the Gijon and Dublin 5* shows in Europe. The mare is just starting up with her season this year and has not shown a lot yet, but proved to be back in form with a great win on Thursday.

“She kind of excelled herself today; she was just fantastic,” Swail smiled after the class. “She is a real good winner. She is a great horse to have on the truck and she is only nine years old. I have to say, she was very good today. I wasn’t really expecting her to be so good because she hasn’t been doing a lot and I thought she would be a bit rusty, but she was fantastic in the jump-off.”

Swail went second in the jump-off and had to beat a fast pace set down by Charlie Jacobs and Flaming Star. He explained his strategy.

“I was quite lucky because Charlie was first and I was second,” Swail stated. “I watched him closely because he is a fast rider and also whenever the ring is dragged, there are no other tracks, only his, so when I was riding around I could see his tracks. He was tight. He was very good one to two, he was tight to three. He was also very tight to the white oxer, but then coming down to the double he went ten (strides) and I went eight. I think that is where I got him. I took the risk of having the vertical down. I was quite narrow going into the double and I think that is where it paid off.”

With a smaller class and some of the top horses taking a break after last week’s CSI 5* competition, Swail thought the class was a perfect way for Martha Louise to start the season.

“She is a very kind horse,” he said of the mare. “She has a big, slow canter, but she also has a lot of quality and good scope. She is really nice. She could be inexperienced at this level. Sometimes she can worry a bit off the jump and sometimes I can press too hard and don’t totally trust that she will do it, so that we have to smooth out a little, but apart from that she does a lot of great things.”

Along with his winning prize money, Swail was also presented with a special rider’s bonus for the SSG “Go Clean for the Green” promotion. A $3,000 bonus is offered each week if the winning rider of the Challenge Cup class is wearing the SSG ‘Digital’ Riding Gloves in all rounds of competition with the SSG logo clearly visible.

Havens Schatt and Smiles had plenty to grin about after earning championship honors in the Lucas Equine Equipment Performance Hunter 3’3″ division during week ten of the FTI Consulting Winter Equestrian Festival (FTI WEF). Schatt and Smiles, a ten-year-old Dutch Warmblood gelding owned by Bruce Duchossois, bested the division with consistent performances over two days of competition. Day one, the pair won the under saddle and placed first and third over fences, followed by second and fourth place finishes on day two. Hayley Barnhill and Missy Luczak-Smith’s Surf’s Up were reserve champions after two blue ribbon finishes over fences on day two.

Schatt was eager to give Smiles a change of pace after he returned from some time away from the show ring. “He hasn’t shown for two weeks, so it was especially fun to show in a different ring,” Schatt admitted. “He’s never been in Ring 7 before, so he really had his ears up and we had a lot of fun with it.”

Schatt enjoyed the opportunity to ride one of her more mature mounts in a new environment. “Ring 7 can be hard because of the jumper horses being nearby. Today’s classes followed the Pre-Greens, so the courses were simple, but built very nicely. I deal with a lot of younger horses and so it was nice to be on an older horse that you know will be good in a new venue,” Schatt explained.

While Schatt is no stranger to the winner’s circle with her talented string of hunter mounts, she especially appreciates her close bond with Smiles. “I know him really well and I know every time I get on him exactly what I have, which isn’t always the case with the young ones. He’s very consistent, which is really nice,” Schatt described.

Schatt and Smiles are currently in first place in the FTI WEF circuit championship standings for the division. Schatt credits their success to Smiles’ striking presentation and remarkable natural talent. “He’s bigger and he’s all chestnut, so he’s very elegant and stands out a little bit. He always jumps the same with great follow-through behind. He jumps as well behind as he does in front. He can jump high with so much ease, has beautiful movement across the ground, and you don’t have to pull on his mouth. He gets in one rhythm where everything just happens,” Schatt concluded.

Schatt will continue to ride Smiles for the duration of the FTI WEF in addition to owner Duchossois, who will return to the Amateur-Owner 3’3″ divisions with Smiles during week eleven of the FTI WEF. Week ten, sponsored by Horseware Ireland, will continue Friday when the Camping World Adult Hunter 51 & Over Section A names its champion in the Gene Mische Grand Hunter Arena. The $33,000 G&C Farm 1.45m will be featured in the International Arena during the day and the $35,000 G&C Farm Puissance will be held at The Stadium at PBIEC in the evening. For full results, please visit www.showgroundslive.com.

Wellington, FL – January 16, 2013 – The second week of competition at the 2013 FTI Consulting Winter Equestrian Festival (FTI WEF) kicked off on Wednesday, January 16, with a win for Conor Swail (IRL) and Carlotta Singular in the $8,000 G&C Farm 1.45m Jumpers at the Palm Beach International Equestrian Center.

Luc Musette of Belgium is the course designer in the International Arena for week two jumper competition. In the first class of the week, 24 entries showed in the $8,000 G&C Farm 1.45m speed class. Only six entries were able to clear the course without fault, and the fastest clear round belonged to Ireland’s Conor Swail and his mount Carlotta Singular, owned by Susan Grange. The pair was first to go in the class and set an unbeatable pace at 61.578 seconds.

END_OF_DOCUMENT_TOKEN_TO_BE_REPLACED

Wellington, FL (April 6, 2012) – Olympic rider Peter Leone, who took home a Silver team medal at the 1996 Olympic Games aboard Crown Royal Legato as part of the United States Equestrian Team, was back in the winner’s circle during the seventh week of the 2012 Winter Equestrian Festival when he won a World Development Group 1.35m Jumper class. Sponsored by World Development Group, a premier developer committed to building the equestrian lifestyle in Wellington and around the world, Leone rode Annie 66, owned by Ri-Arm Farm, to the win.