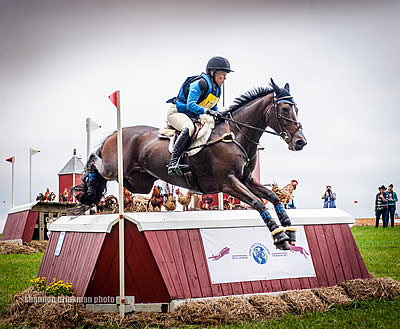 A fast cross-country round gave Maryland native Rutledge (Frederick, Md.) and her own Covert Rights the top position in the CCI3* division. The 11-year-old Thoroughbred cross gelding remains on his dressage score (39.8) after a fault-free performance.

“He gets every gold star I could possibly give him. He saved my butt when I got us into trouble, and he was foot-perfect at 90% of the course,” Rutledge commented, noting that she had experience on her side with four-star partner Covert Rights. “Luckily, I know that he’s got the experience behind him. He’s already done two four-stars. He reads the fences. He’s so much more mature now, and he’s so much more experienced now, where I could just gallop down and see the stride from six strides away and attack the fences. That was probably one of the most fun cross-countries that I’ve had in a long time.”

Will Coleman (Charlottesville, Va.) and The Conair Syndicate’s Tight Lines leapt from 13th to third after an incredible cross-country effort. The 10-year-old Thoroughbred gelding continues on a score of 46.3.

“He never lacks run or gallop. He’s just an animal out there. It was a hard course, but I thought it was a proper test. I think it’s a testament for the cross-country riding in this country,” Coleman commented. “It was a difficult three-star, and I’ve ridden a lot of three-stars around the world, and I would put Fair Hill at the very top, in terms of difficulty.”

Smith (Murrietta, Calif.) and Sunsprite Warmbloods’ Sunsprite Syrius were the first combination to come home clear within the time on Saturday’s cross-country. The nine-year-old Trakehner gelding made quick work of di Grazia’s course to remain on his dressage score (40.9) going into Sunday’s show jumping finale.

“I didn’t know what to expect. He hasn’t been in an environment like this before. He was super. He didn’t question one thing. He was spot on. You bring them here to the two-star at Fair Hill and know if you definitely have a three-star horse and beyond, and I definitely feel that,” Smith said of the young horse’s promise.

“My first one, ‘Hugo,’ was amazing. He and I have a wonderful relationship. I felt super-confident with him. It was nice to go out and do all that with him, then be able to make tighter lines on Louis. They were both great and super-fit. I’m happy with them,” Dorr smiled.

Again in the CCI2*, Coleman climbed the leaderboard, this time with Off The Record, an eight-year-old Irish Sport Horse gelding owned by the Off The Record Syndicate. The duo completed the course penalty-free to move into third place on a score of 49.8.

“I was proud of him. He’s an eight-year-old horse, and he was second in [The Pedigree Bromont CCI2*] this year, and the last four to five times out he’s been in the top five. So he’s been consistent. That’s what we are going for, for all the horses this year, trying to build consistent performances throughout all three phases,” Coleman remarked. “I think it was a proper test with a pretty good group of horses here. [The Dutta Corp./Fair Hill International Three-Day Event] gets billed as a two-and-a-half-star, and I think people have a lot of respect for it and come ready.”

Colleen Rutledge is a woman on a mission combining a four star eventing career with extraordinary duties as a mother. Clark Montgomery celebrates a three star win and Bobby Costello returns to co-host with Chris. It’s all right here.