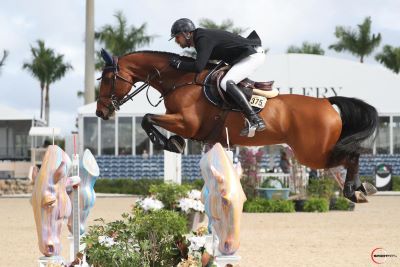 Wellington, FL – Nov. 21, 2021 – The ESP Pre-Charity CSI3* reached its pinnacle on Sunday as 30 riders competed for the top spot in the $137,000 Noltex®Vet Grand Prix CSI3*. Course designer Héctor Loyola (PUR) tested the entries with a technical pattern of jumps, of which only two mastered to advance to the jump-off. No strangers to the winner’s circle and recent competitors at the 2020 Tokyo Olympics, Nayel Nassar (EGY) and Evergate Stables, LLC’s Igor Van De Wittemoere finished in spectacular form as the only double-clear duo to top the class.

Competition immediately followed in the International Arena with the $25,000 Elite Horse Transport Grand Prix. The National Grand Prix attracted a field of 20 competitors, with just four pairs placing double-clear rounds. The final pair in the jump-off, Sharn Wordley (NZL) and Valentine Car, owned by Fernando Cardenas, stopped the clock at 43.99 seconds to secure their names at the top of the leaderboard.

Competing over 1.40m fences in the $2,500 High Junior/Amateur-Owner Jumper Classic, presented by Noltrex®Vet, only three partnerships advanced to the jump-off, and just a single entry was able to finish the class without any faults at all. Leading the way was Coco Fath of Fairfield, CT and Hillside Farm LLC’s Exokit Sitte thanks to a double-clear winning time of 45.05 seconds. Due to their victory on Sunday and a third-place finish in an earlier divisional class, Fath and Exotik Sitte were also awarded the overall championship honors. 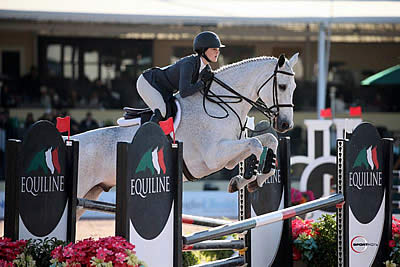 Wellington, FL – March 23, 2018 – Coco Fath of Fairfield, CT topped the field aboard Class Action, an entry of Hillside Farm LLC, in the 11th Annual George H. Morris Excellence in Equitation Championship. The class was held in the International Arena at Palm Beach International Equestrian Center under the lights on March 23 at the 2018 Winter Equestrian Festival (WEF) in Wellington, FL. Alexandra Worthington captured second, Ava Stearns secured third, and Daisy Farish finished up on the leaderboard in fourth place.

Seventeen-year-old Fath, who was fourth in the class last year, was leading both rounds going into round three with an 88.5 and a 90.5, for a grand total of 179 points. Worthington, Stearns, and Farish joined the young Connecticut native in the ring for final testing, of which final scores were not announced.

Although Worthington entered the test in fourth place aboard her mount, Outshine, with a 79.5 and 89 in the first two rounds, the pair took full advantage of the opportunity to highlight their finesse and finished with reserve honors. Following a masterful counter-canter to the first fence, the pair tackled the hand gallop, and impeccably executed the halt and back before returning to the line-up. Stearns finished in third with a total of 172.75 points, and Farish tested second to last to finish in fourth with 169.5. Fath was the last to face the challenges set in round three and secured her position at the top of the class.

The $20,000 Spy Coast Farm Developing Jumper 7 Year Old Classic featured some of the top young jumpers in the nation. Out of an opening field of 23 entries, six were clear to advance to the jump-off over a course designed by Steve Stephens of Palmetto, FL, who was a co-course designer at the 2008 Beijing Olympic Games.

The fastest of three double clear rounds was Gerlos (KWPN gelding by Der Senaat 111 out of Honolulu 111 by Cicero Z van Paemel), ridden by Andrew Ramsay (USA) for Shalanno Farms LLC. They finished in a time of 39.267 seconds for the win. James Chawke (IRL) and Stonepine Stables’ Grasshopper (KWPN gelding by Phin Phin out of Believe In Me, bred by A. Vos Ekkelkamp) were second in 40.691 seconds. Third place went to Chic Chic (Westphalian stallion by Comme Il Faut out of Contendra by Contendro I, bred by Norbert Borgmann), ridden by Stephen Moore (IRL) for Vlock Show Stables LLC in 42.351 seconds.

In the $15,000 Spy Coast Farm Developing Jumper 6 Year Old Classic, it was a familiar face in the winner’s circle. Daniel Coyle (IRL) and Khaleesi (KWPN mare by Gaillard de la Pomme out of Wendy by Sir Corland, bred by W.A.M. Tilbeke), owned by Ariel Grange & Lothlorien, took the win and repeated a victory after winning the 5 Year Old classic in 2017.

In this year’s classic, Coyle and Khaleesi were one of 11 double clears out of 12 in the jump-off and 24 in the original starting order. They stopped the timers in 34.821 seconds for the win.

Tiffany Foster (CAN) and Calina (Danish Warmblood mare by Ci Ci Senjor ASK out of Camelicius by Cornet Obolensky, bred by Lauritzen), owned by One Oak Equestrian, were second in 35.757 seconds. Third place went to Jimmy Torano (USA) riding Elizabeth Eaton’s Cowboy (German Sport Horse gelding by Cardento out of Urnike by Heartbreaker, bred by Redfield Farm), and they finished in 37.658 seconds.

The winner of the $10,000 Gut Einhaus Developing Jumper 5 Year Old Classic was Coppertone, ridden by Lexy Reed (USA) for Littlewood LLC and Ginny Burton. The Hanoverian gelding by Viscount out of Alisa by Acord II (bred by Gunter Wellmann) was the only double clear in the class and recorded a jump-off time of 40.518 seconds.

Five other combinations made it through to the jump-off, and second place went to Emmy Tromp (USA) riding Yolanda Knowlton’s Ibaltic BH (KWPN gelding by Baltic VDL out of Vavanta v/d Renvillehoeve by Burggraaf, bred by F. Buma). They had one time fault in 50.022 seconds. Adam Cramer (USA) and Equi-Sport LLC’s Iris E.S. (KWPN mare by Val de Loir-Imoo out of Bellissima ES by R. Johnson, bred by Equi-Sport LLC) were third with four faults in 45.977 seconds.

Only two riders managed to skim under the 40-second mark in the jump-off for the $35,000 Douglas Elliman Real Estate 1.45m Jumper class, with Ireland’s Richie Moloney bettering his 38 rivals. Eleven combinations made it through to the jump-off over Germany’s Olaf Petersen Jr.-designed track, with nine of those managing to pull off a second clear round on the manicured grass of the derby field at Equestrian Village (home to the Adequan® Global Dressage Festival).

This win for the Irish rider, in week 11 of the 12-week 2018 WEF, was the first international victory for Moloney and Rocksy Music, Equinimity LLC’s 10-year-old gelding by ARS Vivendi. 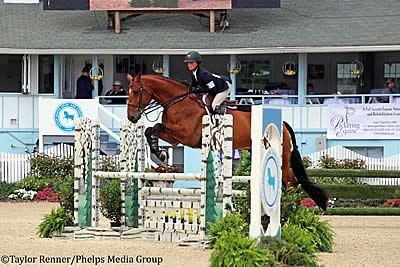 Devon, Pa. – May 26, 2017 – As Taylor St. Jacques trotted into the Dixon Oval once more atop Heritage Farm’s Charisma on Friday afternoon, she had a lot riding on her shoulders as she has been the leading force dominating the equitation divisions thus far. The 18-year-old superstar from Glen Allen, Virginia walked away on Thursday with three blue ribbons – one from each section of the WIHS Equitation Classic Jumper Phase, the Platinum Performance/USEF Show Jumping Talent Search and the Pessoa/US Hunter Seat Medal. On Friday, she capped off an incredible start to the 2017 Devon Horse Show by winning the R. W. “Ronnie” Mutch Equitation Championship.

St. Jacques’ additional victory in her section of the ASPCA Maclay on Friday morning was icing on the cake as it meant she and her mount were not only four-for-four and gaining more valuable points towards indoor finals, but they were also in tip-top shape entering into the afternoon’s highly-anticipated class.

Winners from each section of the four equitation divisions were invited back to participate in the prestigious R. W. “Ronnie” Mutch Equitation Championship to vie for the coveted trophy and tricolor ribbon.

Top names joined St. Jacques in the ring to give it a shot over the Allen Rheinheimer-designed track, including Samantha Cohen, Haley Redifer, McKayla Langmeier, Annabel Revers and Cooper Dean.

It was a year of firsts for St. Jacques and the Heritage Farm team. While Heritage Farm owner and head trainer Andre Dignelli is notorious for producing winners in all three rings at the most prestigious horse shows and finals throughout the country, Dignelli had yet to coach a rider at Devon to win every equitation class in addition to the R. W. “Ronnie” Mutch Equitation Championship.

Both Dignelli, who owns Charisma, and St. Jacques were quick to praise the 10-year-old bay Warmblood gelding’s performance. Charisma has been a versatile horse, campaigning not only in the equitation but also in international hunter derbies. St. Jacques paired up with him just last year during regionals and advanced to finals in the fall.

A magical ending concluded St. Jacques’ final time competing in the equitation at Devon Junior Weekend. In terms of the future, St. Jacques has her sights set on participating in the U25 jumper division and hopefully competing at the Olympic Games one day.

Finishing behind St. Jacques to secure reserve champion honors was McKayla Langmeier and Calberon B, owned by Linda Langmeier.

Later in the evening, 16-year-old Coco Fath of Fairfield, Connecticut captured the win in the second round of the Junior Jumper championship aboard Hillside Farm LLC’s Huckleberry.

Twenty-one junior riders returned after Thursday’s Junior Jumper Speed Stake to compete once again under the lights in the Dixon Oval.

Only seven were able to clear Kelvin Bywater’s first round track to advance to the jump-off. Taylor St. Jacques, who has had a stand-out Junior Weekend at Devon thus far, and her own Qantar Des Etisses were first to return for the jump-off, setting the standard to beat at 4 faults in a time of 34.914 seconds, which would garner them third place as the fastest of the 4-faulters in the final standings.

Jorja Rose Jones and Diane Master’s Light Show produced a double-clear effort a few rounds later, stopping the clock in 42.081 seconds. Yet their time would earn them second place honors in the end as Fath and the 10-year-old Dutch Warmblood gelding jumped clear and bested their time by four seconds in 38.906 seconds for the win.

Wellington, FL – February 10, 2013 – Week five of the 2013 FTI Consulting Winter Equestrian Festival (FTI WEF), sponsored by Adequan, concluded on Sunday afternoon with a win for Olympic gold medalist Ben Maher of Great Britain aboard his young mount Quiet Easy 4 in the $25,000 Suncast 1.50m Championship Jumper Classic. Maher has been a dominant force in Wellington over the last two weeks with back to back grand prix wins, including last night’s $82,000 Adequan CSI 2* Grand Prix. He can now add a 1.50m victory to his tally for the winter.