END_OF_DOCUMENT_TOKEN_TO_BE_REPLACED

Ocala, FL (January 22, 2010) – World-renowned equestrian photographer Gabriele Boiselle has captured the bond between Combined Driver Chester Weber and his animals, and the tender moment is being preserved in one of Boiselle’s 2010 calendars. The photo captures Chester Weber holding his wife’s Miniature Schnauzer, Steffi, standing with his equine partner Jamaica. The expressive photo appears in Boiselle’s 2010 Combined Driving (or Fahren, German for ‘four-in-hand’) calendar.

Boiselle has spent almost three decades traveling and photographing horses around the globe, sharing her images with her fans through calendars, books, DVDs, an online photo archive and live photoseminars. Her company, Edition Boiselle, is based in Speyer, Germany, near Frankfurt.

For 2010, Boiselle has created 24 different wall calendars, including the calendar featuring Weber and other combined drivers. “For many years I have personally been so fascinated by carriage driving and in particular by the four-in-hands that I actually traveled to the USA to take photographs at the special Live Oak competition,” Boiselle said, adding that each of the breathtaking pictures tells an individual story. Read more> http://www.horsesinthesouth.com/article/article_detail.aspx?id=9969

Ocala, FL (November 16, 2009) – Jamaica, Chester Weber’s combined driving horse, captured the nation’s attention last year when he won the most prestigious horse title in the country and became the 2008 USEF Farnam Platform Horse of the Year. As the Horse of the Year, Jamaica served as an ambassador for the USEF, making public appearances, promoting rescue organizations and horse adoption and taking part in a variety of charities.

While Jamaica’s story captivated the nation, his role as USEF ambassador also earned him a fan following. “Jamaica’s story really meant a lot to a lot of people, and whether we were at shows or at home, fans would bring him presents and carrots and place them in front of his stall and ask to pose for photos with him,” Weber said. “His journey has been pretty unbelievable and I am certainly glad to have been part of it.” Read more> http://www.horsesinthesouth.com/article/article_detail.aspx?id=8874

Ocala, FL (October 26, 2009) – Jamaica, the 2008 USEF Horse of the Year and member of Chester Weber’s seven-time National Four-In-Hand Combined Driving team, has taken his role as an equine ambassador seriously throughout the past year. Jamaica recently received his most colorful request ever, when the ReRun Thoroughbred charity asked Jamaica and his teammate Rolex to help raise money for charity by painting masterpieces known as “Moneighs.”

Never ones to say neigh, Jamaica and Rolex painted their works of art for ReRun’s Moneigh collection, which will be auctioned off on eBay to raise money for ReRun. The name Moneigh is derived from the name of the famous artist and the sound a horse makes.

ReRun’s Mary Simons visited Live Oak Stud in Ocala to assist Jamaica and Rolex with their paintings and was thrilled with the beautiful bay Dutch Warmbloods. “They were stunning animals and my favorites so far,” Simons said. “I had heard that sometimes Jamaica wasn’t so friendly, but he was very warm, kind and professional. He and Rolex both did their paintings with red and white paint and signed them with a black hoof print.” Read more> http://www.horsesinthesouth.com/article/article_detail.aspx?id=8642 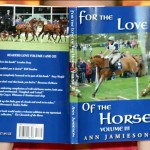