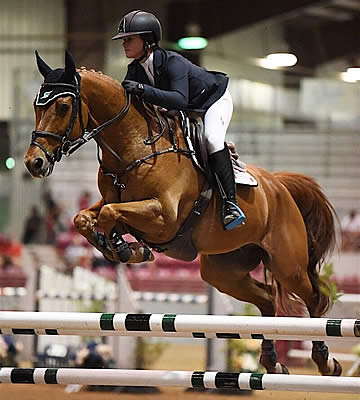 Thirty-four entries competed in the $35,000 EMO Agency Grand Prix in the indoor stadium at the Jacksonville Equestrian Center. Cassandra Kahle of Califon, New Jersey in the irons of Redfield Farms’ Epeios rode away with the blue ribbon after a thrilling grand prix.

Just two rides later, Cassandra Kahl and Redfield Farm’s Wallstreet made it a jump off with their clear first round of 81.484 seconds.

Flower Mound, Texas’ Tracey Fenney in the irons of MTM Farm’s Igor Van De Heibos made it a trio in the jump off with their clear first round in a time of 84.253 seconds.

Haley Gassel of Lenoir City, Tennessee aboard Westwind Equine Training Center’s Quite Dark 2 was the next horse and rider team to advance to the jump off round with their clear first round in a time of 85.001.

Rowan Willis of Williston, Florida and Lucinda Huddy & Rowan Willis’ Diablo also added themselves to the jump off roster after posting a clear first round in 81.630 seconds.

Kahle returned to the course, this time in the irons of Redfield Farm’s Pyrenes De Louzes. The pair advanced to the jump off after a clear first round in a time of 81.106.

Fenney and MTM Apple, owned by MTM Farm, joined the jump off roster after going clear in their first round in a time of 82.51 seconds.

Kahle returned to the ring, this time in the irons of Redfield Farm’s Epeios. The pair went clear in a time of 78.120 seconds. “I didn’t see where others struggled in that, but for me, everything was working well with the horses and the course,” she said.

Moggre added another mount to the jump off roster, Major Wager, LLC’s MTM Los Angeles, with a clear round in a time of 82.589 seconds.

Kyle Dewar and his own Clever Van De Helle were the final pair added to the jump off roster, after posting a clear first round in a time of 83.878 seconds.

Rheinheimer set the jump off round with a time allowed of 49 seconds.

First to go, Moggre and MTM Los Angeles went clear and set the new time to beat at 44.446 seconds.

Kahle and Wallstreet followed. “I’ve been riding Wallstreet for some time now. He was my first Grand Prix horse and took me around some bigger classes that I’ve never done before. He has taught me so much. I haven’t shown him for a while and this was our first show back together. I have a real soft spot for him,” commented Kahle. The pair turned in a four fault jump round in a time of 45.819 seconds.

Fenney and Igo Van De Heibos followed Kahle and Wallstreet. In a time of 55.937 seconds with four jump faults and seven time faults, the pair finished in eleventh place.

Gassel and Quite Dark 2 followed in the order and with their time of 48.787 second with four jump faults, finished in ninth place overall.

Willis and Diablo were up next and turned in a clear round with a time of 46.665 seconds, placing fourth overall.

Kahle and Pyrenes De Louzes followed and their fault free round in 47.809 seconds finished them in fifth overall. “’Pyro’ is my old guy. He’s sixteen this year and I rode him for the first time at this horse show three years ago. I have gained a lot of experience on this horse. He’s strong, so I have a hard time going fast with him, but tonight we were really good,” she said. The pair ended up fifth overall.

Fenney and MTM Apple followed in the order and earned four jump faults in a time of 45.466 seconds, which earned them sixth overall.

Williams and Vedor earned four jump faults and five time faults for their time of 49.005 seconds which earned them a tenth place ribbon.

Shepherd and Manchester had twelve jump faults and seventeen time faults for their 65.618 second jump off round which placed them twelfth overall.

Kahle and Epeios were up next. The pair turned in a fault free round in a time of 44.432 seconds and set the new time to beat. “The toughest part of the jump off was the skinny to the oxer and you needed to be pretty straight. Actually, the two to the five was pretty tough too. The five turned out to be forward and Epeios has so much heart and is so strong, it worked. The jump off overall was twisty and turny and you still had to ride it neat and fast,” commented Kahle. “Indoor riding is a bit tough because you don’t have a lot of time to get going; you just need to get in there and just go,” she said.

Moggre and MTM Los Angeles followed Kahle and went clear in a time of 45.299 seconds, not fast enough to take the lead.

Dewar and Clever Van De Helle were the last to go. Four jump faults in a time of 47.926 seconds saw them finish in eighth place overall, leaving Kahle and Epeios victorious and Moggre with second and third with MTM Vivre Le Reve and MTM Los Angeles, respectively.

“I think Brian [Moggre] is incredible,” said Kahle. “He can take a fast horse and make him faster,” she said. “You see, I’m not a very fast rider. But my advantage was that my horse is very fast and he’s really fast across the ground. I did as close to the same track that Brian did and this time; my horse was just a bit faster. He’s a really cool horse. I’ve been riding him for a bit over a year now. He had shown up to 1.35 m when I got him and last summer we started doing the 1.45 m and some 1.50 m. He has so much blood and fight in him; I’m really lucky to have him,” she said. 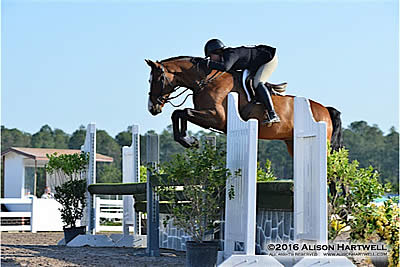