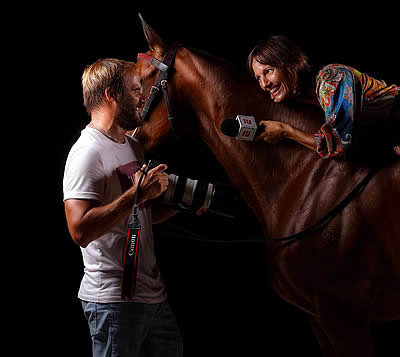 Ramon Casares and Martina Monteverde of the ESPN Polo Show.

London, United Kingdom (August 7, 2019) – As the hoofbeats drum and mallet swings to strike its white, round target, so too does the shutter hum and flash bulbs crackle to freeze a moment in time. For Ramon Casares, capturing the raw beauty, power, and detail of the equine form has been a defining theme in his career. His work includes portrait, sport, and private commissions set in a chiaroscuro style, an artistic trademark featuring high contrast and dramatic illumination. The Casares brand and its imagery have captured the imagination of numerous national and international art and sport audiences, including most recently ESPN Polo and the 2019 Cartier Queen’s Cup Polo Final held at the prestigious Guards Polo Club in Windsor, Berkshire, United Kingdom.

The mid-June Cartier Queen’s Cup did indeed feature Her Royal Highness Queen Elizabeth II, decked out in a hot pink suit and hat, presenting Nicolas Pieres, Number 3 from the winning team Scone, with the day’s accolades, alongside a number of celebrities. But in addition to the Cup’s gameplay and social attractions, a more subtle form of entertainment and ambiance could be found in the VIP banquet area, where Casares’ portraits of famous equines stood vigil over partygoers.

“It was an absolute honor to have my artwork so displayed at the Queen’s Cup,” said Casares, who was present at the event to oversee the installation and presentation of his work. “My pieces have been showcased at the British Polo Days in the past, which is a highly regarded and star-studded charity exhibition, and I was thrilled to also be invited to the Queen’s Cup. My goal was to accurately depict the equine athlete as a source of grace, passion, strength, and beauty.”

With an equine portfolio that includes everything from rescued ponies to legendary polo champions and their clones, Casares’ breathtaking images also stole the attention of ESPN Polo Show International host Martina Monteverde. She and Casares spent an evening at one of Wellington, Florida’s many polo farms for a behind the scenes look at how he captures his iconic images. With a stage as dramatic as his artwork, Casares’ portraits include spectacular reflective lighting and elite equipment to capture every detail of his subject.

ESPN’s shoot with Casares is the most recent in a long line of rescued wildlife and sport horse portraits that have delineated Casares as an artist and conservationist. Building on influences from his background as a native of Argentina and career as an exotic animal caregiver at the country’s largest zoo, Casares expanded his photographic talents to include all species of creature, from human and equine to possum and crocodile. He has photographed animals from nearly every phylum, class, and order in the animal kingdom. With Casares Fine Art Photography appearing across the globe and garnering international acclaim, his images have captured the imagination of audiences at major media outlets and international art shows.

But despite his passion for the horses and traditional commissioned work, Casares’ portrait style images of nature’s rarest and most common species are the artist’s true accomplishment and calling card along with his trademark style: devoid of background distractions and illuminated to detail each whisker, feather, or scale. Casares captures an essence with each image that underscores his own passion and vision as a photographer and conservationist. As a former keeper for the Buenos Aires Zoo, Casares was witness to the beauty, ferocity, and fragility of the animal kingdom firsthand. During the evolution of his photographic career, he began to visit wildlife rescues to document the plight of their patients. Realizing his images could generate support and awareness for those injured and recuperating commonplace species, as well as those who are in danger of extinction, Casares embarked on a mission to unite his talent for photography with his passion for conservation. BROKEN was the result.

BROKEN is the final product of 4 years worth of photography, the resilience of each animal, and the selfless efforts of their rescuers. In the oversized fine art book, the saga of each animal is told beside their stunning and emotionally evocative images with the goal of bringing awareness to their struggle and rehabilitation. An ever-growing endeavor, Casares intends to expand the Broken: Rescued Wildlife Fine Art Project to multiple countries and continents to maximize awareness and resources for endangered wildlife.