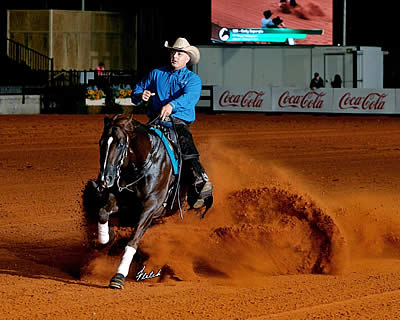 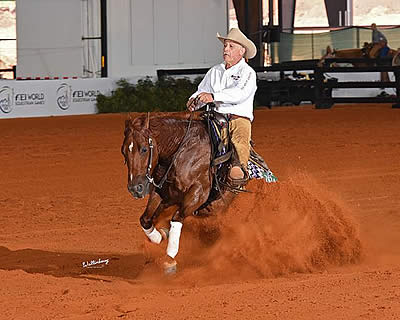 Mill Spring, NC – May 21, 2018 – Tryon International Equestrian Center (TIEC) hosted the Carolina Classic at TIEC as the first reining competition on property since the inception of the venue, showcasing more than 600 entries to preview the venue and enjoy the expanded schedule.

Competition was held in the newly-constructed Indoor Arena onsite, where the sport will once again be hosted during world-class competition in September for the FEI World Equestrian Games™ Tryon 2018 (WEG). Continuing a twenty-seven-year legacy of the Carolina Classic Derby, the 28th installment, with an expanded schedule under its new name, included two-part USEF Selection Trials, $15,000 FEI CRI 3* competition, the Carolina Classic Open and Non-Pro Derbies, the Atlantic Breeder’s Incentive Derby, and a double slate of National Reining Horse Association ancillary classes, American Quarter Horse Association classes and USA Reining classes.

The Carolina Classic Open Derby on Saturday saw Peter DeFreitas (USA) guide Double Run Farm’s Sweet Daisy Surprise to victory in Level 4 competition on a score of 218, while Level 3 top horse-and-rider pair was Jeremy Gates (USA) and Ingrid Rund’s Watchitgalsgottagun on a score of 217. The pair also rode to the top of the $12,000 Atlantic Breeder’s Incentive Derby, finishing with top honors on the single purse system list. The Carolina Classic Open Derby Level 2 and Level 1 podiums featured an All-American, three-way tie for first on a score of 216.5: Dany Pelletier aboard Parker Minchin’s Conquered This Town, Tricia Tillman aboard Kimberly Tillman’s Boomin in Lace, and Nathan Morton aboard Misty Yelton’s ARC Shesa Walla.

Yelton, whose horse ended up in third place on the single purse system after a win in the Level 2 Open Derby, enjoyed a win for the second year in a row. “It’s surreal. For one horse to have won it last year, and turn around and have a different horse win it this year, is unbelievable. With the same rider, same owner and two different horses doesn’t happen very often. Two years before, we actually tied to win, and then lost it in a runoff, so technically we could have won three years in a row! So it’s been unreal.”

As a local based in Rutherfordton, NC, Yelton explained that hosting western disciplines at TIEC is significant for the region. She explained, “The area has always had a rich tradition in the Hunter/Jumper disciplines, you know, when George Morris trained the Olympic Show Jumping team here, but we have a lot of Western competitors here, too. With Reining being in a Western saddle and Western tack, that reaches to that demographic of people that might not have ever thought about coming over here,” she said of the packed crowds who attended the inaugural event at TIEC.

“People I’ve talked to at times feel like they don’t know enough about English disciplines or Jumping to come out, but they know more about Reining even if they’ve never competed, because most of those horses are Quarter Horses,” Yelton continued. “Quarter Horses are actually the most popular breed in the United States and the world, so that’s what most of the people around here have.”

Yelton observed that since Western disciplines encompass the majority of the general public’s experiences with horses and most non-competitive, recreational riders prefer Western tack, bringing a recognizable sport to TIEC further strengthens its already significant appeal to equestrians and non-equestrians alike.

“The majority of recreational and hobby riding is done in a Western saddle, so Reining is a great introduction to riding. The majority of those horses that are taking you down the trails are Quarter Horses, and that’s the breed that excels in the Reining world. To bring that sport to this area, I think opens you up to a whole new market of horse people.”

The Carolina Classic was first hosted in Raleigh, North Carolina before moving to Williamston, North Carolina for the majority of its history thus far, recounted Yelton. “For Mike [Hancock] to trust this venue to do it [the Carolina Classic] speaks volumes of his faith in the team’s ability to host it here. The competitors can’t wait to come back next year, and people are already asking about reservations for RV spots for next year! I think it’s been a great success.”

Yelton concluded, “The facility is amazing, the footing was awesome – some of the best in the world – the stalls are incredible, the staff, from the show office to stabling to the grounds crew and security have all been over-the-top accommodating for anything we needed or wanted. Even having a veterinary service on grounds, actually standing there watching the competition and cheering you on is pretty incredible, too.”

The FEI CRI 3* Reining Test Event and USEF Selection Trial saw a tie for top honors shared between Dan Huss aboard Frederick Christen’s Ms Dreamy and Jordan Larson aboard ARC Gunnabeabigstar, owned by HDC Quarter Horses, both finishing with a composite score of 450 points. Bronze went to Cade McCutcheon after he guided McQuay Stables’ Custom Made Gun to a two-round score of 446 points and triumphed as the youngest FEI competitor at the Carolina Classic at TIEC. 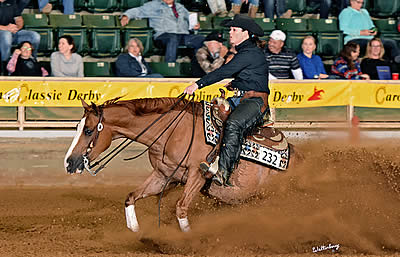 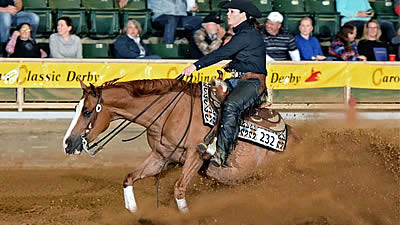 TRYON, N.C. – February 1, 2018 – Tryon International Equestrian Center (TIEC) announced today that it will host the 28th annual Carolina Classic Derby at its facility on May 8-13, 2018, the first reining event to be held at the 1,600-acre venue.

Mike Hancock, longtime producer of the event, was glad to see this next step for the Carolina Classic. “After 27 years of producing the Carolina Classic Derby, I am proud to see the event move to another level. The facility at Tryon is spectacular! I know the management team will do an outstanding job producing an event that will be exciting and fun-filled for the exhibitors. It is good to see that our history of Southern hospitality will continue!”

Mark Bellissimo, Co-Founder and CEO of Tryon International Equestrian Center, said, “We are incredibly honored to be the new host of the Carolina Classic and expand our footprint to welcome Western disciplines to Tryon International Equestrian Center. With the addition of our covered arena, we look forward to delivering world-class reining competitions at our venue year-round and are very proud to launch our reining program with such a distinguished show and its impressive team.”