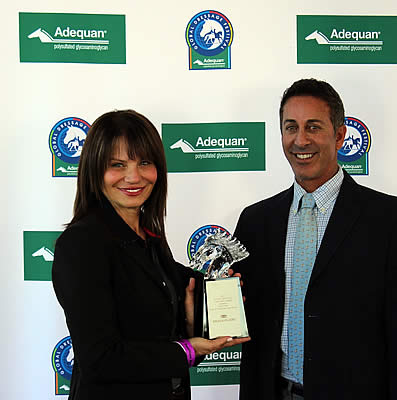 Wellington, FL (January 22, 2016) – The first week of the 2016 Adequan Global Dressage Festival (AGDF) in Wellington, Florida played host to scores of professional and amateur dressage riders. This energetic and competitive environment was the perfect place for the inaugural presentation of Carol Cohen’s Global Dressage Visionary Award, which was presented to Team USA chef d’equipe, Robert Dover. Carol Cohen, a Wellington, Florida dressage visionary and founding member of the Adequan Global Dressage Festival, was pleased to name Dover as the first recipient of the prestigious award. Cohen will be presenting the Global Dressage Visionary Award during all CDI weeks of the world-renowned dressage festival throughout the rest of the season.

Dover, a six-time Olympic athlete and the current chef d’equipe of the U.S. Dressage Team, has been involved with the Adequan Global Dressage Festival since its inception. “I thought there was an opportunity that was being missed here,” Dover said, recalling his thoughts from before this international show circuit existed. He realized that an unused polo field in the South Florida horse community would be a perfect venue to renew interest in the sport of dressage in the community – where the hunter, jumper, and polo disciples had already caught the world’s attention.

Dover’s road to the head of the American dressage team all began when his former Olympic coach, Colonel Bengt Ljungquist, urged Dover to carry forward what he had been taught. “I had no idea what he meant by that,” Dover said. “I was 18 years old. It wasn’t until much later in my life that I reflected back on it and realized that he was saying I was going to have some role in the sport bigger than I even knew.” Now, Dover is coaching and training hopefuls for Team USA, which is planning to go for the gold at the 2016 Olympic Games in Rio de Janeiro, Brazil.

Cohen, an FEI-level dressage competitor herself and a sponsor of the 2016 Adequan Global Dressage Festival, created the Global Visionary Dressage Award to recognize individuals who have been instrumental in the growth and promotion of classical dressage in America. Cohen honored Dover with an engraved glass Global Visionary Dressage Award trophy. Rewarding dressage icons like Dover is important to Cohen, who says that dressage has made an incredible impression on her life. “This sport – I feel it,” she said. “It’s my passion. I care about it very much.”

Cohen has also been instrumental in creating the first Adequan Global Dressage Festival Leadline class, which will begin on January 29 as a kick-off to the FEI Grand Prix Freestyle competition. She is sponsoring the class in an effort to bring new dressage riders into the discipline. “Our community needs to foster the future riders of the sport, and my hope is that the leadline class becomes a recognized division in the future,” she said.

Not only is Cohen a passionate advocate for the sport of dressage, she is also active in the local Wellington, Florida community as a licensed Real Estate Agent under the umbrella of Engel & Völkers real estate brokers. Like the Adequan Global Dressage Festival, Engel & Völkers’ presence is substantial in the Wellington area as well as throughout the world.

Wellington, FL – January 10, 2012 – The first segment of Mason Phelps Radio was a huge success last week, and as listeners gear up for the second installment on Thursday, January 19, the guests are lining up to join Phelps in studio. Karen O’Connor, Boyd Martin, Carol Cohen, and Bernie Traurig will join Phelps and co-host Steve Williams this week at 5:00 p.m. EST on W4CY.com. Phelps and his guests will be discussing the most important issues regarding the equestrian community, from exciting upcoming events, to the challenges and obstacles the sport faces.

Olympian Karen O’Connor will be a guest this week as she prepares for Friday night’s PRO DerbyCross event at the Winter Equestrian Festival. Teams are composed of three event riders, a show jumper, and a polo player. The teams compete in a relay event over a course of cross-country and stadium jumping obstacles in the International Arena. Also participating in PRO DerbyCross and joining Phelps will be eventing rider Boyd Martin.