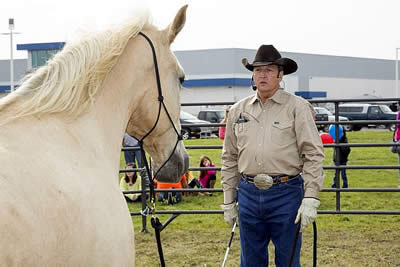 Ray working a horse at the Blain’s Farm and Fleet Grand Opening.

Morton, IL – October 14, 2014 – When Cathy Roe took her elderly mother to watch Ray Ainsworth, she planned to only stay for one day of the multi-day clinic, but by the end of the day at the Blain’s Farm and Fleet Grand Opening, Roe knew she would be coming back for more.

“I’ve seen horse trainers before and whatever they want to call themselves – horse teachers, horse whisperers. Most of them don’t overly impress me,” Roe said. “I watch what they do. That’s fine and neat, but maybe it’s not something I would do or doesn’t apply to my situation or me. When I first watched Ray, he impressed me. When I first got there the first day I was hooked. I came back Friday and Saturday.”

Roe is not alone in being impressed by Ainsworth. Known as THE MAN HORSES TALK TO, Ainsworth teaches horses in a way that makes him one of the world’s most unique horsemen. He has started as many as 10,000 horses, and he now travels the country giving clinics and helping others to start their animals or address behavioral concerns.

It was at one of Ainsworth’s most recent clinic stops that Roe came to see him and ended up bringing with her a Quarter Horse/Paint named K.C.

“K.C. didn’t buck, kick or bite – nothing drastic – but if you wanted to go riding, you had to stick with someone else,” Roe explained. “You couldn’t ride off by yourself. If you did, he would freeze. As long as it could see the other horses, you could ride it, but the minute those horses were gone, it would go into a panic. He was very attached. It was my daughter’s horse basically, but she couldn’t ride it because it would freeze. I was sharing this with all with Ray, and he said to bring him over. So I brought him and another horse over to the grand opening at Blain’s Farm and Fleet.”

Roe continued, “I told him in all honesty that we were going to sell this horse because my daughter wouldn’t mess with it because the horse scared her. Now, my daughter is interested in the horse again because she can’t believe the difference.”

Out of the saddle, Roe’s daughter had a difficult time leading K.C. across grass, as he would always pull his head down to the grass and refuse to move. After working with Ainsworth, the problem is a thing of the past, and the ground work that Roe picked up from Ainsworth is something that she and her daughter plan to continue to utilize with their horses.

“It would always jerk its head down and eat the grass. It was always a major issue. You take a 1,000 pound animal and a 100 pound little girl. It turns its head, and it’s going to pull her,” Roe said. “[After working with Ray] the horse never tried once to eat grass. It paid attention to her. I was really amazed. Some people said the horses there had been worked with before. I said, ‘You can tell the story however you want, but this was my horse. I know for a fact Ray never saw that horse before a day in his life.’

“I went out and bought eight of the videos, and I did all the things that he told me to do with this horse and my daughter also has been working with the horse,” Roe continued. “Ray really impressed me, and I have nothing bad to say about that man, absolutely nothing.”

Following his time in Illinois, Ainsworth headed to Alamo, Tennessee for the 16th Annual Buck Creek St. Jude Trail Ride. The trail ride raises funds each year for the St. Jude Children’s Hospital, and this year, for a minimum $25 donation to the hospital, riders could have Ainsworth work with their horse(s).

It was at the trail ride that Ainsworth met Tina Evan’s mount, Dakota.

“Last year, Dakota got tied up to a hitching post, and I was bringing my saddle out and dropped it out my arms. That spooked him, and unfortunately, the hitching post was not secure,” Evans said, sharing the story behind the 10-year-old horses concerns. “He took off down the road with a piece of hitching post attached to the rope. He beat the heck out of his legs. So he’s always been very head shy when it comes to being tied up and having anything like the saddle brought out.”

After their time with Ainsworth, Evans immediately saw a difference in Dakota’s behavior and plans to continue to practice what she learned from Ainsworth.

“When I saddled up to ride him on Saturday after Ray had worked with him, I brought that saddle right around the side of the trailer which normally he would have spooked, but he just looked at me as if to say, ‘Oh, okay, no problem,'” Evans said.

“Ray’s a very personable man. I like his gentle approach. He’s very informative and explained every step of what he was doing, which I think is great. When you’re training people you need to explain why you’re doing it, not just do it,” Evans concluded.

To come see Ainsworth first hand, find out where he will be visiting throughout the year here. Ainsworth’s next clinic will be held at Blain’s Farm and Fleet Grand Opening in Dubuque, Iowa Oct. 23-25. 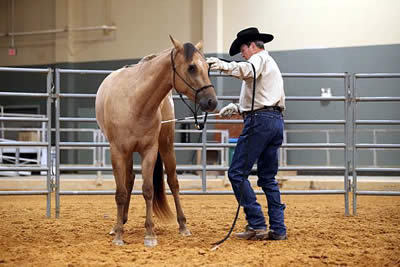 Ray Ainsworth is working as many horses as possible to raise money for St. Jude Children’s Research Hospital.

Alamo, TN – September 27, 2014 – Acclaimed horseman Ray Ainsworth spends countless weekends working and teaching horses, but this weekend there is something extra special about the work Ainsworth will be doing. For every horse that Ainsworth works with now through Sunday, Sept. 28, a $25 donation will be made to the St. Jude Children’s Research Hospital.

Making that possible is the Buck Creek St. Jude Trail Ride in Alamo, Tennessee. Over the past 15 years, the charity trail ride has raised more than $347,000 for St. Jude, and when Ainsworth was approached about the opportunity to get involved he jumped at the chance.

“I was at the Loretta Lynn’s Trail Ride, and there were people there that I helped with their horses,” Ainsworth explained. “They said something about the St. Jude’s Trail Ride so we got in contact with Kathy [Moore] right away, and she was really excited about it.”

Ainsworth continued, “We’re going to be there for three days, and I’m going to work as many horses as I can before I pass out!”

Ainsworth’s goal is to make the world a better place for horses and their humans through communication. At a young age, he learned the language of horses and developed resistance-free techniques that work to teach young horses and help horses with behavioral issues. Ainsworth teaches horses of all breeds and disciplines and travels the country sharing his knowledge at informative and entertaining events and clinics.

For each horse that Ainsworth works for attendees of the Buck Creek St. Jude Trail Ride, running now through Sunday, he is asking that a $25 donation be given to St. Jude.

Additionally, Ainsworth’s work with one horse in particular will hopefully result in much more than a $25 donation.

Moore continued, “We’ve got several others coming too but this particular one, we really want him to work with her because she is a donation, and we want her to bring lots of good money for St. Jude. She’s a good-looking horse.”

A percentage of all Ainsworth’s product sales during the weekend, including DVDs, t-shirts, sweatshirts, saddle pads, etc., will also be donated to St. Jude.

To find out more about Ray Ainsworth and how he may be able to help you, visit: www.rayainsworth.com.