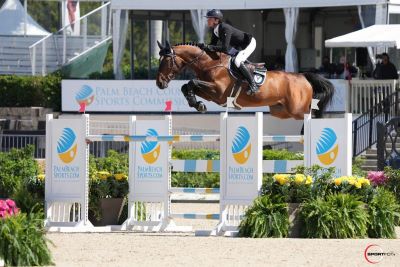 Wellington, FL – March 27, 2022 – The final day of competition at the penultimate week of the 2022 Winter Equestrian Festival (WEF) boasted a day of elite competition as the best in the world geared up for the highlight event, the $216,000 Palm Beach County Sports Commission Grand Prix CSI4*. In a nail-biting jump-off, Darragh Kenny (IRL) took the final international win of the week with Volnay Du Boisdeville.

Forty-four qualified combinations elected to contest Olaf Petersen Jr.’s (GER) challenging grand prix track, but representatives from most of the 16 nations struggled to find a successful path around every obstacle. At the event’s halfway mark, only three athletes consisting of Darragh Kenny (IRL), Petronella Andersson (SWE), and Zoe Conter (BEL) had procured an elusive jump-off spot. Petersen included a triple bar, triple combination, and two liverpool elements to test the riders. What he crafted in degree of difficulty, however, Petersen compensated for in time as he allowed a healthy time allowed of 91 seconds to navigate the course.

As the class wound down, the second half of the entries rose to the occasion and an additional six contenders emerged fault-free for a nine-horse jump-off lineup. Sweden’s Petronella Andersson was the first to take on the short course and put the pressure on as she once again cleared the timers fault-free, which would hold up for fourth place. Kenny was second into the arena and, as he shaved a second off of Andersson’s time, once again took the leading spot with a time of 39.43 seconds. The remainder of the field gave it their all, but the class concluded with his performance still in the lead.

The last of the podium honors went to the final jump-off contenders, Daniel Bluman (ISR) and Ubiluc. Having seen the entirety of the jump-off class play out, Bluman piloted the Over the Top Stables’ 10-year-old Mecklenburg gelding (Ubiko x Lucian) across the track in top form and took over the third-place position after landing double clear in 40.43 seconds.

The Large Pony Hunter division kicked off competition in Ring 12 on Pony Island with 18 young riders taking to the division’s final three over-fences classes. Brianne Beerbaum took the champion title of the division with consistent top performances aboard Heritage Farm, Inc.’s Rashinga. The pair rode to a first-place ribbon in three out of the four over fences classes and secured the fifth-place ribbon in the division’s under-saddle class for a total of 31 points.