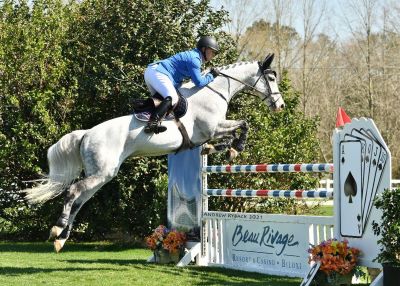 Light Speed Equestrian’s Denison Park Combat and Brian Murphy of Berryville, Virginia had quite a Week III at the Gulf Coast Winter Classic and the exclamation point of the week was when they took home the win in the $25,000 Beau Rivage Lucky 777s Grand Prix!

Twenty-one horse and rider teams tackled the course designed by Jack Robson of Coronado, California on the world-class grass grand prix field and only six would return for the jump off round and the time allowed was set at 50 seconds.

“It was a great week for all of us from my barn,” commented Murphy. “We had four of the six horses to come back for the jump off round.”

When asked about the first round challenges, Murphy commented, “I thought it was a fair track because he [Robson] had too many clear in the Welcome so he had to make it a bit more difficult.

“The first round had the nicest line but you had to be careful. It was a five stride to the Fabbri jump but since it was only a 10’ rail, it was difficult and didn’t take much to bring it down,” said Murphy.

Murphy was the first to go in the jump off order in the irons of Light Speed Equestrian’s Hyperios HS. While their time of 39.880 seconds was well within the time allowed, a heartbreak rail at the last jump saw them with four faults. This was only the second Grand Prix for Murphy and Hyperios HS. Week II saw the pair second in the Week II $25,000 Purina Animal Nutrition Grand Prix, presented by Fazzio’s Home and Farm Center. “Hyperios really loves this field. I bought him as a six-year-old from my student Will Coleman and he was really an event horse before I got him. He’s now nine and although he had a late start as a show jumper, he’s doing great. I overthought that last jump in the jump off round and it cost me a rail which was totally my fault,” said Murphy.

Elizabeth Schumann of Ocala, Florida and Light Speed Equestrian’s Princeton were next in the order of go, but four jump faults in a time of 40.225 seconds, had them in second behind Murphy and Hyperios HS. “I’ve been coaching Lizzie [Schumann] for three years,” said Murphy. “She is an event rider and did her first Grand Prix here last year,” he said. “Princeton is the highest caliber of an event horse, but Lizzie has turned him into a show jumper,” he said.

Bree Garey of Houston, Texas and her own Carvelo Z followed in the jump off round, but a disobedience at the third fence and four time faults saw them finish in sixth overall in a time of 53.122 seconds.

Murphy returned to the jump off round, this time in the irons of Denison Park Combat. The pair turned in a fault-free round in a time of 36.820 seconds, setting the new time to beat and taking the lead.

“My plan was to do seven strides to the oxer, which was a double combination, but I chickened out and did it in eight,” Murphy said. “Robson used the whole field for the jump off round and you needed to run for the last jump and not make too many decisions. This time I didn’t overthink it,” he added.

Julie Cleveland Beam of Argyle, Texas and Anastasia Stewart’s Lancelot followed Murphy in the jump off order. The pair turned in a fault-free jump off round, but their time of 37.779 would not catch Murphy and Denison Park Combat.

Another student of Murphy’s, Collin Reynolds of Oxford, Pennsylvania and Chicco W, were the next team to return for the jump off round. Their fault-free round in a time of 43.083 seconds would see them finish in third overall, leaving Murphy and Denison Park Combat as victors and Beam and Lancelot in second. Reynolds has been training with Murphy for three years and actually bought Chicco W from him.

Murphy went on to win the fourth place ribbon with Hyperios HS and Schumann and Princeton placed fifth.

Holly Shepherd of Grand Bay, Alabama and Loretta Patterson’s CHS Krooze were the fastest four fault round and took seventh place with their time of 76.368 seconds.

Shannon Hicks of Lake St. Louis, Missouri and Helen Gilbert’s Emir D also earned four jump faults in their first round and their time of 77.315 seconds saw them finish in eighth overall. Hicks also picked up the tenth place ribbon with Helen Gilbert’s Clearwater 5 for their four fault first round in a time of 79.975 seconds.

Kaprio, owned by Highridge Farm, LLC and ridden by Danielle Grice of Mount Pleasant, Tennessee, also had four jump faults and their first round time of 78.160 seconds awarded them the ninth place ribbon.

“We’re taking a week off and then coming back again,” said Murphy. “I’m heading to Red Hills to coach event riders and then we’ll stop at our winter base in Ocala for a little bit,” he added. “We plan on coming back in a week.” 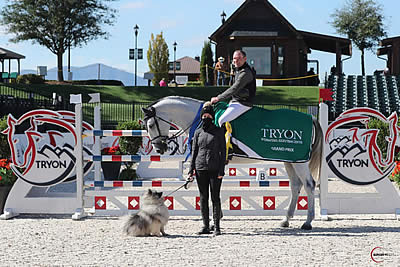