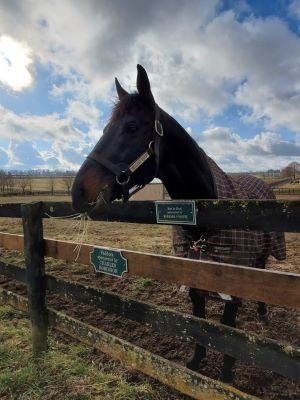 A Florida-bred son of Concerto out of Hurry Home Hillary, Bellamy Road, now 19, retired from racing in 2007 following an illustrious career.

Owned by the late George Steinbrenner’s Kinsman Stable and trained by Nick Zito, Bellamy Road broke his maiden in his first start at Delaware Park in 2004. He earned his first stakes next time out, capturing the GR3 Miller Genuine Draft Cradle Stakes at River Downs.

In 2005, he roared back as a 3-year-old setting a stakes record in the GR1 Wood Memorial, a race he won by a record 17 ½ lengths. The victory made him the odds-on favorite for that year’s Kentucky Derby, where he finished 7th behind winner Giacomo.

His last start was the 2005 Travers at Saratoga, where he finished second to Flower Alley. Plagued by injuries, Bellamy Road retired that year with four wins from seven starts and earnings of $811,400.

Since 2016 Bellamy Road has stood at Dutchess Views Farm in Pine Plains, N.Y. He had previously stood at Kentucky’s WinStar Farm and Hurricane Hall.

“Bellamy Road has always had a special place in my heart,” said Kinsman President Jessica Steinbrenner, daughter of George. “His Wood Memorial is the most exciting race that I have ever been to. I remember going back to the hotel afterward and being escorted through the kitchen because of all the people gathered outside. To this day, I still watch his Wood Memorial on YouTube, and to hear the announcer say ‘a dazzling performance by a dazzling 3-year-old’ brings me to tears every time.

“Bellamy is a rock star,” Steinbrenner continued. “He deserves a retirement where his fans can visit and reminisce. It’s exciting to think he will be amongst the other great retired racehorses residing at Old Friends.”

“We were privileged that Kinsman, WinStar, and the other syndicate members sent Bellamy to us, and have allowed us to stand him in New York for so long,” said Dutchess Views Farm’s Michael Lischin, on behalf of the Syndicate Manager, Irish Hill & Dutchess Views Stallions LLC. “He is sound and could continue as a stallion but the consensus was that, at his age, it would be in his best interest to retire him to a magnificent facility like Old Friends while he is still healthy and happy. We thank the Syndicate and Old Friends for doing what was right for Bellamy Road.”

“We want to thank Jessica Steinbrenner for trusting us to care for her great horse,” said Old Friends’ Blowen. “I know she went out of her way to make sure he’d get to us. Thanks also to Elliot Walden at WinStar who expedited everything, and to everyone at Dutchess Views for taking such great care of him.”