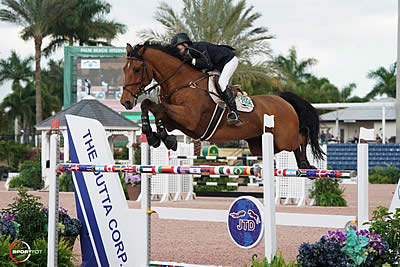 Wellington, FL – February 24, 2019 – In a field of 45 competitors, Laura Chapot (USA) and Mary Chapot’s Chandon Blue sped to the win in the $50,000 Grand Prix CSI 2*, presented by The Dutta Corp. in association with Guido Klatte. Chapot and Chandon Blue were one of eight clear in the first round and fourth to return in the jump-off over a course designed by Andy Christiansen Jr.

First to return in the jump-off were Bretton Chad (CAN) and The Pugilist, who put down a deceptively fast clear round in 38.72 seconds that would hold up for second place. After a fall and a scratch from the next two competitors, Peter Wylde (USA) and Canamera 2, owned by Kathleen Kamine, entered the ring and finished in 39.99 seconds for fifth place.

Chapot and Chandon Blue went next and through a combination of speed and tight turns, they brought the leading time down to 37.85 seconds for the win.

In the $72,000 CaptiveOne Advisors 1.50m Classic CSI 5*, there were 45 entries competing over a course designed by Anthony D’Ambrosio. Four were able to go clear in the first 20 trips in the class, and they went on to go for speed in the jump-off.

Ward went first in the jump-off on HH Gigi’s Girl, owned by Double H Farm. A rail and a time of 39.41 seconds left them in fourth place.

Lorenzo de Luca (ITA), riding Stephex Stables’ Evita Van’t Zoggehof, were next in and they were very quick and clear in 37.81 seconds, which would slot into second place. Third place went to Carlos Hank Guerreiro (MEX) on H5 Jemousin, owned by H5 Stables, who was clear in 41.07 seconds.

Last proved to the best when Ward returned with Tradition de la Roque, a 12-year-old Selle Français mare by Kannan x Oberon du Moulin. They sped through the short course in 37.55 seconds, just taking the win by less than three-tenths of a second.

The final day of competition during Week 7 of the 2019 Winter Equestrian Festival highlighted several FEI events in the International Arena as well as national hunter, jumper, and equitation competition throughout the Palm Beach International Equestrian Center. Both sections A and B of the ASPCA Maclay took to Ring 9 with upwards of 30 entries each. Section A awarded the first place to Abigail Lefkowitz and Top Saint Aubin, while Section B’s victory went to Ava Ellis aboard Campreoll.

In each section, the top 12 riders were invited to return for a test on the flat in which they were asked to remove their stirrups from the saddle before displaying control at the walk, trot, and canter.