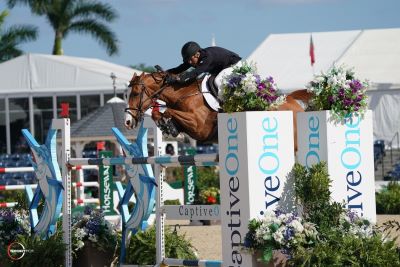 Wellington, FL — March 14, 2021 — In the $73,000 CaptiveOne Advisors 1.50m Classic CSI5*, the final class of the day in the International Arena for the ninth week of the 2021 Winter Equestrian Festival (WEF), Kent Farrington (USA) and Creedance, owned by Farrington and Haity McNerney, were uncatchable for victory on Sunday, March 14.

A total of 59 horse-and-rider combinations took their shot against Alan Wade’s (IRL) track. Featuring a line-up of 11 entries, the jump-off promised to be a hard-won effort, but the Farrington was a force to be reckoned with and ultimately secured the win.

Wade’s top courses have been well-planned and challenging all week, and his last course of the week held true. A lengthy number of competitors missed the chance to return for the jump-off by a single unfortunate rail while several others suffered time infractions.

Combinations that returned for the jump-off included top athletes such as Farrington, Daniel Deusser (GER), and McLain Ward (USA). Sweden’s Henrik Von Eckermann was the first to complete the second track fault-free after crossing the timers in 35.10 seconds with the Portfolio Horses, LLC’s Glamour Girl. His effort with the 10-year-old KWPN mare (VDL Zirocco Blue x Moonlight II) was enough to secure the third place ribbon at the end of the class. Eduardo Menezes (BRA) flew into second place with his own H5 Quintol. He and the 16-year-old Oldenburg gelding by Quintender x Cento managed an efficient time of 34.83 seconds but was still well behind the class leader.

Thirty-five pony hunter riders competed for the tricolor ribbon in the Medium Pony Hunter division, sponsored by Always Faithful Equestrian Club, in Ring 11 on Sunday. Due to the large number of entries, the class was held in a California split format and awarded two champions. Vivian Golden, of Reading, PA, piloted her own Goldhills As You Like It to the Section A championship, and Ava Barnes, of Liberty TWP, OH, aboard Ellie Sadrian’s Cleverist, earned the Section B top prize.

Golden has already been in the winner’s circle this week after she topped the $5,000 USHJA Pony Derby with D’Artagnan on Friday. Her success continued through the weekend with her long-time partner, Goldhills As You Like It. Golden and the 13-year-old Welsh Pony mare by Gayfields Call the Cops earned three firsts, a second, and a fifth place ribbon in the division to claim top honors.

“This is my third WEF on her,” explained Golden. “We have been together for a little while now, and she’s such a good girl and I love her so much. She has such a funny personality, and she goes to every show with us.”