LEXINGTON, KY — The day before the official start of the 2010 Alltech FEI World Equestrian Games, the stars of the reining world began their quest for the Reining World Championships, presented by John Deere, during the official horse inspection. Some 74 competitors from 22 nations presented their horses to the five-person ground jury. Three horse-and-rider combinations were not accepted, leaving 14 countries competing for team medals and seven countries represented by individual riders.

“The level of competition here is going to be second to none,” said Reining discipline manager Brad Ettelman. “This is truly the equestrian event of a lifetime for the U.S., and we are thrilled that Reining is experiencing a homecoming of sorts. Reining has experienced incredible growth internationally over the years, and we will certainly be showcasing the best the world has to offer at this WEG.”

Duane Latimer from Canada, the reigning individual gold medalist, is back to defend his title aboard a new mount, and Tim McQuay, a member of the U.S. gold-medal team in 2006, will help his defend their title again. Dressage star Anky van Grunsven of The Netherlands has traded in her breeches for chaps during these World Games and will attempt to make a successful transition to “Western” dressage.

END_OF_DOCUMENT_TOKEN_TO_BE_REPLACED

The American Quarter Horse Journal — During the 2010 Alltech FEI World Equestrian Games, September 25 – October 10, in Lexington, Kentucky, NBC Sports will provide six and a half hours of reining event coverage. AQHA is an official sponsor of the 2010 Alltech FEI World Equestrian Games and the official breed sponsor of reining.

This TV coverage marks the largest commitment a network has ever made to equestrian sports in U.S. television history.

END_OF_DOCUMENT_TOKEN_TO_BE_REPLACED

With teams made up of American Quarter Horse Youth Association members from 16 countries, spectators from all over the world can enjoy the exciting leadership and educational clinics, and Olympic-style competition thanks to America’s Horse TV.

To watch the Youth World Cup, visit www.americashorse.tv/youthworldcup.html for free live-streaming videos starting Saturday, July 3, through Sunday, July 11. To view the schedule of events, including clinics and competition times, visit www.aqha.com/youth/activities/ywc/2010/YWC_schedule.pdf. Please note trail will be judged “at-will” on Thursday, July 8, and Saturday, July 10. Video coverage of all trail competitors will be replayed 30 minutes following the last class each day.

END_OF_DOCUMENT_TOKEN_TO_BE_REPLACED

America’s Horse, June 21, 2010 – American Quarter Horse owners love their horses – past, present and future – and many want to keep track of those horses even after they are sold.

The American Quarter Horse Association developed the Full Circle program to reunite breeders and previous owners with horses they remember well. Through the free Full Circle program, AQHA members will be able to indicate on a horse’s registration certificate that if the horse ever becomes unwanted, unusable or simply ready for retirement, the member will – if possible – assist in providing or finding a suitable home.

Originally dubbed Greener Pastures, the program has been renamed Full Circle and enhanced. The Full Circle name more accurately reflects goal of the program when horses that were once sold by their original owner come full circle back to them, often times after lengthy careers enriching lives of multiple riders. Even in the program’s short existence, AQHA has received success stories from customers who have been reunited with horses they once owned. To read more about Full Circle, visit http://www.aqha.com/fullcircle.

END_OF_DOCUMENT_TOKEN_TO_BE_REPLACED

America’s Horse, May 6, 2010 – The American Quarter Horse Association has teamed with the Working Ranch Cowboys Association to recognize top horses at WRCA rodeos across the nation.

To honor the contributions ranch horses have made to the heritage of the American Quarter Horse, AQHA is proud to sponsor a special recognition award to the top horse at every WRCA sanctioned rodeo. The special achievement by these top horses will be placed on the horse’s permanent AQHA record.

Since the earliest days of chuck wagons and roundups, the working ranch horse has earned a spot in the history of the American West. No other animal has contributed more to that history than the American Quarter Horse.

END_OF_DOCUMENT_TOKEN_TO_BE_REPLACED 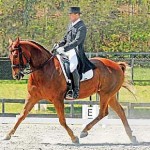 Dressage is now an official AQHA class — one in which you can earn AQHA points, qualify for AQHA Incentive Fund earnings and compete for year-end awards. Beginning at Training Level Test 4, AQHA dressage classes will be held within existing classes at competitions recognized by the United States Dressage Federation or licensed by the United States Equestrian Federation.

The same USDF-USEF judges will preside over the AQHA classes; the only additional requirement is that the judges must be AQHA members. Exhibitors must also be current members of AQHA, and the horse must be a registered American Quarter Horse. A competition license fee of $85, good for the lifetime of the horse, is also required. The shows must be approved by AQHA at least 60 days in advance.

Horses competing in dressage are given scores, expressed in percentages. The Quarter Horse show industry has always been a point-driven system, so AQHA has created a conversion table to change dressage scores into AQHA points. View the conversion table (click on “frequently asked questions”). Read more> http://www.horsesinthesouth.com/article/article_detail.aspx?id=10096