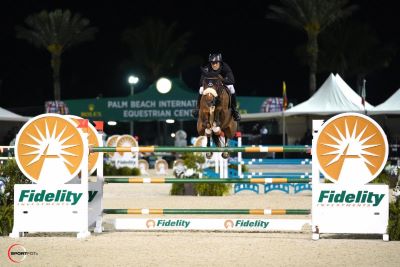 Wellington, FL – March 13, 2021 – Under the lights in the International Arena at the Palm Beach International Equestrian Center (PBIEC), Abdel Said (EGY) and his own Bandit Savoie stole the show with a stunning victory in the $401,000 Fidelity Investments® Grand Prix CSI5*, on Saturday, March 13, as part of the Winter Equestrian Festival (WEF).

In the third CSI5* of the 2021 winter circuit, a field of 39 starters attempted the 1.60m track built by Ireland’s Alan Wade, with nine jumping clear to qualify for the jump-off. Brazil’s Rodrigo Pessoa set the pace early as the first to return aboard Carlito’s Way 6, owned by Artemis Equestrian Farm, LLC, with a clear jumping effort in a time of 41.45 seconds. Their pace was fast, but the door was left open and those who followed found a way in.

Fourth of nine to return, Cian O’Connor (IRL) and Kilkenny flew around the shortened track, electing to leave a stride out down the final line and the risk paid off. He and the nine-year-old Irish Sport Horse gelding (Cardento x Mhs Pembrook Lady) owned by Ronnoco Jump Ltd moved into the lead with a clear effort, crossing the timers in 39.09 seconds.

Next to go, Said piloted his 10-year-old Selle Français gelding (Qlassic Bois Margot x Falmera) around the track effortlessly, opting to make up the time through the turns, moving swiftly across the ground in nine strides to the final fence to take over the lead in 38.70 seconds.

Forty-one horse-and-rider combinations were tested over the classic round course, designed by Tom Carlson, of 12 fences with four high options. The top 12 riders were called back to show off their rideability and style over a shortened handy round track including a trot fence. Two panels judged each round, and their scores were then combined for a total score in each round. 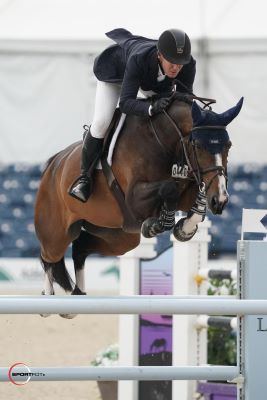 Wellington, FL – March 6, 2021 – McLain Ward and Blossom Z, owned by Wyndmont, Susan Heller, and McLain Ward, flew to the top of the podium for a victory in the $50,000 CaptiveOne Advisors 1.50m National Grand Prix on Saturday, March 6, in the International Arena at the Palm Beach International Equestrian Center (PBIEC).

A total of 25 combinations challenged the 1.50m track set by Steve Stephens (USA) and Nick Granat (USA) on Saturday afternoon. The first round consisted of 16 jumping efforts with a total of nine qualifying to return for the shortened second round.

First to go of the nine returning combinations, Ben Maher (GBR) and Kalinka De Kalvarie, owned by Poden Farms, set the pace for the remainder of the competition with a clear effort in 36.200 seconds.

Fifth in the returning order, McLain Ward rose to the occasion, topping the time set by Maher, with Blossom Z, an 11-year-old Zangersheide mare by Balou Du Rouet x Cleopatra Z, with a clear effort in 33.022 seconds.

There were 29 entries and 12 clear rounds in the morning class, and they were all going for speed over a course designed by Steve Stephens (USA) and Nick Granat (USA). The early leader was Daniel Deusser (GER) and Stephex Stables’ Calisto Blue, who set a time of 60.66 seconds that would hold up for third place. Near the end of the class, Andrew Bourns (IRL) and Darquito broke the 60-second barrier to finish in second place on 59.69 seconds.

However, it was Said and Arpege du Ru who couldn’t be beat, finishing the course in a speedy 57.98 seconds for the win.

Said has ridden Arpege du Ru for three years, having received a phone call from his Global Champions League teammate Marlon Zanotelli about a horse he had for sale that he thought would make a good junior jumper. 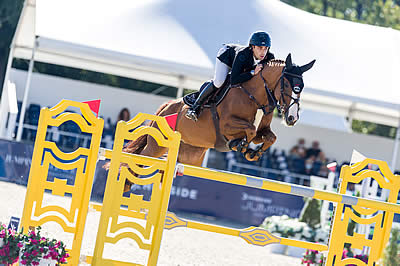 First to set off in a jump-off which counted fourteen qualified among the fastest riders and horses in the world, the Egyptian Abdel Saïd, associated with the French mare Arpège du RU, won with an express chronometer in the major event of the CSI 4* of the HUBSIDE JUMPING in Grimaud. He is ahead of the Northerner Nicolas Delmotte, second with Urvoso du Roch, and the Dutchman Jur Vrieling, on Fiumicino van de Kalevallei.

“Arpège du RU is a naturally very fast mare, which really makes life in a show easier. I had a plan for this jump-off event, which was to try everything. Sometimes you come to a jump-off and say, ‘I’m going to save the horse for the future.’ But in our case, I had foreseen that this event would be the biggest that Arpège would run this weekend and therefore, we had to give everything. Sometimes it works, sometimes not. Yes, it worked perfectly. I really love this mare; she is very smart and loves to win. I have been riding her for two years, and together I have to say that we have already had some very good results. This year, it has been difficult for us to go to competitions, as for everyone; I was lucky to be taken on this fantastic contest that is the HUBSIDE JUMPING this weekend, so it was important to sign great performances. So far, I must admit that it is going very well.” 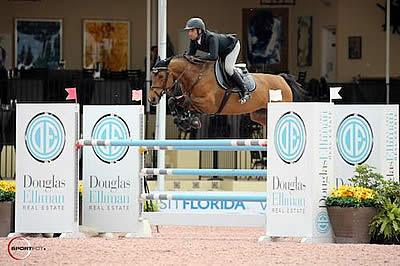 Alan Wade (IRL) is the course designer in the International Arena at PBIEC for WEF 9. Wade began the week with 53 starters over his 1.45m track, held in a two-phase competition, with 18 double clear rounds.

“Hope is a very special horse,” Said described of the ten-year-old Belgian Warmblood mare (Quadrillo x Balou du Rouet). “She has a lot of character, and she is very competitive. She can be super-fast when she wants to. She has her days – some days she doesn’t want to play, so I have to respect that.

“I watched Daniel’s round, but his horse is so different from mine,” Said detailed on his win. “His is a big, classic horse that can really work on the strides. Mine is naturally super-fast. Even if I do more strides than him, she can win with her speed, and she was really fast in some of those turns. I just kind of made my own plan with her. She is better that way.”

Said had a great 2016 season with Hope, which included a win in the Longines FEI World Cup qualifier in Verona, Italy in November. The rider is based in Antwerp, Belgium throughout the year, where he runs his own training and sales program.

Remarking on his second season competing at the Winter Equestrian Festival, Said stated, “I enjoy it here. The people are all very friendly. And of course my business is selling horses, so it is fun to follow up on the horses we sell and be here with the clients. It is super interesting.”

Also competing in the International Arena on Wednesday, the first class of the day was the $8,000 Douglas Elliman CSI 2* 1.40m with a win for David Arcand (CAN) aboard Hawaii van Paemel. The $1,000 CSI 5* Douglas Elliman 1.40m followed with a win for Jaclyn Duff (CAN) riding Windermere Stable’s EH All or None. Spain’s Sergio Alvarez Moya and Iron Man 111 were victorious in the $6,000 Illustrated Properties 1.40m to conclude the day. 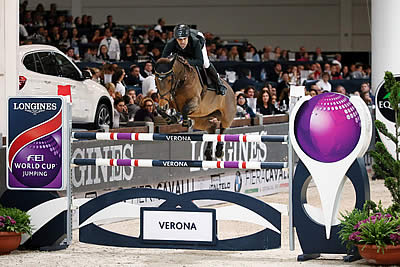 Verona (ITA), 13 November 2016 – In the most thrilling jump-off of the season so far, wild card rider Abdel Said from Egypt left many of the sport’s greatest stars in his wake when winning the fourth leg of the Longines FEI World Cup™ Jumping 2016/2017 Western European League at Verona, Italy. It isn’t easy to get an invitation to compete at the top shows when you are 142nd in the world rankings, but the 27-year-old set an impossible target when third to go in the 13-horse jump-off with his feisty mare Hope van Scherpen Donder, and not even world no. 2, Simon Delestre from France, could catch him.

Delestre won the Verona leg last year and is no shrinking violet when it comes to speed against the clock. Last to go with Chesall Zimequest the 35-year-old rider gave it everything he had, but as he said afterwards, “Abdel was almost invincible today! I was two seconds slower, but I’ve no regrets because I’ve picked up good points towards the Final!” He is now just six points behind Western European League leader Romain Duguet from Switzerland going to the fifth leg in Stuttgart, Germany next Sunday, and a ticket to the Longines Final in Omaha, Nebraska (USA) next March already looks well within the Frenchman’s grasp.

There were 10 clears from the first 21 riders over Uliano Vezzani’s track, but then only three more of the 37 starters managed to make the cut into the jump-off. And despite the best efforts of three of the Rio 2016 Olympic Games gold-medal-winning team from France – Philippe Rozier, Penelope Leprevost and Kevin Staut – it was the younger generation that really shone when 24-year-old Swiss rider Martin Fuchs produced a careful clear with Clooney to slot into third while 25-year-old Swede, Douglas Lindelow, did likewise with Zacramento to finish fourth.

Said’s fearless gallop and breathtaking turns brought him through the beam in 37.96 seconds. “My mare has won three Grand Prix but not at this level. She’s only nine and she doesn’t have mileage like most of the horses in today’s class, but I trusted her,” said the rider who runs a coaching and training business near Antwerp, Belgium.

He was determined to make the best of his wild card opportunity. “I don’t have any big sponsors but I have some very good students and I produce many nice young horses – I produced this mare since she was seven. I hope this win shows people I am serious, and that today’s success will open a few doors for me!” he added.

Abdel Said EGY (1st): “When I was young I trained with Emile Hendrickx for eight years; at the same time I studied in Holland, and then I got my first job with Jos Lansink when I was 19.  Then I started my own business when I was 21. I’m now 27; I started from nothing, no groom, just a truck my parents bought for me. Seven years down the road have a farm near Antwerp and we are progressing, slowly but surely; most of the horses I try to own myself; I buy them young, build them up and produce them myself and hope it works out.”

Simon Delestre FRA (2nd): “Today for sure there was a little bit of pressure because of my win here last year, but I had a different horse then – it was Ryan. However, Chesall is also a special horse. When I walked the course it looked difficult, but when it started there were a few clears and I was worried there would be too many clears. But in end it was perfect and we had a fantastic jump-off.”

John Roche, FEI Jumping Director: “Congratulations to the Verona organising team under President Danesi for an amazing event. Also congratulations to the course designer, Uliano Vezzani, for producing an amazing course and fantastic sport. Our thanks go to Fixdesign as presenting sponsor and to Longines without whom all this not would to be possible and to whom we are forever grateful.”

Martin Fuchs SUI (3rd): “I think the course designer Uliano Vezzani showed again today that he is smarter than most of us riders! When we started there were many clears, and many riders were upset the he didn’t reduce the time allowed after the first few riders, but he showed us with 13 clears that the course was just what it had to be!”

Abdel Said EGY (1st): “I was here two years ago and this is one of my favourite shows. I didn’t come last year, but I got a wild card from John Roche (FEI Jumping Director), they go to small countries to give them a chance get to shows like this and I’m very grateful. I’d like to thank Uliano because he is my favourite course designer. He built two Grand Prix courses I competed over and I won both of them so I want to take him home with us!”