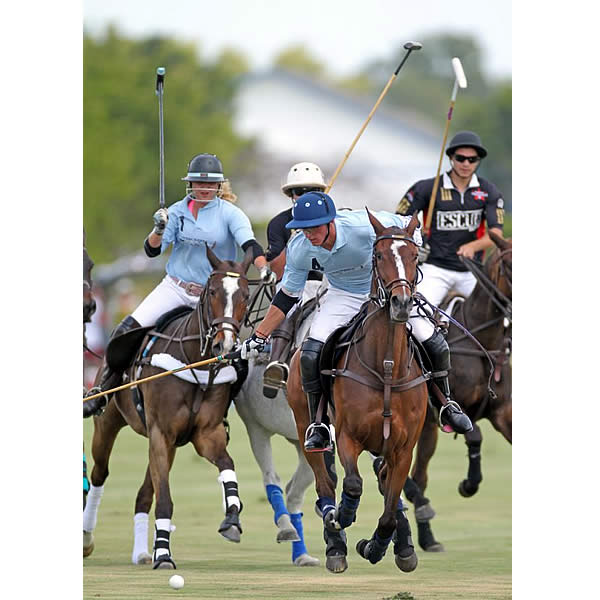 In Monday’s opening action at Jan Pamela Field, Tackeria advanced with a 10-6 victory over Escue in the opening four-chukker Division I game. Tackeria led for all four chukkers.

A day after playing in the U.S. Open for Audi, Tackeria’s Juancito Bollini, 16, a senior at Wellington High School, and Matt Coppola, each scored three goals.

Lauren Biddle, the only girl player in the game, scored two goals, including one on a penalty shot.

For Escue, Johnny Lavine, coming off his MVP performance in the Grand Champions Cup, led scoring with three goals. Also on Escue were Liam Lott, Geronimo Obregon and Ayaan Quraeshi.

Wesley Finlayson scored three goals and Agustin Arellano added one for Far Niente, which led the game from the opening chukker. Michael Bellissimo rounded out the Far Niente roster.

Matias Gonzalez, 14, an eighth grader at Polo Park Middle School, who also has been playing 26-goal polo, was leading scorer with two goals, including one on a penalty shot. Gonzalez was joined by teammates Marcos Alberdi, Wesley Bryan and Grant Ganzi.

In the Division II flight, Grand Champions, Pony Express and Polo School at Grand Champions took turns playing round robin play over six chukkers. The round robin will continue on Tuesday at 5 p.m., also at Everglades Polo Club. The score will be carried over.

International Polo Club is one of eleven polo clubs nationwide that are hosting a NYTS tournament to help promote the growth of youth polo.

The thirteen USPA circuits have been divided into six geographical zones. Each zone will have a Zone All-Star Selection Committee that will choose at least four players and two alternates to represent their zone in the NYTS National Championship, scheduled this year for Labor Day Weekend at Virginia International Polo Club. The national tournament site will rotate annually.

Wellington and southeast region have been combined in Zone 4.

Junior players must be USPA members, have a USPA handicap and not exceeded their 19th birthday on January 1 of the calendar year. There are approximately 800 registered USPA junior members, ages 19-and-under.

Currently, the USPA has the Interscholastic and Intercollegiate programs for high school seniors-and-under and college student-athletes.

The program highlights players on four different areas: horsemanship, sportsmanship, playing ability and how they contribute as a team player.

Trophies, All-Star medals and participation medals will be awarded. Tournament results will be published in the annual Blue Book.