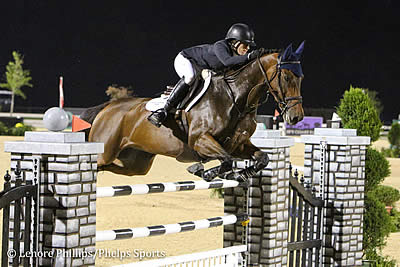 Lexington, Ky. – Aug. 4, 2018 – Sydney Shulman was one of nine horse-and-athlete combinations to re-enter the Rolex Stadium on Saturday night under the lights for the jump-off of the $50,000 Kentucky Summer Grand Prix, sponsored by GGT Footings. Jump-off rider extraordinaire Aaron Vale had set a blistering pace in 37.390 seconds, and although Alex Granato and David Oberkircher had beaten his time, they could not complete the short course fault-free. Enter Shulman on Villamoura as the last combination to challenge Vale. She not only beat his time but beat it by over one second to stop the clock in 36.190 seconds, simultaneously winning the week’s feature class and taking home Leading Rider Award, presented by Envisian Products, LLC.

Saturday’s class was the culmination of a week of exciting open jumper competition during the Kentucky Summer Classic. The 13-obstacle track, designed by Brazilian Anderson Lima, saw nine riders return for the jump-off after an original field of 32 starters competed. Jimmy Torano, who was second in the order-of-go on Ilan Feder’s Glasgow de Muze, set the standard with an early fault-free round hoping for a repeat of his win on Saturday at the Kentucky Summer Horse Show. Granto and Scott Keach, who both showed multiple horses, produced two clear rounds each and were followed by equally competitive Vale on Major. Callie Schott and Shulman qualified with one horse each and knew they would have to bring their A game to beat the boys.

Shulman and Villamoura have been partners for almost a year and have racked up multiple important national and FEI top placings. The young professional from Greenwich, Connecticut, recently finished second in the $35,000 Welcome Stake CSI2* at the Tryon International Equestrian Center in June as well as finishing with runner-up honors in the $50,000 Old Salem Farm Grand Prix CSI2* during the Old Salem Farm Spring Horse Shows. The pair was also fourth in the Kentucky Summer Horse Show’s $50,000 Rood & Riddle Grand Prix during Hats Off Day. Although the 9-year-old Selle Français mare is small in stature, Shulman has seemingly had no issue channeling her energy to help her keep up with larger horses. The pair stuck to their plan and bested Vale with neat turns and forward lines.

Due to her strong performance during this week’s Kentucky Summer Classic, Shulman was also awarded the Leading Rider Award, presented by Envisian Products, LLC, which recognizes the open jumper rider with the most points at the conclusion of the week’s competition.