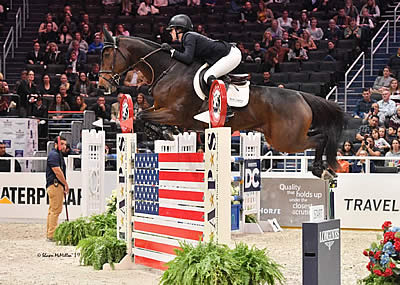 The 61st Washington International Horse Show (WIHS) continued on Friday, October 25, with thrilling displays of speed and power. Israeli rider Sydney Shulman of Greenwich, CT topped the $50,000 International Jumper Speed Final on Villamoura, while Aaron Vale and Schuyler Riley of the United States shared victory in the $25,000 Land Rover Puissance. The classes were part of a full schedule of exciting competition and entertaining exhibitions during Military Night, presented by Caterpillar, Inc.

Shulman, 24, came to WIHS to jump in the international jumper division for the first time with a pretty specific goal. “I came here with the plan to do just these two speed classes and hopefully be in the top five, with all these elite riders in the classes,” she said.

She ended up winning both of them. Shulman rode Villamoura, a 10-year-old Selle Français mare by Diamant de Semilly and owned by Jill Shulman, to the blue in the $50,000 International Jumper Speed Final, adding her name to the General Dwight D. Eisenhower Memorial Perpetual Trophy donated by the late Arthur J. Morris. The night before, she and Villamoura won the $36,000 International Jumper Accumulator Costume Class.

Aaron Vale and Schuyler Riley Share the Win in the $25,000 Land Rover Puissance

The win in the $25,000 Land Rover Puissance came down to a battle between a three-time WIHS puissance-winning horse and a horse contesting the class for the first time. In the end, they tied for the win, with both Aaron Vale and Finou 4 and Schuyler Riley on Very Chic Du Tillard clearing the 6’9″ height.

Vale and Finou 4, a 13-year-old Hanoverian gelding by For Pleasure owned by Thinks Like A Horse, had won the class the last three consecutive years and were hot favorites. Five other horse/rider combinations joined them on the starting list. “There was a good group of horses and riders tonight, so it was a little tougher class than maybe the last few years,” Vale said. “You never go in thinking you’re going to win.”

Riley described E2 Show Jumpers’ Very Chic Du Tillard, a 10-year-old Selle Francais by Diamant de Semilly, as a horse with the experience level of younger horse. He was jumping in his first Puissance class and has spent the majority of his show experience at the 1.45m level. “I knew he has the scope and the talent, but I knew he’d never done one before, so I sort of expected to go in there and jump one or maybe two and then come out, but he jumped it so easily,” Riley said.

The Puissance is a favorite event for Vale, of Williston, FL, who has now won the class six times. His first win came in 1996 with Big Joe. “In America, we don’t have great crowds too often, and this night is one of the best crowds of the year for the Puissance here,” he said.