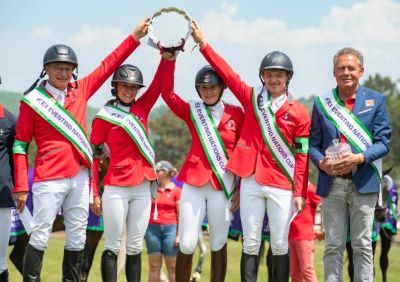 It was a double victory for the Swiss, when Robin Godel’s Jumping clear round clinched the individual prize and a win for Team Switzerland. This was the first leg of the FEI Eventing Nations Cup™ and took place in Pratoni del Vivaro (ITA). France, who were overnight leaders going into the final day, finished a close second, and Sweden, who were overall winners of the Series in 2021, finished third. The home side Italy was fifth.

It was a tense finish after the French team left Godel no room for error in the Jumping phase. The 23-year-old athlete kept his cool on Grandeur de Lully CH, to incur just one time penalty which sealed the deal for his team. “I was very focused, but I tried to have only good pressure,” he said after his round. “It was an amazing week for the team. We did good on the cross-country; the four riders were very impressive and the horses gave all they had. For the World Championships it is exciting.”

Speaking about this as a test event for this year’s FEI World Championships for Eventing, Godel said, “It is amazing here; the ground is wonderful; I have never cantered on ground like this. For the World Championships, we want qualification for Paris (Olympics) and that’s the main focus and for sure we will be going for the podium too.”

Pratoni has proved a happy hunting ground for the Swiss, who won the Nations Cup here in 2019. The team this year consisted of two Nations Cup first timers: 62-year-old Beat Sax, who has just one horse to compete and has been eventing for 45 years, and 20-year-old Nadja Minder. They were joined by Tokyo Olympic riders Godel and Mélody Johner.

Six-time Olympian Andrew Nicholson has been coaching the Swiss team for several years and summed up their performance: “It was outstanding. They keep getting better, more confident, and are pulling together as a team. They are passionate and want to do it and they are making the younger ones hungry, which then pushes the older riders.”

Saturday’s Cross-Country shook up the leaderboard and left it tight at the top. Switzerland finished just 0.1 of a penalty behind France going into the final phase. Germany, who led the way after the dressage phase, was relegated to 9th after just two of their team members completed. Sweden, who was in eighth after the dressage, produced four strong Cross-Country performances to climb to third.

Pratoni del Vivaro will be hosting the FEI World Championships for Eventing and Driving, from 15-25 September. Course Designer Giuseppe della Chiesa and Director of the Championships concluded: “From a sports side the cross-country went well here this week. From the side of the organisation, there’s a lot to do yet but we are getting there, and it was very important to have this competition as a Nations Cup and also as a test event. The nature of the soil here is something unique. Horses love it and if it rains, it doesn’t change it and there are very few places in the world like that. It is an important venue as the Olympic venue in 1960 and is one of the very few Olympic venues which is still used for the same purpose.”

The FEI Nations Cup™ Eventing action moves to Houghton Hall (GBR) from 26-29 May, the second of nine events in the FEI Eventing Nations Cup™ Series.