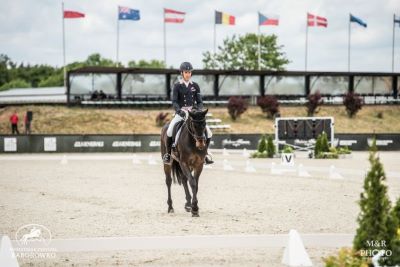 Baborówko, May 26th, 2022 – The first out of five days of international competition Equestrian Festival Baborówko is already behind us. The first parts of the dressage trials were played out in the CCI4*-S, CCI3*-S, CCI2*-S, and CCI1*-Intro.

After the first rounds of the highest subsidized class of the show – the CCI4*-S, for the prize of the Patron of the event, Mr Roman Roszkiewicz – the leader is Switzerland’s Felix Vogg riding Cartania. The highest placed Polish athlete is currently Robert Powala riding Quirino Del Castegno.

In the CCI3*-S, for the Kuhn Maszyny Rolnicze Trophy, the top of the leaderboard belongs to German riders. Anna Lena Schaaf is in the first place with Lagona Old, followed by Antonia Baumgart with Ela Lou and Julia Krajewski riding Chintonic 3.

In the 2*-S, for the trophy of Badix, the best result currently belongs to Janneke Boonzaaijer (NED) with Intermezzo Dea. Jerome Robine (GER) lies in second with Coby R, and Jan Matthias (GER) is in third riding Ibsen 27.

The leader of the CCI1*-Intro, for the trophy of Canter Club, is Malin Petersen (SWE) with Dancer Monkey 7, followed by Antonia Baumgart (GER) with Juna R and Lotta Lamberg (FIN) with Come In Like a Rose.

The dressage trials will continue in the CCI4*-S, CCI3*-S, CCI2*-S, and CCI1*-Intro. We will also begin the rivalry in the CCI4*-L for the prize of Lotto, where the athletes will have a chance to qualify for the World Championships, and in the CCIYH2*-S for young horses, for the trophy of Kunowo Stables.

More information and the program can be found at: www.festiwal.baborowko.pl.