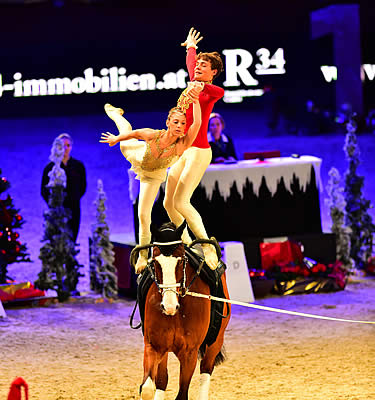 Italy’s Erika di Lupacchini and Lorenzo Forti were a picture of elegance when winning the Pas-de-Deux at today’s third leg of the FEI World Cup™ Vaulting 2015/2016 series in Salzburg, Austria. (FEI/Impressions..Daniel Kaiser)

The electric atmosphere of the arena at the Amadeus Indoor fixture staged ensured that both horses and vaulters needed maximum concentration. But the winners all rose to the challenge in fine style, and the increasing confidence of the Italian pair saw them produce a particularly impressive result.

Jäiser, who reigned supreme at the opening leg of the series in Madrid (ESP) seven days earlier, led the way in yesterday’s first round of the Individual Female competition. But Italy’s Anna Cavallaro who won the second leg in Paris (FRA) a week ago really pushed the reigning European Freestyle champion for the honours this afternoon. The Swiss vaulter’s score of 8.317 left her in second place behind her Italian rival, but Jäiser’s combined score from the two days gave her the edge by the narrowest of margins – just 0.003 points.

“Today it was great to be back on my own horse that I know really well!” said the 29-year-old athlete who was runner-up at last season’s FEI World Cup™ Vaulting Final in Graz (AUT). In Madrid, all but one of the vaulters were paired with borrowed horses so success was hard-earned, but this time around Jäiser was on familiar territory once again when performing with her lunger Rita Blieske and her stalwart 12-year-old chestnut gelding Luk.

“The stadium was very full, much more than yesterday, but it felt great to compete in there with a big audience and under those lights!” she said afterwards. Reflecting on her performance, she said, “The beginning was very good; now that the World Cup competitions are longer I find that the old stuff is in my head and my body, and I can go through those movements and positions very easily, although the new part takes a lot more concentration,” she admitted.

Following a recent rule change for FEI World Cup™ Vaulting, individuals now have an additional 20 seconds for their performances, extending them from 1 minute to 1 minute 20 seconds, so competitors have had to extend their sequence of movements. “It’s not that it is much more difficult; it is just more to remember! I’m very happy with it though,” Jäiser added.

Jannis Drewell’s victory in the Male Individual looked almost inevitable after a brilliant first round yesterday in which he pinned French rivals Vincent Haennel and Clement Taillez into second and third places. The 24-year-old is a real showman as he demonstrated when leading the German assault on all three medals at this summer’s Europeans in Aachen on his extraordinary debut at Championship level. In his now-familiar orange robe, he once again thrilled with jumps, kick-boxing and his very particular kind of “planking” in which he carries his entire body weight in suspension.

“I have been doing that since I was in Juniors and I have been practicing it for a long time so it’s fairly easy for me. I put in an extra one from the side to the front and then I put two together and its looks really cool. I train a lot for upper body strength and for coordination,” Drewell explained.

“My big aim is to produce a performance that the audience will really enjoy – I want them to have fun!” said the young man who previously presented today’s programme in Munich. “I think the mounting at the beginning is the biggest part of my Freestyle but it didn’t work perfectly both days here in Salzburg. Normally it is better,” he said.

Talking about the leggy 16-year-old gelding, Lago Maggiore, which was lunged by Simone Drewell today, he said, “He is my own horse that I have had for more than three years now. I did some CVIs with him this year and I’m very happy with him because he stayed really cool for me here in Salzburg. The white horse I had in Aachen – Diabolus – well, he might have gone ‘uh oh… what’s going on here?’ once he came into the middle of this arena! So that is why I chose Lago: he is always very calm and sensible. This is not like a normal vaulting arena in Salzburg, but it was really cool for me to be in such a big arena with such a great audience!” he added, after finishing ahead of Taillez in second and Haennel in third after two rounds of competition.

The Pas-de-Deux winners, Lupacchini and Forti, also headed the line-up yesterday when pipping the pair who came out on top in Paris a week ago, the USA’s Cassidy and Kimberly Palmer. But any chance the sisters had of overtaking their Italian counterparts was shattered by an early fall for Cassidy during today’s routine. Literally thrown off their stride, the American girls just couldn’t retrieve the situation and ended up finishing a disappointing fourth at the end of the day.

It was Jolina Ossenberg-Engles and Timo Gerdes who presented the strongest challenge to the winning two-some, the German pair who just missed out on selection for this summer’s FEI European Championships looking suitably delighted when dismounting after their complicated Romeo and Juliet programme which they performed with greater confidence and fluidity than when they finished third in Paris last Saturday night.

However, the Italian duo were in a class of their own, demonstrating a balletic quality in their holds and great ease in their expressive and beautifully-executed high moves. Their pleasing choreography produced a captivating performance for a double-victory and a two-day total of 7.930 which left them well clear of Ossenberg-Engels and Gerdes in second place and Switzerland’s Zoe Maruccio and Schmid Syra in third.

After the busy start to the new FEI World Cup™ Vaulting season, there is now a three-week breathing space before the battle resumes at Mechelen in Belgium on 26 December.

The fourth leg will take place in Mechelen (BEL) on 26 December. For all information on the Belgian fixture, visit www.jumping-mechelen.com or contact Press Officer Edith de Reys, edith.dereys@skynet.be, +32 475 65 92 81.