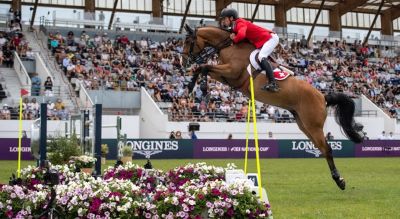 Team Jumping lived up to its reputation for edge-of-the-seat excitement when Switzerland won through in a thriller at the second leg of the Longines FEI Jumping Nations Cup™ 2021 Division 1 series at La Baule in France.

The Swiss were returning to the scene of their triumph at the last event to be staged in the French seaside town in 2019, and it fell to Beat Mandli to clinch it for them with one final run. The double-Olympian and 2007 FEI Jumping World Cup™ champion didn’t flinch, producing a copybook tour of Frederic Cottier’s course that proved plenty challenging during a brilliant day of sport.

His side finished on a four-fault tally to pip the exciting second-placed Italian team who posted a total of seven, while Belgium lined up in third on a total of eight, just one fault ahead of Great Britain with nine.

The 2019 Longines FEI Jumping Nations Cup™ champions from Ireland were sharing pole position with the Swiss on a zero score at the halfway stage, but had to settle for fifth place with 12 faults in the final analysis while Mexico, The Netherlands, Brazil, France, and Sweden lined up behind them.

There was no let-up on Cottier’s unforgiving track, but 15 horse-and-rider partnerships managed to keep a clean sheet first time out and when the Irish and Swiss produced six of those between them, they jointly led the way into the second round.

Great Britain and Italy were stalking them closely with just single time faults on the board, but while the British lost their grip when adding eight more second time out the Italians challenged to the very end. Out of the 10 nations that competed, Italy is the only one not qualified for the Tokyo 2020 Olympic Games, yet they finished ahead of all but one of their rival countries, so this was an afternoon for Chef d’Equipe Duccio Bartalucci and his side to relish.

Meanwhile, at the other end of the spectrum, little went right for Sweden. They produced a fabulous victory in the first leg of the new season at St Gallen, Switzerland last Sunday where the hosts finished third. But Henrik Ankarcrona fielded a different team, and when pathfinders Angelica Augustsson Zanotelli had a second-round fall, following which her horse, Kalinka van de Nachtegaele, jumped out of the arena, they ended up with a big score of 31 faults.

As the last-line riders took their turn it seemed the Belgians might finish with just four on the board to stay well in contention, until a mistake from Niels Brynseels’ Jenson van’t Meulenhof raised that to eight. Over in the Italian camp, Ricardo Pisani and Chaclot produced one of the five double-clears of the day before Fabio Brotto and Vanita delle Roane collected five faults. But Filippo Bologni and Quilazio, who left two on the floor first time out, really rose to the occasion this time out when picking up just a single time fault. So if Luca Marziani and Lightning could be fault-free again, they would be the clear winners on just two time faults because the Irish were out of it and the Swiss couldn’t do better than four in the closing stages.

But Lightning struck both the tricky white planks at fence 10 and the first element of the final double, so they would have to settle for runner-up position.

Second-last to go, Mandli had all the weight on his shoulders as he set off for Switzerland. Newcomer Eilian Baumann had followed his opening clear with Campari Z with a mistake at the dreaded final double, while Steve Guerdat’s Albfuehren’s Maddox faulted at both elements of the same fence.

Martin Fuchs and Conner 70 produced a second spectacular clear, however, so if Mandli could leave all the poles in place they would deny their Italian rivals. And he did it with such ease with his lovely 13-year-old mare.

It was a big day for Michel Sorg, because this was his first win since taking over the role of Swiss Chef d’Equipe: “I first came to La Baule as a spectator many years ago, and for me it’s a dream to come here for the first time as Chef d’Equipe and get my first win with my team!

“Beat had a lot of pressure because he had to be clear and he hadn’t jumped the first round, but he was fantastic! He was already very good in St Gallen last week where he was double-clear with Dsarie in the Grand Prix and had just a fence down in each round in the Nations Cup.

“For Martin it was the first time Conner jumped such a big course. He was double-clear with Leone last weekend so he’s in great form. Elian had never ridden in a Nations Cup 5-Star so to get a clear and four faults is amazing too, and for Steve’s Maddox, it was also a first top Nations Cup and with a clear and eight faults I’m happy, because all riders could bring something to the team today,” he said.

His decision to include the relatively unexposed Baumann was made because the 32-year-old rider “has achieved many great things in Grand Prix at national level, and last week in St Gallen he jumped double-clear in the Grand Prix and finished in sixth place. He’s a fantastic rider and partner for the other riders, and his horse is fantastic also. I was very happy he was with us today and I know this has been very special for him. I’m proud of every one of them!” Sorg concluded.