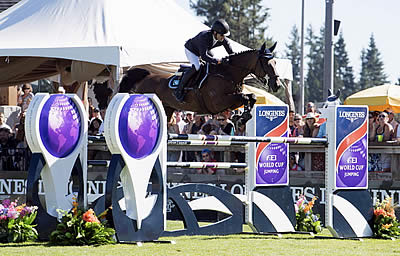 Ireland’s Conor Swail and Flower did nothing but win at the Thunderbird Show Park, as the pair completed the sweep by topping the Longines FEI World Cup™ Jumping Langley, kicking off the west coast sub league of the series.

Although declared for the east coast sub league, Swail arrived on the west coast, hungry for valuable ranking points, and the Irish rider came away with the lion’s share of those by proving fastest in a seven-horse jump-off designed by fellow Irishman Alan Wade. Christopher Surbey (CAN) and new mount Daylight VDL finished second, and Jamie Barge (USA) and Luebbo were third. Earlier in the week, Swail and his 12-year-old Belgian Warmblood mare also won the Maui Jim Welcome Stake and the Steel-Craft Door Products Cup.

“I just continued with the same process that we came here with. It was working very well, so there was no need to try to change too much. My mare was absolutely outstanding, and it was really good to finish it off with the win.” — Conor Swail (IRL)

Last to go in the jump-off, Swail had only Surbey to catch, and a loose gallop up the first three fences left him with room to spare down the final line. Swail and Flower ended up comfortable winners; they were nearly four seconds faster that the runners up.

“I knew the time was easily attainable,” Swail explained. “[Flower] is very good at running and jumping, so I let her run and jump the first few jumps. I didn’t take any major risks and just knew that, with the way she was jumping, she would leave the jumps up as long as I didn’t make any mistakes.”

The North American League continues with a return to the east, with the qualifier in North Salem (NY) on Sunday 17 September 2017.

Conor Swail (IRL): “It’s an early relationship that I have with [Flower]. She is a little unique. She can be quite difficult to ride at times. She’s very spooky and can see stuff that’s not there. She has an extremely funny character, but when she goes into the ring, she’s not spooky at all. She’s dead brave and very careful. I’ve been trying to level out all those situations and make her trust me as much as we can. It’s getting much more consistent. We’ve won a lot since I got her in early January. I feel now that I’m starting to get all the pieces in the right places consistently.”

Christopher Surbey (CAN): “For me, my horse is not as naturally quick as Conor’s horse. He has a really big stride, but he’s a bit slower moving. I had a plan where I could leave stride out here or there. I don’t have much experience with this particular horse. My goal was to be clear and as quick as I could, but I left a lot on the table.”