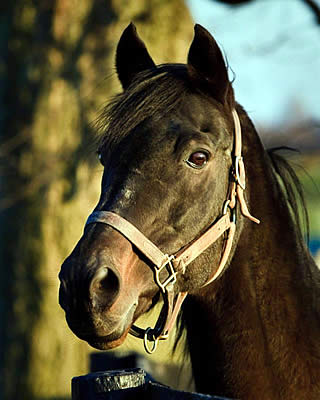 GEORGETOWN, KY – MAY 9, 2016 – Wallenda, a multiple graded-stakes winner, was euthanized today at Old Friends, the Thoroughbred Retirement farm in Georgetown, KY., where he had been pensioned since 2007.

The 26-year-old stallion had been dealing with complications brought on by a collapsed suspensory.

“He was, by any definition, a warrior,” said Old Friends founder and President Michael Blowen. “Like his sire, Gulch, who was also with us for many years, Wallenda was one of the toughest and most resilient horses we have ever known.

“Despite his ongoing hoof issues, he maintained a gleam in his eye and vibrant attitude,” Blowen continued. “But today his demeanor changed, and after much discussion with our vet, Dr. Bryan Waldridge, the vets at Hagyard, and the amazing farriers at Dr. Bryan Fraley’s Equine Podiatry, we felt Wallenda’s medical issues had reached the point where we could no longer maintain his comfort or quality of life.”

Named after the famous aerialist Karl Wallenda of The Flying Wallendas, the horse was bred by Peter M. Brant and Haras Santa Maria de Araras, and was later purchased by Cot Campbell’s Dogwood Stables.

A Kentucky Derby contender in 1993, Wallenda went on to win the Pennsylvania Derby, though his greatest victory came later that year in the Louisiana Super Derby, where he beat Saintly Prospector at the wire for the $400,000 purse.

Entering stud in 1995, the dark bay stallion went first to New Zealand and later at Toyosato Stallion Center in Hokkaido, Japan.  Old Friends, with the help of Dogwood, trainer Frank Alexander, members of the stallion’s syndicate, and loyal supporters, returned Wallenda to the United States in 2007.

“We’re extremely grateful to Dr. Fraley and his team for their continued care and creative approach to Wallenda’s welfare and comfort,” said Blowen, “and we’re grateful to Cot Campbell and everyone who helped us bring him home from Japan. He was a favorite here on the farm and we will miss seeing him every day.”