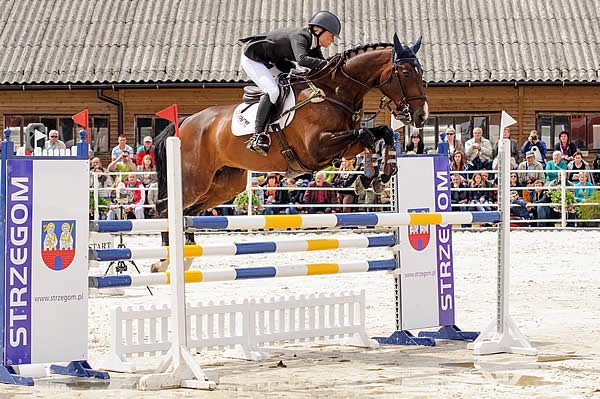 Strzegom, 03.06.2013 – The CI long 3* competition in Strzegom ended up with the victory of Sara Algotsson-Ostholt. The Nations Cup had to be cancelled due to severe weather conditions.

Only three out of five pre-planned international competitions were hold in Strzegom this year. CI long 3*, one of the most difficult contests, was among these which took place in Morawa. The most difficult and very important since it enables competitors to get qualified for the European and World Championships as well as for the Olympics. The best result in this event was scored by the representative of Sweden and the Olympic vice-champion, Sara Algotsson-Ostholt. After the clear round in show jumping with her considerably young 9-year-old mare Reality 39, she went up by 1 place and finished first with the best result of 55,40 penalty points.

Another Swedish pair and initial leaders, Niklas Lindbäck and Cendrillon, went down by one place after fences down in show jumping and eventually took the second place in the contest and made it to the podium with the result of 61,20 penalty points.

Yet another Swedish duo, Johan Lundin and his beautiful Johnny Cash, scored the best result in a cross country, but the marks they got in a dressage test and one fence down in show jumping worsened the final result. The rider eventually took the third place with the result of 62,40 penalty points.

One and only Polish competitor, Pawel Warszawski, riding for LKJ Gabon Walewice club, decided to retire on course after his mare, Hatteria, swerved before a fence no. 10.

35 competitors took part in CI long 3*. Only 19 finished the competition.

The representative of Germany, riding 10 year old gelding named Emiljo, had taken the lead right after the dressage test. With her superb show-jumping and cross-country results she managed to maintain and defend a leadership position with the final result of 37,20 penalty points.

The second place with the result of 42,70 penalty points was taken by the Swiss rider, Felix Vogg and his 8 year old ride Glenn Grant 5. Excellent dressage test and clear cross country allowed him to maintain the second place even though he had one fence down in show jumping.

If it’s about the representatives of Poland, Pawel Spisak (competing for JKS Dako Galant Skibno) and his new ride Pasja came in fourth. He went up by 8 places and finally scored 45,90 penalty points.

CIC short 2*: competition finished with the victory of the representative of Finland, Sanna Siltakorpiand, and her 8 year old gelding named Bofey Bridge.

A wonderful dressage test and only one fence down in show jumping guaranteed Sanna first place in podium. Despite exceeding the time allowed by 2 seconds she maintained the position and became the winner with the final result of 46,70 penalty points.

The second place belongs to a very experienced and well-known competitor Dirk Schrade. Riding for Germany, Dirk scored 47,30 penalty points together with his considerably young 7 year old ride Cisko A.

Another representative of Germany, Andreas Ostholt, came in third with a slightly worse result of 47,80 penalty points. Andreas competed in CIC 2* with his very experienced and very beautiful 19 year old gelding named Castell 4.

The best Polish rider competing in short 2* turned out to be Aleksander Kadlubowski riding Devin du Maury, 12 year old stallion. The pair placed themselves twelfth with the final result of 57,00 penalty points.