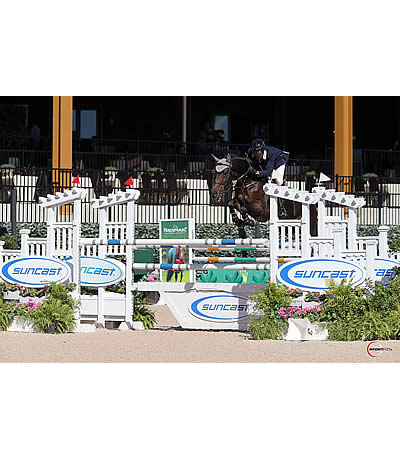 Mill Spring, NC – October 18, 2015 – Tryon International Equestrian Center (TIEC) hosted the first of two back-to-back weeks of internationally recognized FEI CSI 3* competition this past week, spanning four days in the George Morris Arena, and marking the eighth FEI competition hosted at the facility during the 2015 season. The finale of the six-week Tryon Fall Series will begin on Wednesday, October 20, and conclude on Sunday, October 24, with another strong week of CSI 3* competition ahead.

“Riding two horses in this class is definitely a luxury and either one of them has the chance to win any class in the world. They’ve both been at the CSI 5* level before and really can compete at any level. It’s just a big luxury and I’m very happy to be here,” said Rodriguez.

“This is my second day here in Tryon and I’ve heard great things. I was very impressed with the facility and this place has a great future for the sport of show jumping. Everything here, the lifestyle around the grand prix arena, people staying in cabins, five or six different options for restaurants and everything – I just think the future for Tryon is great and I’m looking forward to coming more often,” he commented.

Besting a class of talented entries, Rodriguez, who has had a phenomenal 2015 season thus far, remains fully aware of the importance of winning and how it impacts an individual’s confidence heading into the bigger ranking classes.

“When you win a class it’s supposed to be what we do. I don’t think people ride for second place and everyone wants to win, which makes for great rides. There were a lot of top riders in the class and there was a horse that I love, one of Ronan McGuigan’s, and he was in the jump-off with us and that always makes it very exciting,” he continued. “When you have a horse that you like so much and it’s in the jump-off with you it makes it pretty fun and good competition.”

Caballito is Rodriguez’s longtime partner who has been a mainstay in his top string for a number of years. Detailing their partnership, Rodriguez explained the importance of Caballito in his barn. “He is my old time partner. I won my first ever FEI ranking class on him five years ago and he’s been winning ever since. He won a great class this year in Barcelona and it was such a fast class. He’s a really awesome horse and he’s very consistent.”

While continuing to amass wins throughout year, Rodriguez has earned several top place finishes at some of the biggest competitions and venues around the globe including Spruce Meadows and the Furusiyya Nations Cup™ in Barcelona, Spain, this past September.

“We’ve been having a great year and I’ve been showing almost every week. I’m looking forward to a little bit of a rest in December, but still I have this coming week here in Tryon and then I go to HITS Thermal and Vegas. After that the year is over for us,” explained Rodriguez. “Next year is huge because of the Olympics and I think they’re going to come up so fast after Wellington in April and we’ll only have three more months until they start and the horses will need to be rested. I also need to be in a good mindset to be able to perform too.”

With the 2016 Olympic Games to be hosted next July in Rio de Janeiro, Brazil, Rodriguez already has an idea of which lucky mount will be aimed towards the historic event next summer. S.F. Ariantha has steadily improved throughout the season and has a talent that is unmatched according to Rodriguez. The duo also placed in finished fifth in the $127,000 Suncast® Grand Prix FEI CSI 3* hosted on Saturday, October 17, during Tryon Fall 5.

“I’ve never had a horse with that type of quality. She’s truly special. Everything she does is unique and she jumps her heart out. She was born to jump and she does it in such a way that we’re definitely preparing her for the Olympics next year and she’s going to try her first main CSI 5* class in a few weeks. Next year we’ll do a few of the big grand prix classes in Wellington and maybe Hamburg and Aachen, some of the big shows in Europe,” stated Rodriguez as he continued to praise the talented mare. “The Olympics are a dream for everyone and that’s a horse to dream with. She’s the first horse who has made me feel that I can actually dream like that.”

With another week of international competition ahead, Rodriguez will look to continue riding with the same winning prowess and determination he possessed throughout Tryon Fall 5, while simultaneously preparing for the conclusion of the 2015 season. Commenting on the hopes of returning to TIEC in the near future, Rodriguez elaborated, “I think the more and more Tryon has good riders and good levels I only see it improving. I think a lot of riders are going to come here and like it and I think the location of this place is in the middle of where we do most of our jumping which is in Florida and New York. I’m very happy that I made the choice to come here,” he noted.

Heather Caristo-Williams (USA) and Wistful, owned by Ralph Caristo, captured a major win in the first FEI class of the week during Tryon Fall 5, hosted on Wednesday, October 14, in the $34,000 Horseware Ireland FEI 1.45m Speed Stake. The duo stopped the timers in 63.86 seconds after finishing a quick and efficient round, which would be unmatched by any other combination in the class boasting 42 entries. Andres Rodriguez (VEN) and Caballito, owned by ARAO Enterprises LLC finished just behind Caristo-Williams in second place with a time of 65.15 seconds. Fellow Venezuelan rider Emanuel Andrade rounded out the top three aboard his own Bon Jovi, crossing through the finish in 65.29 seconds.

“I was really happy with my round today. She did absolutely everything I asked and I really don’t think I could have asked for any more from her. She was just so fast and careful. I had seen a couple of people go before me and they went quite fast and I wasn’t sure where I would be able to make up the time,” said Caristo-Williams. “When I walked the course before the class I thought it looked great. There were a lot of tight turn backs and I was pleased because my mare just handled them beautifully. It was a fantastic track. When we got to the last jump I was just holding my breath and you always want to go clear but the last jump was tricky and you weren’t done until you were all the way through the timers.”

Caristo-Williams took the ride on Wistful at the beginning of the winter circuit in 2015 and took an ample amount of time to get to know the 2003 Dutch Warmblood mare (Be A Grand Star x Power Lady) before testing her on the international stage.

“This is one of the biggest tracks that we’ve done together and I just feel very privileged to work with a mare as talented as she is. We’re going to head to Florida a little bit early this year and do some nice trail riding and give her some downtime before the start of next season,” explained Caristo-Williams. “I’d love to have her as my speed horse. She seems to love to go fast and she’s so careful. I also just love to go fast on her too. I’m very happy to just keep competing her in speed classes and you know if we get to go bigger then we do but if we’re very happy and competitive right here than I’m really happy here too.”

Caristo-Williams represented the United States in equestrian competition during the Furusiyya FEI Nation’s Cup series throughout the summer in Europe, including an appearance for Team USA at the CSIO 3* in Lisbon, Portugal. Continuing to work towards her goal of competing for the United States in major international competition, Caristo-Williams described her surreal summer and the impact it has had on her goals moving forward in the sport.

“My summer has been unbelievable. I keep thinking if I’m dreaming please don’t wake me up because all of my horses have really stepped up and the highlight has been being able to compete for the U.S. on Nations Cup teams in Europe this summer. That was really amazing for me and honestly just a dream come true.”

Caristo-Williams added comments about her team’s experience at TIEC in their first visit to the venue this year. “The show grounds are beautiful and with the barns, where the stalls are, everything is just so well thought out. The complex is incredible and I really think it is just amazing. We’re so happy to be here and I’m only sad that it took us this long to get here this year. We’re very excited to come back in the future.”

Hunter competition continued throughout the week at TIEC, offering a variety of classes and divisions for riders of all ages and experience levels. Liza Boyd, a name well-known on the AA-circuit and based in nearby Camden, SC, took home top honors in the $2,500 USHJA National Hunter Derby aboard 2004 Oldenburg mare Fieona owned by Kelly Maloney and Jack Towell. The duo also picked up a blue ribbon in the Performance Hunter 3’3″/3’6″ presented by Bruno Delgrange before their impressive performance in the only hunter derby of the week.

The duo earned a score of 87 in the first round of competition and returned to receive a 91 in the second round to finish the class with a total score of 178. Amy Nunnally of Charlottesville, VA and Cailler, owned by Carilynn Peyton, finished in second place after earning an 84 and 88 respectively for a final score of 172 while Amanda Forte of Glenmoore, PA piloted Look Again, owned by Rebecca Baker, to a total score of 167, which earned them a third place finish.

Amy Nolan of Wilmington, NC and Extra Credit, a 2006 Warmblood gelding owned by Missy Luczak-Smith, earned the tricolor in the Adult Amateur Hunter 3’6″ & Over division after collecting two first and two second place finishes in the over fences portion of the division. The duo also won the $500 NAL/WIHS Adult Hunter Classic 3′ with a two-round total score of 161.

For more information and to see a full list of results from Tryon Fall 5, please visit www.tryon.com.