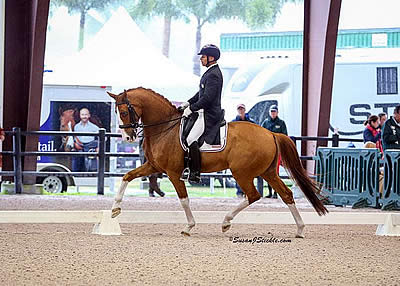 Commenting on his ride, Peters said, “He was a bit distracted coming in because the second he left the warm-up arena, he left all of his buddies behind. The ride started out pretty good, and then throughout the test he got a bit more distracted. That’s when we missed one four-tempi and the rest of the test was clean, just not as forward as he could go. Certainly, a good score, and of course I’m still happy with him.”

“It would be great if we could keep this placing,” said Peters. “I know that last week Adrienne (Lyle) did a wonderful job, (and) team Canada was very strong today, so it would be foolish to rely on this score. But he (Bailarino) is going to take a nice day off tomorrow, we are going to walk, and then Friday is another day!”