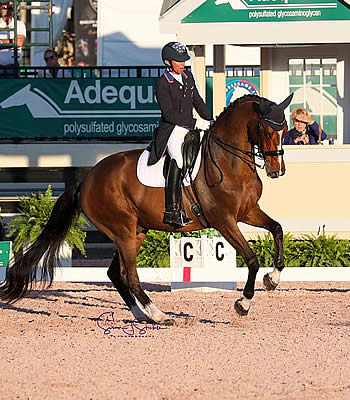 Wellington, FL – January 25, 2020 – It was Steffen Peters (USA) and Suppenkasper’s fourth test and their fourth win of the season in the atmospheric main arena at the 2020 Adequan® Global Dressage Festival (AGDF) at the Palm Beach International Equestrian Center (PBIEC) in Wellington, Florida.

This time, the all-conquering pair claimed glory from the 15 starters in the FEI Grand Prix Special CDI3*, presented by Blue Hors, with 75.702%. They received over 77% from two of the judges on the panel of five. The new combination of Denmark’s Agnete Kirk Thinggaard and Blue Hors Zatchmo finished second on 74.851%, with Canada’s Brittany Fraser-Beaulieu third on All In (72.064%).

Of Four Winds Farm’s elastic, uphill gelding Suppenkasper, Peters said: “Our warm-up system has been pretty good; we’ve been working him two hours before the test and then today I only did 15 minutes right before going into the ring.

“He stayed calm and I came in in a nice rising trot. Again he did a very clean test and that’s what we want for the team: consistency. The passage felt better and clearly there was a huge improvement in the right pirouette, which didn’t work out so well in the grand prix; actually, both pirouettes worked out beautifully today.”

The next task for the Olympic team bronze medallist is to accustom his latest superstar to the unique pressures and atmosphere posed by the Friday night freestyle classes under lights at AGDF.

“I talked to Debbie [McDonald], and now it’s time to turn up the power just a tiny bit. So I wanted four solid tests in this arena to settle him down for the freestyle, because that’s a gigantic hurdle for him in this arena — and of course there is a lot to stake for the World Cup qualifier,” added Peters, referring to the freestyle scores needed to qualify for the World Cup Final in Las Vegas in April.

Peters has a plan to help Suppenkasper: “Here in Wellington we are staying at Five Rings Farm — probably the finest equestrian facility I’ve ever seen in my entire life — and they have an amazing sound system, so now at home we’re going to practice the clapping, the music, and the national anthem, because even that seems to get him going. He’s so ready to go, now it’s just a question of desensitising him a bit to the music and, with a little bit of good luck, we can do a hell of a freestyle in here.”