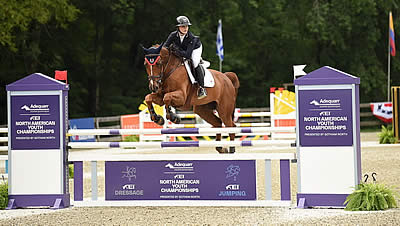 Rebranded with a new title after more than four decades as the North American Junior and Young Rider Championships, the 2018 FEI North American Youth Championships brought together some of the brightest young stars in the sports of show jumping and dressage. With numerous zones and regions represented, the United States dominated the podium, but a new division proved that Canada has an incredibly strong group of youth competitors coming up through the ranks.

For the first time in its 44-year history, a children’s division of show jumping was added to the Championships, showcasing riders in the 12-14 age bracket. Capitalizing on this new opportunity was Team Canada, consisting of Charlotte McLaughlin (Bronan), Stella Chernoff (Filia van de Bisschop), Eric Krawitt (Wellington), and Olivia Stephenson (Chaccana). The quartet was positively dominant on the day, finishing on a perfect score of 0 to win the inaugural USHJA North American Child Rider Show Jumping Team Championship at the FEI North American Youth Championships. The silver medal went to the combined team of Zones 3, 4, 5 and 7 on 12 faults, while Mexico earned the bronze with a score of 20.

Both Charlotte McLaughlin, 14, and Olivia Stephenson, 12, put in double clear efforts for their team.

“This has been a goal of mine since I started riding when I was six,” said McLaughlin, Ottawa, ON. “I’m so proud to be doing this at such a young age. I never thought it would happen so soon, but I have to thank my amazing coaches and [chef d’equipe Beth Underhill] so much for this opportunity. It’s been amazing.”

The individual title came down to a three-horse jump-off, as Canadians Stephenson and McLaughlin, along with Guatemala’s Valentina Arenas Saravia, finished on perfect scores of 0 after three rounds of jumping. Ultimately, Stephenson prevailed over a final shortened track to claim the USHJA North American Child Rider Show Jumping Individual Championship. McLaughlin was silver, and Arenas Saravia received the bronze medal.

It was redemption for Charlise Casas (Rembrandt Blue), Alexandra Pielet (Helene VE), from Zone 5 in the USHJA North American Junior Show Jumping Team Championship. Casas and Pielet, both 17, finished out of the medals when jumping for their zone in 2017. Alongside team newcomers Paige Matthies (Dirkie Z) and Emma Kurtz (Pippi), they went all the way to the top of the podium in 2018, claiming gold with 17.88 penalties. Mexico West received the silver medal, and Canada was bronze.

“Being on a team has always been a dream of mine, but to win gold on team with my three best friends is a dream come true.” — Alexandra Pielet (Zone 5)

The competition was close in the quest for the USDF North American Junior Dressage Team Championships. Caroline Garren (Bell Angelo) clinched the gold medal for Region 3 with a team-high score of 68.606%. Juliette Cain (Mariska), Melanie Doughty (Fascinata), and Isabelle Braden (Dali de la Ferme Rose) joined her atop the podium; they combined for a team total of 202.787, just ahead of an even closer race for silver. Region 4 (199.362) clinched that medal, while Canada Central (199.151) earned bronze.

U.S. riders claimed the top two spots on the podium in the USDF North American Junior Dressage Individual Championships. Garren was again atop the podium, riding to a score of 70.147%. Region 4’s Bianca Schmidt (Lou Heart) was silver, and Canada’s Chase Robertson (Winsome) received the bronze medal. The two riders finished with not only identical scores (70.029%), but also the same collective marks, so the collective mark from the judge at C became the necessary tiebreaker.

“The feeling is so amazing,” she said. “It’s been a really wonderful experience growing and learning with [Bell Angelo], so to see all those years of work payoff is really exciting.”

Robertson didn’t need a tiebreaker when she rode to top honors in the USDF North American Junior Dressage Freestyle Championship. This time, her 73.775% score put her safely at the top, while Schmidt (71.905%) received the silver medal, and Garren (71.490%) rounded out the podium with the bronze.

All four riders have already competed against seniors at the international level, with Strauss and Goetzmann both having jumped in five-star competition Spruce Meadows (CAN) in the past year.

“I’m so excited to help add a gold medal to Zone 2’s long list of medals,” said Strauss, 19. “We’re all extremely grateful and proud to represent a team that’s historically been so successful. There are so many riders who rode for Zone 2 who we all look up to today, like McLain Ward, Georgina Bloomberg, Reed Kessler, and the list goes on. We’re really thrilled to be here and to have the opportunity to gain this team experience.”

Daisy Farish (Great White) was nearly perfect in the USHJA North American Young Rider Show Jumping Individual Championship. The 17-year-old representing the combined team of Zones 4 and 5, and her 10-year-old Holsteiner gelding finished on a score of four after three rounds of jumping. Cohen earned a second medal with an individual silver (5.14), while Zone 1’s McKayla Langmeier (Durosa W) was the individual bronze medalist (6.28).

The combined Dressage Young Riders Team of Quebec and Alberta was the only group consisting of just three riders, meaning the trio would not have the luxury of having a drop score. But that did nothing to stop them, as Rakeya Moussa (Davidoff v.h. Trichelhof), Beatrice Boucher (Delfiano), and Camille Carier Bergeron (Baldacci) claimed the gold medal for Canada with a team total of 210.145. Region 4/7 finished with the silver medal and Region 1 earned bronze.

Zone 2 was kept off the podium despite team member Callie Jones (Don Philippo) delivering the day’s highest score, 71.823. But the 20-year-old only had to wait a day to get her podium moment. She won the USDF North American Young Rider Individual Championship with a score of 72.20%. Boucher, earning her second medal of the Championships, was the silver medalist, and Kayla Kadlubek (Perfect Step) of Region 1 was bronze. Anna Weniger (Don Derrick) moved up the podium to top the USDF North American Young Rider Dressage Freestyle Championship after contributing to a team bronze medal for Region 1. Her score of 74.225% catapulted her to the top of the leaderboard, just ahead of Boucher (72.800%) and Jones (72.775%).

“I have been fortunate enough to ride on some young rider teams the last few years, but winning an individual medal is way more than I ever imagined,” Weniger said.