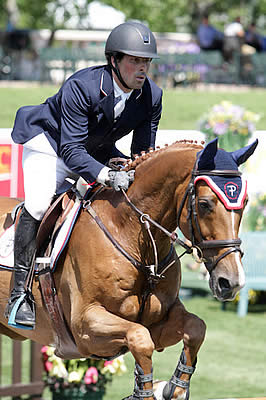 Wednesday’s Paramount Resources Prix des Nations 1.40m and 1.30m competitions were each held in the beautiful Meadows on the Green arena and featured courses designed by Ireland’s Alan Wade.

The Paramount Resources Prix des Nations 1.40m was held first in the afternoon, with three teams competing, and a win for Mexico’s team “Chilangos” led by Chef d’Equipe Nikolaj Hein Ruus. Mauricio Huesca and Fair Force II Berkenbroek led the team off, with one time fault in round one, and a clear trip in round two. Gerardo Pasquel and Big Red jumped double clear to help their team take the victory. Sofia Larrea and Remmits Delphi carried scores of four and eight in their respective rounds. As the anchor rider, Francisco Pasquel jumped clear in round one with Heart Winner V Gurbrue Ch, and did not need to return for round two after his team had the win secured.

Following a great day with two clear rounds for his team, Gerardo Pasquel spoke of the victory, as well as his mount Big Red. The 11-year-old Warmblood gelding (Ludwig von Bayern x Lamoureux I) had a successful year competing with Nikola Hein Ruus, and then USA’s Richard Spooner, before Pasquel took back the reins recently.

“We have had him for almost three years,” Pasquel detailed. “I stopped riding him for one year because Nikola showed him. He went for the $1 million dollar competition in Saugerties, NY and placed second. After that we made a plan with Richard Spooner to try to make the U.S. team for the Olympics, so he rode the horse for the first half of the year. He did super through the winter in Wellington, FL and then he jumped on the U.S. Nations’ Cup team in Mexico where they were second. After the process was finished, we always talked about me riding the horse again, and I just started riding him again two weeks ago.”

Pasquel is competing for the first time at Spruce Meadows this summer and Wednesday was also his first time competing in a team event.

“I quit riding for 16 years, and I just started riding again four years ago,” he explained. “This is my first time at Spruce Meadows and I think it is the best place I have ever seen for horses.

“The people at Spruce Meadows make it feel so important for the riders,” Pasquel continued. “It is the best feeling in the world. They make it special at every single level. You can start riding from 1.10m and it is the only place in the world where they treat you like a champion in any competition. I think that is very important for the sport. In other places, it is only about the professionals and the top riders. Here, they treat everyone like the best.”

The Paramount Resources Prix des Nations 1.30m was the final competition of the day in the Meadows on the Green. Nine teams started in the first round, with the top four continuing on to round two, and a win for USA’s “Ritter’s Rascals” led by Chef d’Equipe Nikko Ritter. Claire Schreder and Quality II led the team off, with a clear in round one, and just one time fault in round two. Sydney Hutchins and Chantal scored nine and four in their respective rounds. Kelsey Maloney and La Coco jumped clear in round one and dropped one unlucky rail in round two. As the anchor rider, Coco Fath rode Catachi to one time fault in round one, and then secured her team’s victory with the final clear round of the night.

The “Jumping Jac’s” finished second led by Chef d’Equipe Jaclyn Duff. Their team was made up of Julia Madigan (CAN) riding Vintovara, Elena Fernandez (PAN) aboard Balou, Gabriella Mizrachi (PAN) with Game Boy, and Ali Ramsay (CAN) on Disarrono.

Fifteen-year-old Coco Fath did not let the pressure of going last keep her from putting in a clutch performance to help her team to the win. Fath was riding the 11-year-old Dutch Warmblood gelding Catachi (by Caretino) that she has jumped at the 1.30m-level for the past year.

This was Fath’s second time competing in a team event, but a big deal for her first year jumping at Spruce Meadows.

Commenting on the competition, Fath stated, “After the first round I realized I was too slow, which was disappointing, but it made me want to do better in the second round. I went in there and I wanted to win. The pressure did not really affect me. I just wanted to go in there and give a good, clean round.

“It felt really good doing it for the team,” Fath added. “I feel like I accomplished something, not just for me, but for three other people too. I think it was a better experience winning as a team and I think it will help me later as I go on to other things.”

Speaking of Catachi, Fath smiled, “He has been great. He has a little trouble in the schooling area, but he is always perfect in the ring. You can always count on him.”

The Spruce Meadows ‘Pan American’ Tournament CSI 5*, presented by Rolex, continues on Thursday featuring the Friends of the Meadows U25 Cup, followed by the Cargill Cup 1.55m and the Mercer Cup 1.45m to conclude the day’s competition.