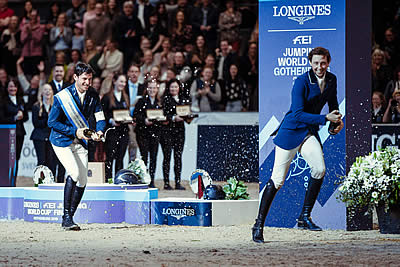 Swiss Jumping stars Steve Guerdat and Martin Fuchs will see their long-standing sporting rivalry play out in the polls as the public vote for the FEI Awards 2019 opens.

An impressive billing of equestrian athletes, individuals, and projects have been shortlisted across five Awards categories following the FEI’s call to action for nominations from the global equestrian community.

Flying the flag for 15 nations on five continents, the 22 shortlisted nominees have been selected for their outstanding achievements on the field of play, inspirational outlook, and unparalleled dedication.

The 2019 Awards winners will be celebrated at a star-studded ceremony at the State Kremlin Palace in Moscow (RUS) on 19 November.

The public has from 25 September to 7 October to cast votes for their heroes. Make sure you have your say and vote here.

Shortlisted nominees for the FEI Awards 2019 are:

FEI Solidarity – for an FEI Solidarity or equestrian development project, an individual or organisation that has used skill, dedication, and energy to expand the sport.

The winners will be decided through a system in which 50% of the public’s vote and 50% of the judges’ votes will be combined to give the final result. The nine expert judges are as follows: