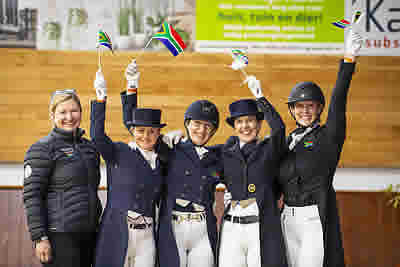 It was a big moment for South African Dressage when qualifying a team for the Tokyo 2020 Olympic Games at Hippisch Centrum in Exloo, The Netherlands.

The only country to field a side in the Group F (Africa and the Middle East) qualifier incorporated into the CDI 3* Grand Prix at the Dutch fixture, the foursome of Tanya Seymour, Laurienne Dittmann, Gretha Ferreira, and Nicole Smith produced solid performances to make it happen.

This was the final Tokyo slot to be filled, bringing the total number of nations that will line out in Japan next summer to 14. The full list of qualified countries in Dressage is now Australia, Brazil, Canada, Denmark, Germany, Great Britain, Ireland, Japan, Netherlands, Portugal, South Africa, Spain, Russia, and the USA. Teams in Tokyo will consist of three riders.

All four South Africans who competed are based in Europe, and the most experienced of all is Seymour who lives in Addrup, near Vechta in The Netherlands. The trail-blazing 35-year-old was a member of her country’s first-ever team at the FEI World Equestrian Games™ 2014 in Caen, France, and was also the very first South African athlete to compete in Olympic Dressage when lining out at the Rio 2016 Games.

Seymour finished individually 18th at the FEI Dressage World Cup™ 2019 Final in Gothenburg, Sweden last April and all of her major results have been recorded with the 17-year-old Ramoneur who she steered into ninth position in this Grand Prix with a score of 67.065. She clearly adores the Oldenburg stallion with which she has achieved so much, and she’s planning his campaign for the coming months very carefully. He’s the one she would like to take to Tokyo.

“If all stays well and if he’s still happy and sound that would be the plan,” she said. “I’ll play it by ear; he loves his job, he’s still bucking and playing, and he’s in a great place at the moment. What I’d love to do with him now is to qualify for the World Cup Final in Las Vegas next April and then take him to Tokyo before giving him a very well-earned retirement after that!”

Gretha Ferreira and the 14-year-old mare Lertevangs Lavinia followed Seymour into the ring and posted 63.652 for 21st place in the field of 27 starters. The 30-year-old rider who hails from Johannesburg and is trained by top Danish rider Daniel Bachmann Andersen only started this mare at Grand Prix level in March of last year. So it was some achievement to make it to the FEI World Equestrian Games™ 2018 in Tryon, USA last September where they finished 66th individually.

First of the South Africans to compete was Laurienne Dittmann with the Hannoverian Don Weltino K. The German-based 48-year-old who was awarded the Golden Rider Badge by the German NF in 2018 posted a score of 62.239 for 23rd place. And last to go was the youngest South African representative, 28-year-old Nicole Smith, who looked set to finish inside the top-10 until penalised for a costly mistake in the one-tempi changes with the 12-year-old KWPN mare Chi La Rou which saw them complete in 18th on a mark of 64.913.

The Grand Prix was won by The Netherlands’ Jeanine Nieuwenhuis partnering TC Athene, with Sweden’s Michelle Hagman Hassink placing second and another of the Dutch contingent, Lynne Maas, slotting into third with Eastpoint.