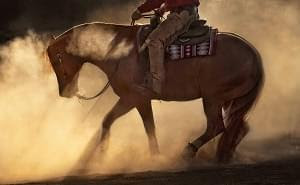 The rollback consists of three separate maneuvers – a stop, a 180-degree turn and a lead departure. The rollback should be one continuous, fluid motion. However, this is easier said than done. National Reining Horse Association $3 million-dollar rider Craig Schmersal describes some of the techniques he uses at home to ensure precise rollbacks.

1. The first thing you need on a horse before teaching the rollback is suppleness. He must be willing to give his face. Using two hands, if I pull his head to the right, I only want him to move his head. I do not want his body to move to the right until I add the left neck rein.

2. The horse needs to know how to yield to leg pressure.

3. The horse has to know how to back up. When I take hold of him and back him up, I don’t want to be pulling him back. I want him to back up on a fairly loose rein.

I want the horse to almost lock in the reverse position in the backup. I then apply the outside rein to see if the horse will step into a turn by himself. If he doesn’t, then I’ll take my direct rein and pull him through a time or two into a good spin and a half or two spins.

I’ll stop, back up and ask him with the neck rein again. I don’t want to crowd my horse too much, especially in the beginning steps of learning the rollback.